Can you reinforce a dog’s fear by petting and talking to him when he’s scared?

This topic was difficult for me to write about. I never did come up with a clear answer to the question, and I hope this post will be a place for honest discussion. I’d love to hear your thoughts in the comments.

Can you reward a dog’s fear by offering affection?

If only there were an easy answer!

I consulted with several professional dog trainers for this post, including Anthony Newman who runs Calm Energy Dog Training. He turned the question around and asked me what I thought. Here’s a summary of what I said:

It’s always worked to comfort my dog when his fear does not result in aggression. For example, when he’s scared of a tornado siren, he will curl up on his bed. This doesn’t bother anyone, so I will calmly pet and talk to him – or ignore him, which is probably not so nice! When aggression is involved, like barking at a stranger, I try not to give affection. I distract him and reward calm behavior.

After all my research for this post, this is what it comes down to for me. Offering comfort to a frightened dog is not going to do any harm. However, if the dog is showing inappropriate behaviors because of that fear – barking, pacing, growling – then we need to find a way to teach and reinforce a more appropriate behavior.

“We have to keep in mind that fear is an emotion, not a specific behavior,” said professional dog trainer Joan Hunter Mayer, owner of The Inquisitive Canine. We reinforce or punish behaviors, not emotions. 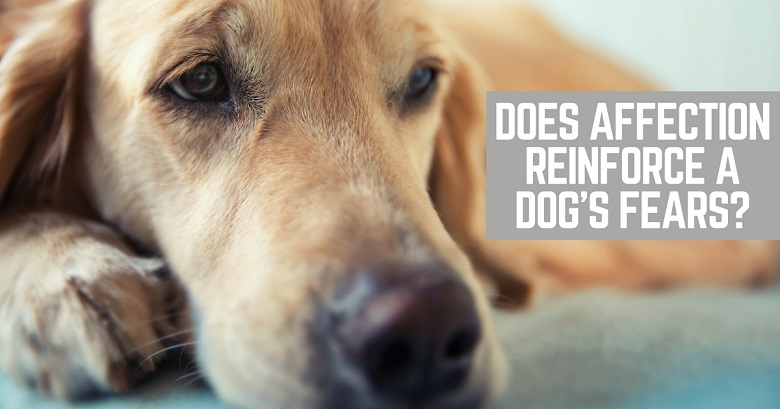 Newman also said fear will not be reinforced because reinforcement comes from giving a reward.

“A truly fearful, anxious dog in a high-trigger situation, like thunderstorm-phobia, simply won’t care about the cuddling,” he said. The dog won’t be able to experience it as a reward.

Why is this a tough topic?

One reason this topic is difficult for me is because we don’t all agree on how fearful dogs interpret our affection.

Professional dog trainer Ty Brown of Dog Behavior Online said he believes an owner’s affection can likely reinforce a dog’s fearful behavior because there is a disconnect in communication between the two species.

A great example of this is when a fear-aggressive small dog is barking and growling at strangers from her owner’s arms. Brown said he sees this a lot with little dogs.

“The dog is feeling fearful, and the owner is saying through voice and body language, ‘What a great job. That’s right. I support the state of mind you’re in,'” Brown said. “It’s a form of enabling and doesn’t teach the dog how to deal with that fear.”

I agree. Coddling a fear-aggressive dog will not help her build the skills she needs to deal with her fears in the future.

“It is important to remember in any dog training that dogs are not primates,” said professional trainer Rob Peladeau of Refined K9. Many of the things we do to help our children in fearful situations do not translate to the canine species. 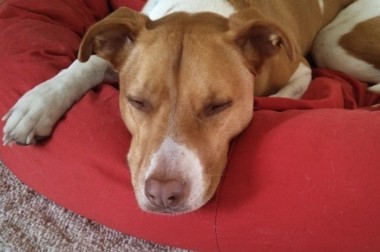 Yet, some trainers say offering comfort could help a dog feel better in the moment, at least in some situations.

In her 2011 YouTube video “Calming A Fearful Animal,” professional dog trainer Suzanne Clothier said dog owners should offer affection to their scared dogs. But in order for that affection to be helpful, it needs to be quiet, firm and clear – not frantic.

“Everything in my body language, my movements, my tone of voice, how I touch the animal, has to say, ‘I know that’s scary for you. I got your back here,'” Clothier said.

Brown also wants his clients to comfort their dogs whenever the dogs are scared or stressed, and he said the best way to do that is through structure.

“I want them to do it in a way that leads to growth on the dog’s behalf,” he said. “For example, a dog that is stressed by outside thunder could be best soothed by being given a command to lie in a bed and stay put.”

This is typically what I do with Ace, and once he is in a calm state, he is able to receive affection as a reward for his calm behavior. While there are different ways to offer comfort to our dogs, the long-term goal should be to figure out how to get rid of the dog’s fear or help him learn to deal with that fear. 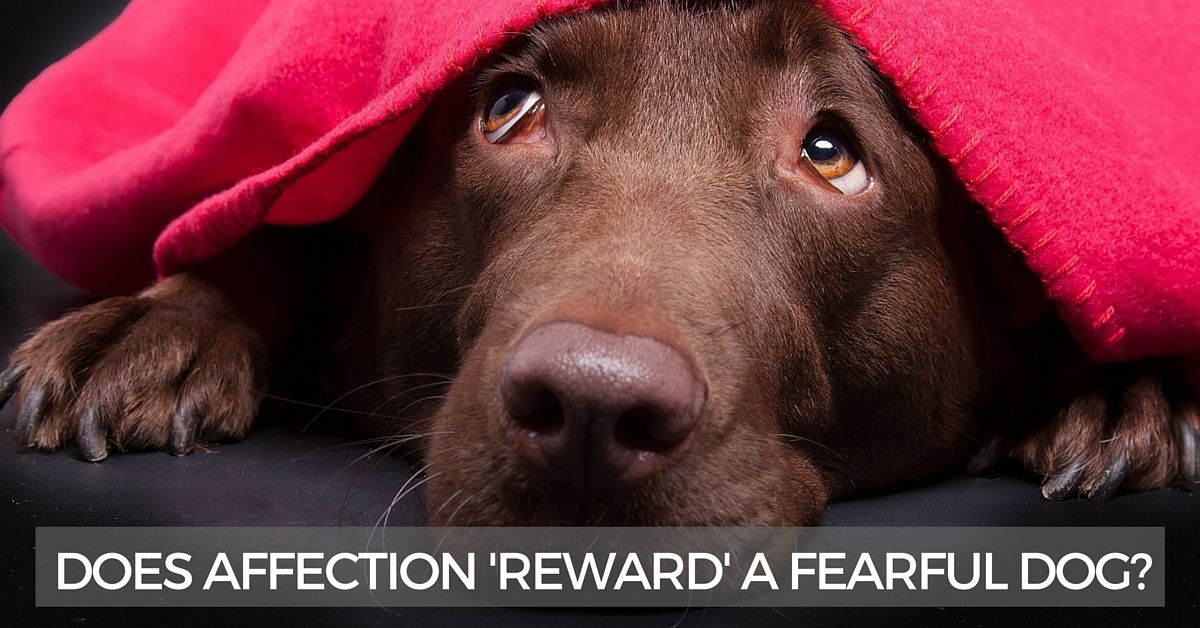 How to reinforce appropriate behaviors.

I always try to reinforce the behaviors I want from my dog, no matter what state of mind he’s in. This is especially important when aggression is involved, no matter how minor.

For example, my dog gets scared when strangers approach us in certain situations. He responds by barking, and this is a behavior I generally don’t want to reinforce.

I can reassure my dog with affection all I want – “It’s OK. It’s OK.” This may or may not affect my dog’s emotional state, but it’s not going to stop the unwanted barking. I know him well, and while he may bark less, he’s still going to bark.

Ace will stop barking, however, if I calmly put him in a down/stay position and ask him to focus on me – “watch.” His brain has to focus on something other than being scared – obeying my commands. I prefer not to use treats, but if treats bring out the behavior I’m looking for, then so be it! All I care about in that moment is reinforcing the right behavior.

Dr. Patricia McConnell,  a certified applied animal behaviorist, wrote a post on her blog about how you can’t reinforce fear through affection. One of her examples is when a fearful dog is barking at visitors. She wrote that if the “strangers” toss treats at the dog, the treats would not “reward” the dog’s fear. Instead, the treats would actually decrease the fear, which would eventually help the dog change his behavior (I love treats! Strangers bring treats! I love strangers!).

Do you see how both these approaches could help a dog? It all depends on the individual dog, the unique situation and the owner’s consistency. 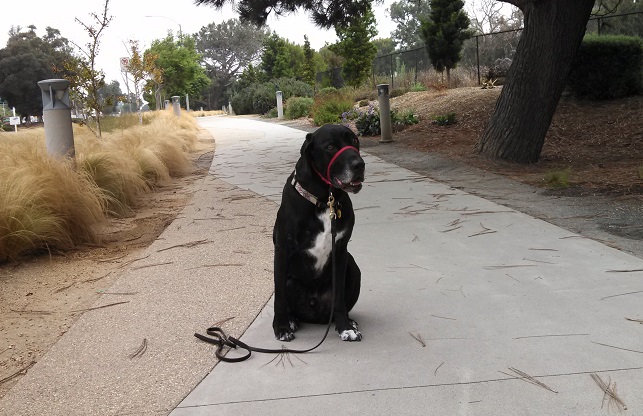 Why you should block inappropriate behaviors.

Another factor – regardless of whether or not we give affection – is that a dog’s own actions can actually make the dog feel more fearful, according to McConnell in the comment section of the same post.

For example, if the dog is lunging and barking at a stranger, the lunging and barking and getting worked up could make the dog feel more afraid. This is why it’s so important to prevent, block or stop these types of behaviors. Then, teach and reinforce “good” behaviors such as sitting quietly. 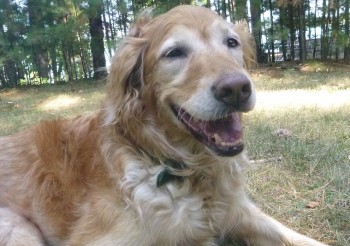 If I want my dog Ace to be calm, the first thing I need to do is be calm myself.

If Ace is scared of an approaching stranger, and I choose to frantically pet my dog while repeating “It’s OK! It’s OK!” while we run away, what am I communicating to him? I’m telling him, “I’m scared, and you better be scared too!”

Isn’t this the perfect example of how our affection can actually make a dog more fearful? I think so, but I’ve love to hear what you think. At the very least, it’s not going to help the dog feel any less afraid.

How else can dog owners help their fearful dogs?

In going through a list of all fears and anxieties, Brown said he can generally find obedience behaviors that:

“For that reason, we always put a lot of emphasis on advanced obedience with all of our clients,” he said.

What do the rest of you think? Are there situations where affection can reward a dog’s fears?

How to help a dog overcome a fear