Home » Dogs with fixations (part one)

My mutt has a fixation

Note: This is part one of a three-part series on my dog’s tennis ball obsession. Click these links to read part two, 10 signs your dog has a fixation and part three, Breaking Ace’s fixation.

You’ve heard me joke about it, complain about it and then half-heartily try to fix it. My mutt has an addiction to tennis balls. But not just tennis balls – any kind of ball, any dog toy, stuffed animal and anything round, really. And if there are no toys in sight, he brings me rolled up pieces of paper from the trash, candy bar wrappers, bottle caps, rubber bands, cat toys. Lately he’s been bringing me my hair ties. And if we’re outside with no ball, the fixation becomes sticks – usually just one stick in particular. He literally will not stop dropping a stick at my feet (whether I throw it or ignore him makes no difference) as long as that stick remains within sight or scent distance – and he has a good nose.

The mutt will not eat, drink, relieve himself, respond to commands or break a stare from whatever it is he happens to be fixated on unless I physically remove the object and put it in another room or a closet. If we are outside and he is fixated on a ball or stick, he loses all logic as far as overheating, getting too cold or responding to pain (cut feet from ice). 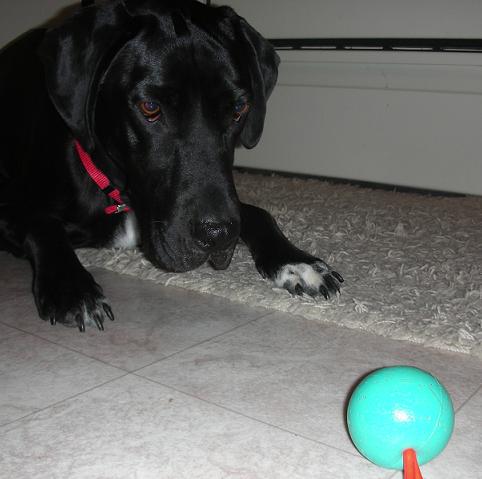 I’m not trying to say playing fetch is a bad thing. After all, my mutt is part retriever, he was bred to retrieve. Well, at least his relatives were. But retrieving should be fun for a dog – a game or a job, not a matter of life and death.

I have a strict plan to help Ace, but first I want to share how the mutt got this way. There is no way to know exactly what happened, this is just my guess based on what I know about Ace’s past, my mistakes and dog behavior in general:

Ace did not live with me for the first year of his life. He was adopted by a mother and daughter who already had one other dog and a cat. The mother told me she ended up adopting Ace because she felt obligated to take a pup from a litter where the mother dog was owned by someone she knew. She decided Ace could be her daughter’s dog and hesitantly brought the puppy home.

Well, this didn’t go so perfectly. Ace was never mistreated, but the daughter didn’t take an interest in him. She was a teenager and was gone at school and other commitments during the day. The mother, of course, worked a full-time job. This left very little time for either of them to spend with young Ace, who ended up living most of his life in a kennel. He was never walked and never trained to do anything other than go to the bathroom outside.

And here is where I begin guessing and putting the pieces together: Dogs need to be walked. It is that simple. And dogs that aren’t walked begin taking their energy and frustrations out in other ways. Some become destructive indoors. Some bark and cry nonstop. Some become aggressive. Others become obsessed with chasing their tails, small animals, shadows, lights – or- a ball.

Playing fetch became Ace’s one way to get attention from his family members (shoving a toy in their laps until they became annoyed and threw it for him). It was also the only way he knew how to release pent-up energy. I’m sure as soon as Ace became annoying enough in the evenings, he was sent right back into his kennel for the night.

The best thing that family ever did for Ace was put him up for adoption.

Along came me. I adopted Ace becasue he got along great with other pets, was housebroken, kennel trained and looked athletic enough to be my new running buddy.

I immediately began Ace on a structured training and exercise program the day I brought him home. This helped him learn the rules of my lifestyle and drained much of his excess energy. But the very first morning I owned Ace, he began bringing me his tennis ball. And what did I do? I threw it. And I kept throwing it. He brought it back and dropped it at my feet every time. It was adorable and cool to have such a great retriever.

The first thing my boyfriend Josh and I did was take Ace outside where we could throw the ball further. We soon learned Ace didn’t even have to be leashed if a ball was involved because he would never leave our sight as long as we’d keep throwing the ball. Perfect! A dog that stays at our sides unleashed and retrieves!

Well, I’m sure you see what I did wrong. I encouraged a behavior that was already a problem for Ace, only I didn’t notice. I did run him every day, but I also played ball with him at least twice a week. I was feeding the problem, just like friends who keep bringing their alcoholic buddy to the bar.

Of course, I soon realized my dog had a problem, but I wasn’t quite sure how to fix it. I thought more and more on it until I did realize how to fix it, but the challenge has just been too daunting until now. No addiction is easy to fix.

I finally feel like I know enough about where the problem began and what I need to change in order to help my dog. Ace is not happy when he is in that obsessive state. He is in a zone and a very unhealthy state of mind.

Click these links to read part two, 10 signs your dog has a fixation and part three, Breaking Ace’s fixation.

I've thought of never throwing the ball for Ace, too. Good to hear that it's worked for you.

That could be Vance's story, too. Only he actually did chase the ball one day until he completely overheated because I wasn't paying enough attention. (We live in the south, I don't throw a ball very far, and I'd actually only thrown it 9 times, but I was distracted and having a bad day [which is why I was counting each throw--we were going to do ten and then stop] and it was really hot and he was young... It was scary, but fortunately, there are no lasting effects, five years later.) Anyway, for us, we stopped ever touching the tennis ball. He's allowed to have them and can carry them around, but no one throws it for him, ever. He still gets a little too focused on it now, but he hears us when we tell him that's enough. It's really nice to know Vance isn't the only one with a tennis ball fixation!

I'd work with her on just a regular leash before you start with the long leash. If you can't control her on a six-foot leash around other dogs, it won't be safe to trust her on a longer rope. But anything would be better than having her off leash at this point. It's not so bad that she's fixated, but that she could nip at other dogs.

My 2 yr old standard poodle, Averna, gets fixated on other dogs. Small dogs, large dogs, she's indiscriminate, but definitely fixated. She stops responding to commands, her body stiffens with tail and head held high. She carries her ball in her mouth while harrassing the other dogs, but if she has been known to nip them in the butt. I thought I might try working her on a long line while around other dogs to work on her recall and maintain some control, but am worried about dogs getting tangled in the line.

My dog, Duke, has a ball obsession. He will at times fall asleep with the ball in his mouth!