Cairn terriers are more than just the “Totto” dog. They love children and can make a great family pet, but they also require a long walk every day along with mental challenges.

Cairn terriers were originally bred in Scotland during the middle ages to kill mice and rats, according to the Encyclopedia of Dog Breeds by D. Caroline Coile. They were used to chase small animals from piles of stone used as landmarks, called cairns. The breed is very closely related to the Skye terrier and the West Highland terrier and became popular in America after Toto starred in “The Wizard of Oz.”

Cairns weigh about 13 or 14 pounds, which makes them a nice, lap-sized dog. They come in colors ranging in shades of white, red, gray or black. Cairns have a shaggy outer coat and a softer undercoat. Many breeders recommend stripping the coat twice a year, which gets rid of all the dead hair by pulling it out by the roots, but stripping the coat is not necessary. 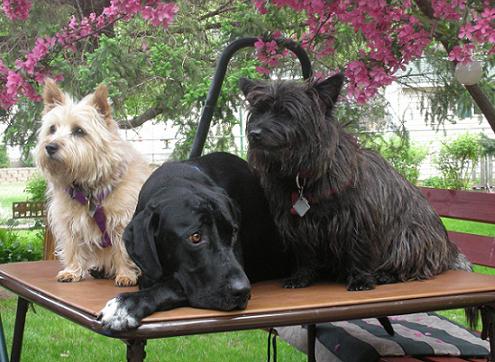 Advantages to owning a cairn terrier:

1. Cairn terriers are playful and affectionate. My grandparents have had cairns for as long as I can remember, and every one of them has loved attention. In fact, they will crawl right into your lap and demand it if they have the chance!

2. Cairn terriers have very few health issues. I could not find any health problems common among cairns, likely because they are not overbred in the United States like so many breeds. Because of their small size and few health problems, cairns have a long life expectancy of at least 14 years. A few eye issues are becoming more common with cairns, including cataracts and ocular melanosis.

3. They are intelligent. This doesn’t mean they are easy to train, because they will challenge you. But they are hard working and really do want to please their owners.

4. Cairn terriers are tolerant around children. They typically get along well with other dogs, too, even dogs five times their size. They are tough little dogs that are rarely fearful, and they can handle some rough housing from kids and bigger pets.

5. They can handle the heat and cold. Although cairns do best as indoor pets, they do not overheat easily. Their coats also keep them warm in cooler temperatures as long as they are not outside for too long.

Disadvantages to owning a cairn terrier:

1. Cairn terriers are typically high-energy dogs (they are terriers, after all) and require a long daily walk even though they are little.

2. Cairn terriers need mental challenges. They are smart dogs and get bored easily if they don’t have something to do. They are great at agility and also compete in earthdog trials, where the dogs navigate through manmade tunnels.

3. They are often barkers. A cairn will let you know if a stranger is approaching, but if they don’t get enough exercise or training they will get carried away with the barking and also alert you to every bird, every passing car and even the wind blowing. No one likes to hear a little dog yapping out in the yard all day, but cairns are very alert and likely to be territorial if they aren’t given any rules.

4. They can be diggers. Cairns have a strong instinct to search for small animals burrowed underground.

5. They are often unfriendly to small animals. Cairns were bred to kill vermin, so of course they want to hunt gophers, rabbits, birds and whatever else they can find. If you have a small pet and are interested in a cairn, make sure to introduce the two pets properly and with caution because of the cairn’s strong prey drive.

If you would like to write a profile of your favorite breed, send me an email at Lindsay@thatmutt.com. I’ll use pictures of your dog and link to your site. I’m happy to feature any breed! Click breed profiles to see all the breeds that have been featured.

Hi Laura, thanks for stopping by. Cairns are tough little dogs, aren't they? Thanks for sharing about Ty and Redd.

My Cairn is affectionate, but only when HE wants to be. He stays an arm's length away until he deems it time to curl up on a lap.

Also, his best friend is my brother's Doberman. They love to wrestle, and we honestly never know who'll win the match until one has the other pinned down. That's right, my 14 pound Cairn can actually take down the 60 something pound Doberman.

It's funny how they've learned from each other. Redd (Doberman) has acquired some of Ty's (Cairn) habits. Ty has learned to use his front legs more. Unfortunately, this includes pulling the covers back in the morning and pawing at my head when he wants to go outside....

do your carins stare at you like there is no tommorow

me and my girlfriend are going to get a cairn terrier probably this fall. can't wait!!!

Because Cairn terriers are both intelligent and playful they can be taught a variety of doggie games. They can easily make it to show dog championships for the same reason.... Of course you need a lot of patience to train them though....