I love American Staffordshire terriers, also known as the American pit bull terrier or “pitbull.” With so many pitbulls sitting in shelters across the country (more than 9,000 on Petfinder alone), I thought I’d share how great these dogs are. My next dog just might have to be a pitbull. The guy in this photo is Matty, and he needs a home. (9/21/09 update: Matty has been adopted!)

Staffordshire terriers have a bad reputation because they have been used as fighting dogs since the 1800s when they were first bred in the United States, according to the Encyclopedia of Dog Breeds by D. Caroline Coile. They are known as pitbulls because they would fight other dogs in “pits.” However, be aware that the term “pitbull” refers to a group of dogs, including the American Staffordshire terrier and the Staffordshire bull terrier. Several similar breeds are often inaccurately slapped with the name pitbull such as the Cane Corso, the American bulldog and any mix resembling these breeds. 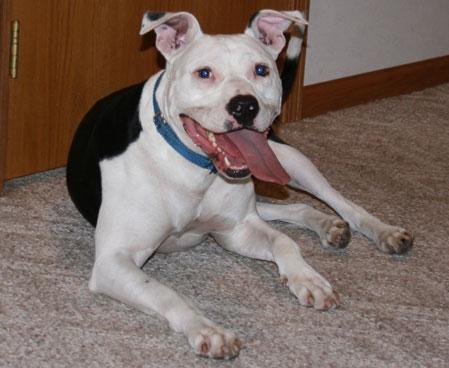 American Staffordshire terriers were bred to be affectionate to people because their owners had to handle them even in the middle of a dogfight. Because of this, Staffordshires are friendly to strangers and generally love children and make loyal family pets.

1. Staffordshires are playful and gentle around people. They love children and affection. This is why it is so sad to see a Staffordshire terrier unsocialized and tied up in a yard all the time. These dogs thrive off of human interaction and companionship.

2. Staffs require very little grooming. Their coats are short and smooth. They still shed, of course.

3. This breed is easy to train because of its desire for attention and to please its owner.

4. Staffordshires make great watchdogs and will protect their owners if threatened. Unfortunately this trait is abused when owners encourage their Staffordshires to be aggressive.

5. They are beautiful dogs to look at, with muscular bodies and a strong, sturdy appearance with smooth, shiny coats.

1. Staffordshire terriers require dedicated owners who will give them the training, attention and exercise they need. They are powerful dogs and need their owners to encourage the gentle side of the breed and provide positive outlets for their dogs’ energy.

2. Staffordshire terriers have an inaccurate reputation for being aggressive. Of course, this is the same as assuming one nationality of humans is aggressive. If you own a Staffordshire, some people will be afraid of your dog and you will be treated differently just for owning one. If your dog so much as growls at another dog, expect other dog owners to freak out even though the same behavior would be tolerated from a Yorkie, a golden retriever, a beagle or many other breeds.

3. Many laws ban “pitbulls,” especially apartment complexes and some cities. Be aware of the inconveniences and stereotypes you will have to deal with if you own a Staffordshire.

4. Staffordshires need to be properly socialized around other dogs and small animals. Because they were bred to fight dogs, they are fearless of other dogs and can be aggressive to other animals.

5. Because of their strength and size, Staffordshires can be difficult to handle. A pinch collar or Gentle Leader help with walking a Staff that pulls on the leash.

If you would like to write a profile of your favorite breed, send me an email at Lindsay@thatmutt.com. I’ll use pictures of your dog and link to your site. I’m happy to feature any breed! Click here to see all the breed profiles that have been done. Below is Ace hanging out with the Staffordshire we fostered for a short time last fall. He thought she was great! 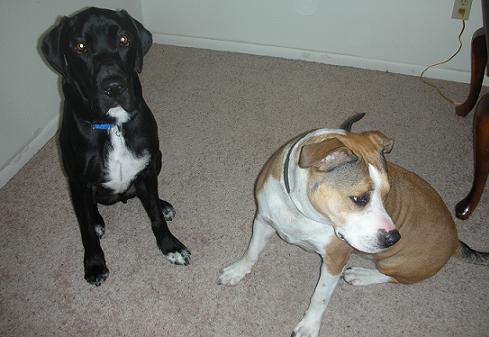 My name is Jessica Brady and I am the owner of a very intelligent, energetic and excitable American Staffordshire Terrier. I adopted her from The Humane Society in Manhattan, over 2 years ago and it has been a work-in-progress ever since. She was in a cage for most of her puppyhood. I believe that caused her to become anxious and somewhat unsocial. I have been able to teach her 12 tricks. She is a great listener and can be a very focused dog with the proper commands.

However, when she is around new people or new dogs she is quite nervous. I have spoken and worked with dog trainers in my neighborhood. All their tips are good ones but unfourtnetly haven't helped her settle in just yet. I've had her for over two years and would love to decrease her nervousness around new people and animals.

I have 2 staffs of my own and really trying to adopt 1 from the shelter. Luv these dogs. Wnt own n e thing but bully breeds. And I know the bad rep they have effect all of us who love these animals.

i'v had many dogs of different breeds since i was a kid but i have to say my American Staffordshire terrier is the best all round dog i'v had. affectionate, playful, intelligent, athletic, great with kids, loves being part of the family etc. etc. the list goes on. but i hate the way the majority of people look at him in fear when i'm out walking with him. the media have made such hype about this breed when it has nothing to do with the breed, it about the bad owners who mistreat their dog. my dog has only ever shown aggression one and that way only to protect my two year old son. my nighbour's dog a 'Kerry Blue' sometimes jump the backyard fence to play with my dog but one day my son was playing on his swing when the dog jump over, he seen my son and made a go for him, barking. my dog jumped up and sprinted towards the other dog and fought him off out of the yard. i was amazed, he saved my little boy, a hero in my eyes but you'll never see a story like that on the news, which is sad.

Keep spreading the word about what a wonderful dog your American Staffordshire terrier is!

Also, a Blue Pit is not a pit bull, it is also an American Staffordshire Terrier