Home » Teach your dog the command ‘find it’

You could have your dog find anything. Treats or a toy work well. The reason I taught Ace this game was to challenge him to search for an object rather than play fetch where my dog obsesses over a ball.

To teach Ace “find it,” I had him sit outside in a baseball field. There were pieces of litter scattered around, and I picked up one piece of paper the size of a gum wrapper. I held it in front of him and said “smell.” At this point he had no idea what that meant but he naturally smelled it. Then I told him to stay and walked about 30 feet out and randomly walked in zig-zags and discretely dropped the paper so he didn’t know when or where.

I walked back to Ace, released him and said, “Find it!” 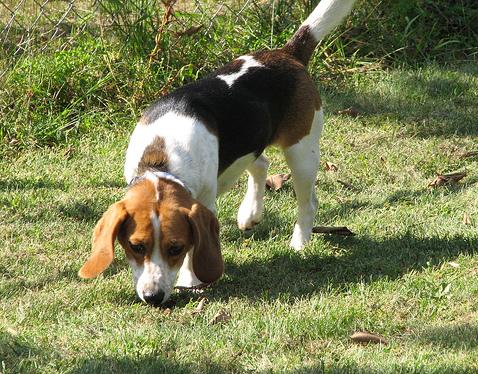 Since Ace is naturally a retriever, he immediately went to work searching for this piece of paper, first making big circles and then gradually targeting in on where he smelled the paper. He found it within a minute or two and brought it to me. At this point he was already becoming fixated on the paper, so we ended our game. Since then, I’ve played “find it” with Ace once or twice every day on our walks using a random piece of trash like a bottle or piece of plastic. Since it’s pretty easy for him, I’ve been making it more difficult by burying the object in the sand or hiding it on playground equipment or in a bush.

The game doesn’t have to be played outside. Try teaching your dog to find a treat by making it really easy at first. It’s OK if she sees where you put it until she gets the hang of it. Once she figures out the game, you can make it more challenging.

Have you played “find it” or a similar game with your dog?

Our Lucy knows 'Find The Ball' which she, not I taught Chels. Both now bring it back and I throw or hide it...We never really taught Lucy, she was just eager to please and each time we made it more challenging to keep her from getting bored

The technique you outlined is basically how you train drug sniffer dogs. I always joke I should train Chels to use at work...

We had fun teaching our golden this trick yesterday and today. He picked it up very quickly!

i love playing hide and seek with stranger but he won't go looking for something he doesn't care for, also depends on his level of attention

St. Lover, Ace does not know his toys by different names. I think it would be fun to teach him to find specific toys like you did with your dogs. All he knows is "ball." :)