Some people have made it clear that I am nuts for trying to stop a Labrador from being obsessed with a ball or that what I am doing is wrong. But I think it’s because people misunderstand my goals. My dog is part lab, and that means he will always, always love playing fetch and retrieving. Chasing, finding and bringing things back is driven into him, and I would never take that away. Retrieving is a quality many working dogs need in order to perform their jobs. I’ve even considered picking up pheasant hunting so my dog can have a job to do.

My main goal is to have a dog that can go to the dog park and enjoy himself. For the last year and a half, going to the dog park has been more for myself than Ace, because I enjoy seeing other dogs and people with their dogs. However, my own dog doesn’t even notice the dogs or people because he is so focused on finding a ball. I want him to be able to play normally with other dogs, and he can’t do that yet. The other dogs actually ignore Ace because they can tell something is off (unless they are humping him while he just stands there staring at a ball!). 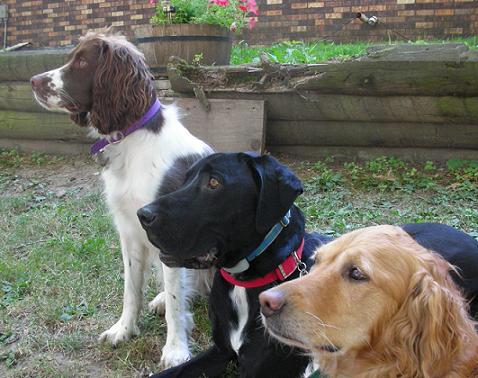 I hope that by logging my work with Ace, other people with ball-obsessed dogs (I know you’re out there!) or dogs with other fixations can learn that it is possible to change these types of behaviors.

For the last few days, Ace has been running next to me while I bike. This has been a good way to make sure he is getting enough exercise. But he needs more than just physical exercise. Yesterday, I biked to a park and then walked with Ace on my left and a ball in my right hand. Ace had to focus on heeling and looking straight ahead. Every time he turned his head to stare at the ball, I pulled up quickly on the leash. It only took five or six pops before he was heeling normally. I allowed him to glance at the ball every now and then with just his eyes, but no head turning. Since he was tired from running to the park it was easier for him not to obsess over the ball.

Next, I began swinging the ball, purposely trying to challenge him more. Then I put the ball on the ground and we walked in circles around the ball. He was not allowed to turn his head and stare at the ball. Finally, after success with everything, I sat on a bench and had Ace sit calmly on my left and the ball on my right. I made sure to be as relaxed as possible so he wouldn’t pick up on any tense energy from me. As soon as he was calm or looked away from the ball or made eye contact with me, I threw it. This usually made him tense again, so he had to remain sitting after I threw the ball until he relaxed again. Then I said “OK” and let him bring me the ball. Each repetition took about two minutes. I only did this two or three times so he would not escalate into that fixated state again. The goal is for Ace to learn that the ball is thrown only when he is relaxed.

After our short training session, I biked home. So Ace got a good physical and mental workout in about an hour. At home, I have still kept many of his toys out at all times. Every now and then he brings one to me, but I ignore him so for the most part he just carries something around or chews on it himself. This is totally fine with me, normal dog behavior.

agreed balance is just as important for dogs as it is for humans. its only natural that i love donuts, but i gotta expand my horizons, let ace know he inspires me : )

Thanks St. Lover, I trust your opinions because you own more labs than anyone I know, and I know you are so good with your dogs.

Great start Lindsay. Keep it up. Getting him to realize the game is over is going to take you the most work. We still work on this one too.

Mum & Dad have been hand feeding me on my walks to get me to pay attention to them and NOT run off after all the polite dogs that just get on with their walk.Then they get me doing al obedience stuff, plus retrieveing my wubber. I'm kinda the opposite to Ace but the theory of doing what the human wants when the human wants it is the same... All the best with your training & thanks for dropping by my bloggy! Love George