For someone who always tells people not to let their dogs rule the house, I have to admit something. My cats totally rule mine. Or at least they think they do.

When my gray tabby, Scout, wants something, he scratches my couch or slams my kitchen cupboards. Out of nowhere he casually lets his claws sink into my leg while I’m working. At night, the orange one, Beamer, takes over my bed, often waking me up by walking on me, “accidentally” jabbing me with a claw or shifting positions (a 16-pound cat doesn’t move too gracefully). When it’s morning, the cats are the first to let me know that my purpose in life is to get up and feed them.

If they were dogs, I’d have tons of solutions. Put them in kennels for some down time. Use food only as a reward. Ignore the bad behavior and reward the good. Put them on a leash. Make them sleep on the floor.

Although I do try these things with my cats, they don’t really work. So instead I manipulate my cats and find other ways to annoy them (Hey! It’s fair. They manipulate me, too!). I’ve trained my mutt Ace to run up and “give’m kisses” on command. I give them hugs just to piss them off after they’ve walked on counter tops. I wake them up during the day when they’re trying to sleep. I verbally harass them.

It’s just that I grew up with dog lovers. No one in my family really understands cats, and I’m the first to own one, at least in the last 25 years. Here’s an example that proves we are dog people: When I brought Scout home to my mom and dad’s house for the first time, they thought he was happy because he was “wagging” his tail. I had to inform them that no, actually he’s pissed off and that tail twitching means he’s about to swipe at your face.

OK, but I really do love my cats. I don’t always understand cats, but I love them. I owe it to them to understand them better, just like I tell so many dog owners they need to understand their dogs. It’s only fair. After all, we invite these animals to share our lives. We know so little about their needs, yet we expect them to meet ours. 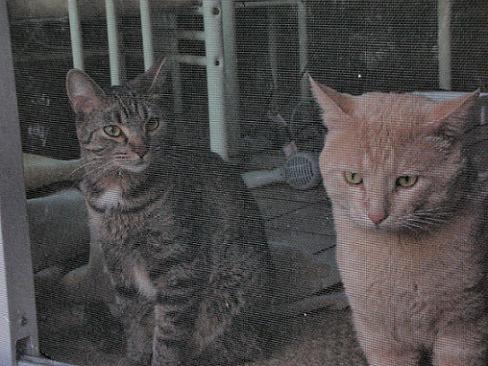 I'm sure Scout and Beamer will be happy to teach you everything you need to know. :) Lovely cats!

Thank you for visiting ...

I'm so glad to read this. I'm not a cat person but I have let my cat pretty much dominate the household. And I can do nothing to stop her.

jans last blog post..How to teach a puppy to be vicious in 1 minute

Its a great pleasure to watch cats moving lazily in your home. I love cats too, but may be, some extra passion for dogs. have a nice time.

Yeah, it's funny...I've been really lucky with my old cat - he sort of took my lead and is a really great companion animal. He became car and leash trained with little effort and has never been very demanding. It is only now that he is 16 does he complain at all to me about where is dinner is...it is actually pretty funny that he is a grouchy old man. My advice for dealing with cats - patience and understanding.