How to reinforce dog kennel training

Even older dogs will cry or bark all day when they are in their kennels in certain situations. The key to solving this problem is to put your dog in her kennel at random times so she gets used to staying there whenever you decide.

If you want your dog to nap in her kennel while guests visit, you have to practice that by kenneling her  when friends are over. If you don’t want her to bark at the doorbell while in her kennel, then practice that every day. If you don’t want her to cry when you leave, then kennel her while you’re home so she doesn’t associate the kennel with you leaving.

When I adopted Ace he was already kennel trained. That was part of the reason I adopted him. Actually, he had spent way too much time in his kennel, but at least he was used to being in one.

Once I adopted my “kennel-trained” dog, he cried and yipped for a good 20 or 30 minutes every time I put him in his new kennel. This was not ideal, considering I lived in an apartment. Lucky for me, the guy below me was very hard of hearing.

The reason for Ace’s crying was that he was in a new environment and a new kennel. He had been kennel trained in one house, but not mine. He was unsure of his new environment, new smells and new owner. He was probably worried I would leave him or that he’d miss out on something exciting.

It took Ace about two weeks to become accustomed to his new kennel in my apartment. His yipping ritual never lasted more than a half-hour, but for those first two weeks that’s what he did every time.

So I went back to the kennel-training basics:

– I ignored Ace when he barked or cried.

– I rewarded him with treats after being quiet in his kennel for even three seconds and slowly built on that time.

– I only let him out once he was quiet.

– When I came home, I didn’t rush to let him out right away. Instead I waited five minutes.

– Finally, I put him in his kennel at random times throughout the day, not just before I planned on leaving.

This last point is the most important for dogs that redevelop crying issues while in their kennels. I noticed this with Ace when I recently moved. I kenneled him for the first few nights in my new place and sure enough, he cried for the first time in months.

Instead of letting him out, yelling at him or comforting him, I let him cry. Within a half-hour the crying stopped. He did it the next night or two and that was it. Now Ace will sleep wherever I tell him, whether it’s his dog bed in my bedroom or his kennel in the laundry room. He doesn’t really care.

When we had my boyfriend’s mom over for Thanksgiving, Ace also decided to bark when I put him in his kennel. This is not normal behavior for him. He did it because he wanted to be a park of the pack, and he wanted to eat the really good food we were having. Instead of letting him out as a reward for throwing a tantrum, he stayed in there for quite awhile! It was a reminder for me to set more rules with my dog and go back to putting him in his kennel randomly for short periods when we have guests over.

Ace hardly ever goes in his kennel when we have people over, but sometimes it’s nice to have a short break from the animals. Ace has become very spoiled and hangs out with me every day while I work. That’s probably the biggest reason why he doesn’t always accept the kennel anymore.

Do you kennel train your dogs? Do they ever bark in their kennels?

If you recently got a puppy, you may be interested in my post on how to train a puppy. 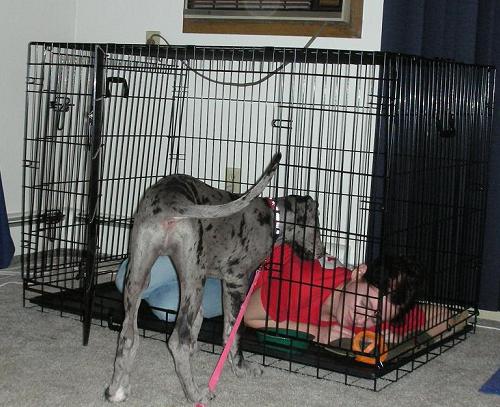 (Pictured is my friend’s dane, Piper, who has been kennel trained since she was a pup. I was teasing her so she actually wanted to be in the kennel with me.)

I usually just slide them through the bars, unless I'm giving them a Kong or something as I put the dog in the kennel.

How do you give treats to the dog when they are being quiet in the kennel? Do you open the door? Do you slide them through the "bars"?

With Ace, I started letting him sleep on the floor of my bedroom almost right away because he had no issues with that. He was always good.

As for staying out while I was gone, I waiting three months or so and then started leaving him out for short periods. 10 minutes here and there while I did things outside, then 20 minutes while I ran to the store, an hour, two hours, etc. Eventually he was able to stay out all day with no issues.

If your dog gets into trouble, then you know she's not ready for that length of time.

Our dog spent several month at an animal shelter, so she had no problem spending time in her kennel. We're having a hard time figuring out how long to let her out of it now.

When did you know it was the right time to let Ace out overnight? Or when you weren't home?

All the Shelties are cratetrained. One of the ways that we reinforce that the crate is a good place to be is by feeding them in the crates. It also helps with keeping feeding time a bit more organized with multiple dogs. They all sleep in their crates at night and during the day, you'll often find dogs just hanging out in the crates even though the doors are open. We love our crates!