Home » Teach your dog to stay without the ‘stay’ command

Note: This is a guest post by Ty Brown who offers dog training in Salt Lake City and beyond. I asked Ty to contribute to my blog after he read my post on teaching a dog to stay and said he does not use a stay command. A dog told to sit should automatically stay, he said. Good advice!

I used to be the training manager for one of the largest protection dog companies on earth. As a company we would import some of the finest dogs from Europe to the United States and would spend months training them to protect home and family, be obedient companions and be the best pets anyone could ever hope for.

The investment for dogs of this caliber was regularly $25,000 per dog and up, and nearly every client we worked with would attest to how valuable an investment it was to have an impeccably obedient canine companion that could also guard them. 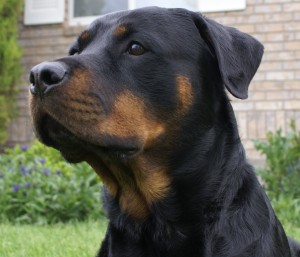 By the time we were done with these high-priced dogs, they would respond quickly and accurately to 20 or 30 commands.

Do you want to know the funny thing, though? After owning one of these dogs for months, most clients would report back that although the dog would obey any command quickly and happily, there were really only two or three commands used on a daily basis. Most clients would have need to tell their dog “come,” “down,” “come-on” and not much beyond that.

As people we are very verbal creatures. We talk and talk, and when we aren’t talking we turn on the radio or television to listen to and watch other people talk. It is very natural for us to also want to talk to our dogs. This is fine; there is no problem with this.

The problem, though, is in the commands we give our dogs. We give them too many! If you were to categorize and document the commands most people give their dogs on a daily basis you might find a list of 20 or more. What I’ve found is that most dogs are far better off with better selected and fewer commands. In fact, most people could easily stand to trim a list of 20 commands down to six or seven.

What do I mean by that? Most people I see tell their dogs to “sit” and then “stay.” Why bother saying “stay” once your dog has sat or lied down on command? You already told him to sit; you didn’t release your dog. If your dog does get up from a sitting position before you’ve asked him, you don’t have a “stay” problem, you’ve got a problem getting your dog to understand what “sit” means.

If you ask your child to clean his or her room and the child picks up one toy, do you call that good? Of course not. Your request isn’t complete until the child has finished picking up the room.

I teach my dogs that once I’ve asked them to sit, lie down, wait at the door, heel by my side, come when called, etc., to keep doing it until I’ve asked them to do something else or released them. I call it my “concept of permanence” and in doing so I only have to ask my dogs to lie down once, to heel once, to come once and so on.

It doesn’t stop there, though. I go into so many homes where the dog owner has a dozen words for the dog’s issues. When the dog jumps, the owner says “off,” “down” and “no jump.” When the puppy nips, the owner says “ouch,” “no bite” and “easy.” Why muddy the waters with so many commands? If your dog does something you don’t like, why not stick to a single word like “no” or “uh-uh”?

The bottom line is dogs are smart. If we need them to understand 20 commands, they can do it. Personally, though, I like to simplify things for them so we’re not giving needless commands. The more commands you give, the easier it is for those commands to become ignored.

Do you use a stay command? What do you think of weeding this command out of your training?

I can't speak for Ty, but I see everyone's points. I have always used the stay command and the wait command but I don't see much use for them any more. If I want him to "wait" at a door, I just say "sit" and then "Ok." Same goes with getting in the car.

Ace does still understand what sit and wait mean and these commands are still convenient every now and then. For example, when I tell him "back up," he likes to back up six feet or so and then move forward again. So yesterday I told him "back up" and then "stay." It's a good word to communicate to the dog to stop moving, similar to a hunter using "Woooah!" with his pointer that's on the move.

If my dog is already sitting and I want him to stay, I'll just repeat the word sit and tell him "good!"

If my dog is sitting and he gets up, I say, "No. Sit." And then I put him right back where he was.

Very interesting concept. I'm unsure though what to do if my dog does move once I've told him "Sit" or "Down". Do I rebuke him with "NO", give him the command again, or just ignore him? He has a vocabulary of eight words at the moment. It works well for us, in terms of obedience I need nothing more. When he's mastered these, I'll teach him some tricks which will, of course, expand his vocab to maybe 15 words.

I also keep the number of commands and words to a minimum, though I use both stay and wait. I'd rather have a dog who can sit, down, stay, come, leave it and understands "no" and performs all of these at a 90% level or better than a dog who "knows" lots of commands and words, yet responds in a less consistent fashion.

I understand the command permanence idea. However, I can see situations where the stay is useful. Often, my dogs are already sitting or lying down, even though I never gave them a command. In that case, I think it makes more sense and is less confusing to ask the dog to stay than to repeat the command that refers to a behavior the dog is already demonstrating.

I've seen so many dog owners who go into literally paragraphs to give instructions. Mine understand a lot of words but only obey five commands.

Two Pitties in the City

This was really interesting. We actually use a 'stay' and 'wait' command, and I realized I wasn't being consistent determining the difference between the two. And I definitely find myself using variations of words for the same command. We also do a lot with hand motions so I wonder if that could help counteract my overuse of words.