Yesterday we had a fun contest to guess the breed results of Ace’s mixed-breed dog DNA test.

Just to be fair, I didn’t check the results until last night.

We had some very good guesses!

Most people guessed Labrador. After all, Ace looks like a Lab and he retrieves any object (literally).

We were all wrong!

What were the dog DNA test results?

According to the Wisdom Panel Insights mixed-breed dog DNA test, Ace is:

According to the results, both of Ace’s parents were mixed breeds. Two of his grandparents (and four great-grandparents) were purebred Labs. The others were “mixed breeds.”

The report said that one or more of the following breeds “could have contributed” to Ace’s mixed-breed ancestry, in this order:

So there you have it.

My first reaction to the results was “What a scam!” followed by some good laughs.

On the other hand, I don’t know much about dog DNA, but I do know it’s very complicated.

For example, only six or seven of a dog’s genes (out of thousands) will determine his physical characteristics such as the length of his muzzle or the size of his head, according to an article from Stanford School of Medicine.

We humans tend to focus strictly on appearance when predicting dog breeds, and even my post from yesterday did just that. We simplify it too much.

As for Ace’s history, I know he was born near the small, farming town of Ada, Minn. His previous owner said he was from an “unplanned” litter from two mixed-breed farm dogs. It would make sense that Ace’s grandparents and great grandparents were also farm dogs – some mixed breeds and some purebred Labs.

German shepherds are popular dogs around here, especially on farms. Ace could very well have some shepherd in his ancestry. And as for the setter? Well, hunting is very important to this area along with hunting dogs. Perhaps at some point someone’s setter had some fun with a mixed-breed farm dog!

The dachshund doesn’t surprise me as Ace is very much a hound. And the basenji? That breed is known for its “yodeling” and Ace can sure do that!

I’m curious what the rest of you think of Ace’s test results. Regardless of the accuracy, it was a lot of fun!

So what do I call him now?

I think I’ll stick with Lab mix, as we’ve assumed all along.

And who was the lucky winner?

Well, pretty much everyone guessed Lab or hound.

Three people guessed two of the exact breeds – Lab and German shepherd. And one person guessed Lab and Irish setter, which I’m going to count as close enough to the Irish red and white setter.

So we had a four-way tie. I selected the name through Random.org and the winner is …

Congratulations, Leah! You win a $25 e-gift certificate to PetSmart!

Have you ever done a DNA test on your dog? What did you think of the results? 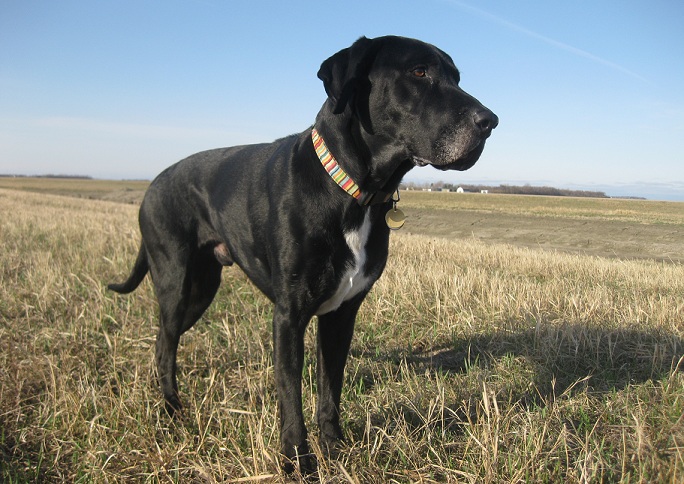 Note: We did not receive a free mixed-breed DNA test from any company for any reason. However, Ace did receive the test as a Christmas gift. Thank you, Tawna! Also, PetSmart did not donate the gift certificate.

Hmmm...his flash (white is rather big , actually, compared to purebred labs and breed standard for same and that.. I wonder if that's the Irish setter's contribution.

Give him a pat for me?

He's so adorable, regardless of what he is.

I just did a DNA test on my newly adopted dog Stanley, this past December. The shelter said he was a chihuahua mix. He looks like a little German Shepard. I have a pure chihuahua and they do look similar. Well.. The results were 100% chihuahua! Whether it's true or not, it was fun and we love him no matter what breed he is.