Due to hysteria, some people are afraid to feed their dogs raw pork or any raw meat at all.

My dog Remy eats a diet of mostly raw chicken, but to add variety I also feed him raw pork, turkey and beef.

Pork is less expensive than many other meats so it’s a nice option to keep in his rotation of raw dog food recipes.

The following are some common questions dog owners ask about raw pork.

Does raw pork carry a parasite that will kill dogs?

No. Not if you’re feeding your dog commercial raw pork from a grocery store or reputable raw dog food company.

I would personally avoid feeding a dog wild pork/boar, however.

This is because wild boars may carry a parasite called Trichinella spiralisis which was once more common in pork. The parasite causes the disease trichinosis.

“Many people associate pork with trichinosis,” wrote Dr. Laura Duclos for the raw dog food company Nature’s Variety, which uses raw pork in some of its products.

Trichinella in commercial pork products is virtually zero, she wrote. Human cases of trichinosis are rare, with less than 12 cases per year. Most of these cases occurred when people ate undercooked wild animals such as boar, bear or mountain lion.

For this reason, I suggest you avoid feeding your dog any wild boar unless it is cooked.

The reason pork obtained a bad reputation was because in the early 20th century, pigs in the United States were fed garbage containing scraps of pork from slaughter houses, wrote Duclos.

This garbage also attracted rats, which the pigs also ate, wrote Duclos. Rats were the primary animals that spread infections to the pigs. Since then, the government has banned pig farms from feeding raw meat and garbage to pigs.

Just to be on the safe side, I always freeze raw pork for two weeks before feeding it to my dog as part of his raw dog food diet.

Freezing the meat will kill any trichinella parasites, according to Dr. Karen Becker on the web site HealthyPets.Mercola.com. She says to freeze all pork for three weeks, but I typically only freeze it for two.

There is basically no chance of U.S. supermarket pork containing parasites. Plus, most pork is frozen before it’s sold, anyway. I’m just a worrier, so I freeze it again to be on the safe side.

Raw feeding is a work in progress and we all do the best we can.

Will my dog get sick from raw pork?

Most likely not. Dogs can eat raw pork.

A dog could get sick from eating raw meat of any kind, but the chances are low. A dog could also get sick from eating dry dog food. As long as your dog is healthy and the raw meat is fresh and introduced slowly, he should be fine. There are small risks to feeding a raw food diet for dogs, but I believe the benefits outweigh those risks for most dogs.

I can’t believe how many searches my site gets for questions like “Can dogs eat raw meat?” Are we forgetting that dogs and cats are designed for eating meat?

If you would like more info on feeding your dog raw, I’ve written an ebook to help. The cost is $9 and it goes over everything you need to know about raw feeding. 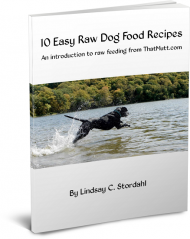 Can dogs have raw pork bones?

As for raw pork bones, it’s all about knowing your particular dog.

Yes, it is possible for a dog to attempt swallowing a piece of bone that is too large, and this could be a choking hazard. Because of this, I do not feed my dog raw pork bones. Your dog may be different, which is why it’s important to supervise your dog whenever he is eating bones of any kind.

They could. Again, it’s about knowing your particular dog.

Why can’t I just feed my dog cooked pork?

You certainly can, but never feed cooked bones.

Although raw meat is generally more nutritious for dogs than cooked meat, cooking the food is the next best thing.

How about you? Do you feed your dog pork?

Let us know in the comments below!

Will dogs get sick from raw meat?

Lindsay Stordahl is the founder of That Mutt. She writes about dog training, dog exercise and feeding a healthy raw diet.

Animals on their own cannot and do not cook what they find to eat, right?.....Duh oeople... raw is better for then.Cats too..the ultimate survivors.

I switched my girls to raw meat 6 months ago. Lab's, 4&8. I am amazed at their change in health. Lost weight, nice coats, more energy, minimal waste, no digestion issues. I buy a blend from a local butcher that has beef, chicken, pickerel and hard boiled eggs in it. Once a week I add raw pork trimmings I get from a caterer friend. No Issues. I always freeze the pork for a month to be safe. If you read online about raw pork its a real back and forth discussion but I take the stance that most of the beware stems from ancient history and was valid....a time ago. Just going by the change in overall health since switching from the premium grain free blah blah blah food I was feeding them....raw pork is healthier than anything in a bag on a shelf

It’s funny how people thinks it’s bad for dogs to eat raw meat (which is what they eat for thousands of years in the wild) their saliva is antiseptic that’s why the wild canines can eat rotten remains or dead animals whit no problem. Domestic gos hasn’t change that. They lick their wounds to keep them clean to be healed. The best you can do is feed your dog with raw food, go, buy meat, and give it to them, simple like that. Just research to do a balanced diet.

A concern about feeding cooked meats is the fat. Cooked fat can cause pancreatitis in dogs. So as yummy as bacon sounds, it is a poor choice for dogs. If we compare our dogs to ancestral behavior and food sources, the dogs of long ago ate raw lean meats from prey that they hunted. Commercially raised livestock do not roam the great plains or forage for food. They are raised in enclosures and some don't even see the light of day, so their muscles are not lean and they have more fat. I feed my husky/lab/rottie girl a raw diet, and supplement her calcium intake by feeding her chicken necks. She's thriving. I am a bit leery about bigger rib bones because she's able to eat them in possibly larger chunks and I'm worried about being a choking hazard or an intestinal obstruction. I think I'll stick with the smaller chicken necks. She does love those. Thanks for all your insight and stories.