Unlocking the Genius of the Dog Who Knows a Thousand Words

Note: I received a free copy of “Chaser: Unlocking the Genius of the Dog Who Knows a Thousand Words” in exchange for a review on this blog. I’ve included Amazon affiliate links. The book is written by John W. Pilley with Hilary Hinzmann. 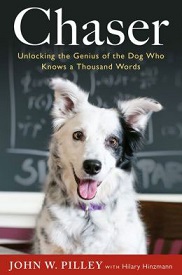 Chaser is a 9-year-old border collie, and her owner and trainer John Pilley says his dog knows the names of more than 1,000 objects. That’s apparently more than any other animal of any species other than humans. It’s a very impressive achievement! How many words does your dog know?

Pilley, who is a retired psychology professor, goes into a lot of details on how he trained his dog. He started working with Chaser in 2004 when he got her as a puppy, and he has published some of his findings in the journal Behavioral Processes. I really admire his patience and willingness to share his teaching methods with us. If every dog were trained by Pilley, I’m sure we’d have a few others with 1,000-word vocabularies.

Not only does Chaser seem to understand the proper noun names of specific toys, but she can also understand that certain words refer to whole categories of things.

Random pair by random pair, I asked Chaser to take, nose and paw the three toys in different combinations. She made one error in trials of fourteen random combinations, pawing Mallard when she should have pawed Wise Owl. In other informal tests over the next few months, always with objects that I hadn’t previously asked her to take, paw, or nose, her error rate quickly dropped from one or two mistakes per test to zero. After that she never made a single error.

How do you describe that other than amazing?

Since reading this book, I’ve been inspired to help my own dog expand his vocabulary. Could he learn names for all of his toys too? I don’t see why not. Chaser will really get you thinking about your own dog’s mind, and that’s only going to strengthen the relationships people have with their dogs all over the world.

I do have a bit of criticism for the writing style of the book. I was hoping for a more scientific look into Chaser’s story, but certain sections of the book contained too much fluff and back story for my preference. For example, sometimes the dialogue between Pilley and his wife distracted from the flow of the story.

I did a quick search on Amazon for reviews of Chaser, and I’m definitely in the minority by giving it any criticism. It’s getting mostly five stars. People are responding well to the book’s positive, inspiring energy. And of course border collie fans are especially interested.

Pilley has accomplished something truly impressive with his dog. He’s shown the world what dogs are truly capable of. Who knows what we’ll learn about them next.

Get your copy of Chaser here.

So how many words does your dog know?