I have a soft spot for senior dogs, especially black Labs. This story is an example of a good dog just doing his job to protect his best friend.

A blind man and his guide dog were struck by a subway train in Manhattan Tuesday, according to The Associated Press. They had both fallen onto the tracks after the man lost consciousness.

Cecil Williams, 61, told The Associated Press that his 10-year-old black Lab Orlando is trained to protect him from going over the edge. However, once Williams lost consciousness, they both fell onto the tracks.

Witnesses said Orlando was barking and trying to hold Williams up, according to the AP. But they both fell once Williams fainted. Orlando then huddled beside his companion on the tracks. Both were struck by the subway, but the motorman had been able to slow the cars so neither were badly hurt. 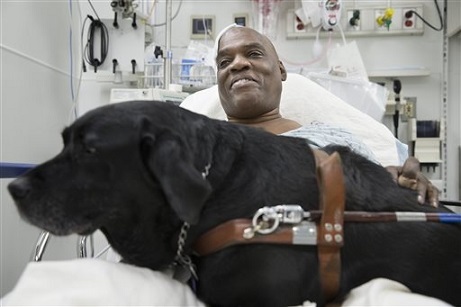 More on the story

If you have a “Dogs in the News” story that should be featured on That Mutt, send it to [email protected]