This is a guest post by Thom Milson on behalf of the Royal Dutch Guide Dog Foundation.

As a dog owner I know how a dog can completely change your life. Living with a dog is so incredibly different from life without a dog: it’s exciting, rewarding and full of love.

Because I’m a dog owner, when I saw the new advert by The Royal Dutch Guide Dog Foundation (KNGF) I couldn’t help but be moved (video below).

The Royal Dutch Guide Dog Foundation has been training dogs for blind people for over 75 years, and it’s helping provide sufferers of post-traumatic stress disorder with life-changing companions.

PTSD has been known to lead to suicides in veterans who become incapable of returning to a normal civilian life due to their experiences in combat.

The British Ministry of Defence has found that the amount of veterans suffering from PTSD has doubled over the last three years alone. As veterans are not tracked once they have left the army, many more soldiers returning to civilian life may be suffering from PTSD than has been officially recognised.

Veterans suffering from PTSD can be helped so much by dogs because it’s impossible to care for an animal without becoming emotionally open.

Emotional numbness is something many PTSD sufferers have to deal with, and the companionship a dog provides – as well as the appraisal and care an owner must give – helps sufferers open up in ways they may have been unable to do so since returning from combat.

I read an article on the Smithsonian which said: Researchers are accumulating evidence that bonding with dogs has biological effects, such as elevated levels of the hormone oxytocin.

“Oxytocin improves trust, the ability to interpret facial expressions, the overcoming of paranoia and other pro-social effects – the opposite of PTSD symptoms,” said Meg Daley Olmert of Baltimore. Olmert works for a program called Warrior Canine Connection.

As dog owners we can often take these emotional benefits for granted, but we will always admit that because of these benefits owning a dog is undoubtedly wonderful. It’s great to see people using the companionship of dogs to help those who need it most.

Learn more about the Royal Dutch Guide Dog Foundation and its work here. 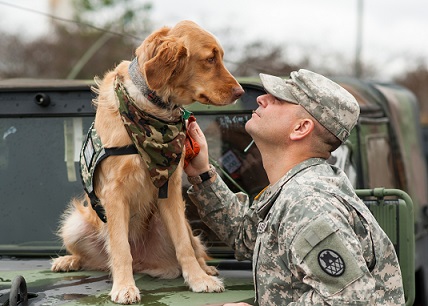