Time to talk about humping!

A dog’s humping behavior can be an awkward discussion topic.

However, “mounting” is a normal behavior for dogs just like rolling in poop, growling and peeing on things are all normal dog behaviors.

But should we allow our dogs to hump other dogs?

I’d love to hear what you think.

Let’s use the dog park scenario for this post because that’s where we often see dogs just being dogs, right? It’s like a free-for-all at times.

There are certain behaviors I try to limit from my dog at the dog park:

It’s just that all these behaviors are related to energy, and too much energy in the wrong situation can lead to a fight, especially when the dogs are unfamiliar with one another.

For example, if my dog is allowed to obsessively bark at another dog (usually over a toy), pretty soon three or four other dogs will come over to investigate. Their tails and heads will be up. Sometimes there is tension. Their arousal levels are high.

Dogs are always responding to one another’s energy, and it’s our job to keep that energy at a certain level. Maintenance control.

So if my dog is beginning to bark excessively, I intervene before it reaches a certain point. We each have to make our own decisions on how much energy to tolerate, depending on the situation.

So what about humping?

When my dog gets humped

If I see a dog getting extra “friendly” with my dog at the park or beach, I try to intervene before that dog has a chance to throw his paws over my dog’s back. Sometimes this involves calling Ace to me. Sometimes I step between the two dogs or give a firm “hey!”

If I do not intervene, and my dog gets humped, I know he will eventually respond with a growl. If the other dog doesn’t get the message, Ace will turn around and let out a ferocious snarl. He means no harm. He’s basically saying, “Get the F— off me!”

It’s my job to intervene before it reaches that point.

Yes, dogs will usually work it out on their own just fine, but I would rather avoid those types of confrontations.

When my dog is the “humper” 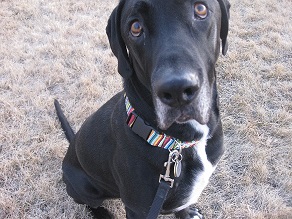 My dog Ace is a mellow, laid-back guy with low to medium energy, so it’s extremely rare for him to hump another dog. (Update: Ace has passed away.) When he does, it’s always because that dog is insecure, nervous or scared. And the dog is usually very young. (Yeah, he goes for the under-aged dogs.)

I don’t know what my dog is thinking, but I can only assume he’s simply reacting to the other dog’s energy.

You may have noticed how all the dogs tend to crowd around a very nervous dog at the dog park. This often leads to a lot of vocalizations from the scared dog, especially if the dog is on a leash and can’t get away. Then of course, some of the other dogs begin barking and the energy continues to build from there.

I try to keep my dog out of these situations.

If I notice Ace is starting to get a little too “frisky,” I call him away.

Actually, if there is a lot of energy building for any reason, we calmly move away. I try to teach my dog that we don’t associate with that kind of energy at the park or the beach. We certainly won’t be the ones to start it.

But that’s just my opinion. Plus, a lot depends on the situation and how well the dogs know each other. What’s considered rude between two strange dogs may only be a playful gesture between good friends. Not all that different than humans, really.

What do you think? Do you allow your dog to hump other dogs?

Hey i know this is an older article but. My dog Kylo has picked up the habit of humping. He’s a 10 month old shepherd and he’s not neutered. I’m not on board with the idea of getting him neutered due to him being a large breed. But everytime I take him to the dog park he wants to fixate on one dog... and hump. I have no clue how to get him to stop. When he is within reach I tell him “NO” and move him. When he’s not in reach I have to go get him off the other dog. The Other dogs give him a warning and they nip and growl at him but, Kylo dosent seem to understand and is very persistent in humping the dog he’s fixated on. It’s very frustrating and embarrassing sometimes. I’m thinking I might have to hire another trainer. The 1st one didn’t even help address the issue. I need help. Any advice would be very appreciated.

It would be easiest to distract him before he starts humping, when possible. Just tell him "no" or get him focused on something else. Easier said than done, I know. You may need to avoid the dog park if it's a problem.

Maybe if you have some tolerant friends' dogs who he gets along with, you could plan on a "play date" and use treats to distract him from humping. Use a firm "no" if he does do it but try to catch him before he starts, like when he starts fixating and staring at the dog. Use treats to reward him for paying attention to you or sitting on command or something simple. If needed, you could use a squirt bottle of water to correct him from humping or a product called the Pet Corrector that blasts compressed air.

Once he seems to be doing better around familiar dogs, maybe try taking him to the dog park during quieter times and after he's had a long walk or played fetch or had other exercise. The calmer he is, the less likely he will be to hump other dogs and more likely to listen to you.

Thank you! I really needed this post today. My dog Cocoa can be so good and quiet that people do not know she is there. This leads to problems because when she makes herself known she is present. I call her my back alley dog because that is where most people probably don't want to meet her. Children do not always know she is around and accidentally sneak up on her. Than she is there. Like Remy, Cocoa has passed the AKC CGC, and visits dog freindly stores. But she is also the dog that is a fifty pound terrier mix.

I have a 13 lb terrier mix. She was a rescue, we got her at 2 years old, a stray . She may be part jack russell. She loves to go to the dog park, and fortunately they segregate large and small dogs. She sniffs other little dogs at both ends, and is definitely alpha female with the group, quite often the same dogs. She can stir up rough behavior. The other day it looked like pooch football. Other owners Don't mind, but it worries me. We only do fetch at home, no tug or fighting. She will come when called, but not when she's into it with "the gang". She's like a two year old who won't leave the sandbox. Also,sometimes she barks at the big dogs. This could have come fro her days a s a stray in the city. She knows commands, tricks, and is mostly loveable at home. Any suggestions?, Ps. She is fixed, but does not act it out with other dogs. Do see her rubbing the area and obviously..... She was fixed late, probably after sexual maturity.

These "antisocial" behaviors (which for dogs are perfectly social, should be discouraged because of their owners, not for the sake of the dogs. I have noticed that in the dogosphere, that there is a surplus of dog-experts out there, who actually are discussing four-legged furry human children, and not the canis lupus familiaris who eat poo, lick pee, and blight gorgeous landscapes, humping each other till the cows come home. What I am saying, is that yeah, reasonable people know full well, that this is just dogs being dogs. But not everybody is reasonable. Some people might think that Rover's humping of Fido is an act of aggression, and the owner of the other dog might get aggressive with YOU.

All the while screaming at you, at the top of his or her lungs, that YOUR DOG is aggressive.

Seriously though, in many situations, human responses to a perceived slight can turn into combat. Dog confrontations, well ... meh. I don't let my dogs "express themselves" freely because I don't want to deal with the owner attached to the other dogs.

Tessi is a humper, though she rarely does it now. When she does, I'm startled because I forget she has that tendency. When I first had her, she did it a lot. I didn't know much about dogs and remember thinking the first time I saw her do it that I was sure I got a female - I thought only males behaved in such a way. lol. My vet said that they are showing dominance, so I've always discouraged it. I've learned so much more about our dogs over our years together and that they are capable of almost anything. You should have seen the look on my face when I saw the two neighbour male dogs "going at it."

Oh I remember the good old days when I didn't know female dogs would mark. I soon learned otherwise.