My dog Ace was super lazy, and I loved that about him.

Ace was perfectly fine with a 20-minute walk each day, and he didn’t seem to mind if we missed a day or two. He was a nice balance for me, because I tend to get obsessive about exercise.

Of course, a lot of dogs require much, much more exercise than Ace.

My pup Remy seems to have explosive energy.

So, I reached out to some owners of “supercharged” dogs and asked how they manage all that energy.

How to tire out a hyper dog 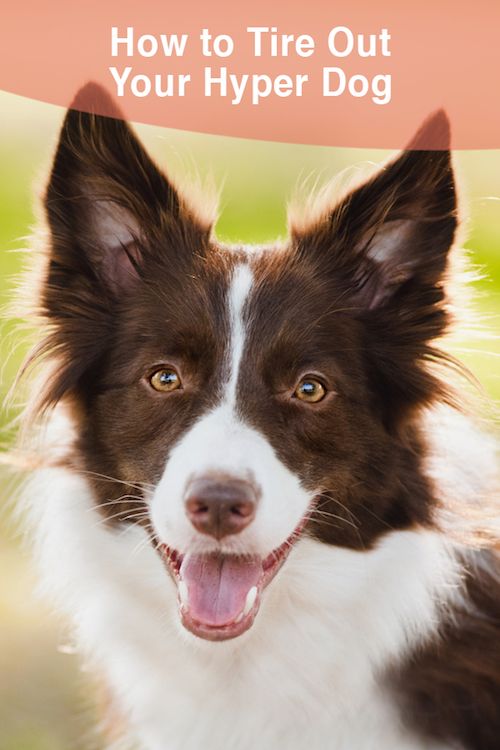 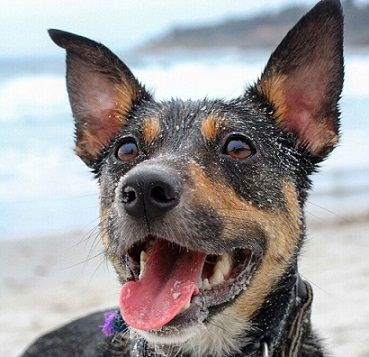 Jen deHaan says she has yet to completely wear out her dog Mort.

“I did manage to tire him a little after 24 hours of flyball competition in a single weekend,” she said. “Almost.”

If left to his own devices Mort would probably run and play until he collapsed, according to deHaan.

“I’ve taken him out to a regional park with a lake and hills to run up and down, and he swam and ran full speed for over three hours,” she said.

“He rested for the 45-minute car ride home, and as soon as we got inside he found a ball and was ready to sprint around the house again.”

Read more about Mort and deHaan at DOGthusiast.

“There is no way on this earth that I could tire him out by leash walking alone,” said Linda Liebrand about her dog Alfie.

She said she thinks of him as a small nuclear plant or a self-charging battery.

“I take him for a long walk, using up his batteries. He sleeps for an hour or two, recharging, and when he wakes up he’d happily do the walk all over again!” 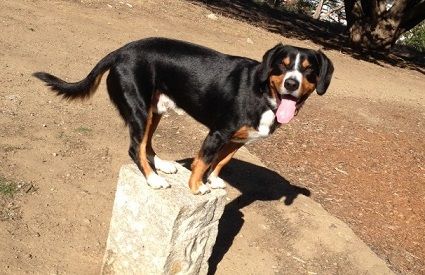 She said she tries not to miss walks with Alfie because he would likely turn into a really stressed and poorly mannered dog.

Bonnie Joy Dewkett and her husband are the owners of two dogs, Roxy and Summit (pictured).

“We are not either dog’s first family, as they were both given up previously by people who couldn’t take the activity level,” she said. 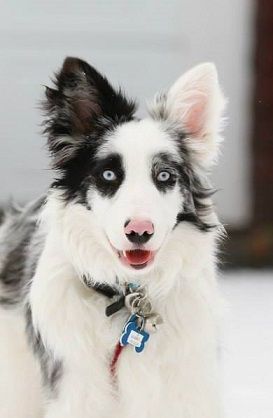 She takes her dogs walking, running or hiking on average about 15 miles per week.

We highly recommend running with a hands-free leash and a sport dog harness from Mighty Paw. This system allows your dog to pull you and gives him a great workout!

Natalie Maniscalco adopted her dog Mia from the Bidewee animal shelter in Manhattan.

Her 5-year-old dog has slowed down a bit these days, but she used to exercise Mia for at least an hour a day. This would include running, walking and throwing a ball.

Another trick she uses to tire out Mia is to play tug of war. She said Mia likes to pull, shake and twist at a rope or other toy. 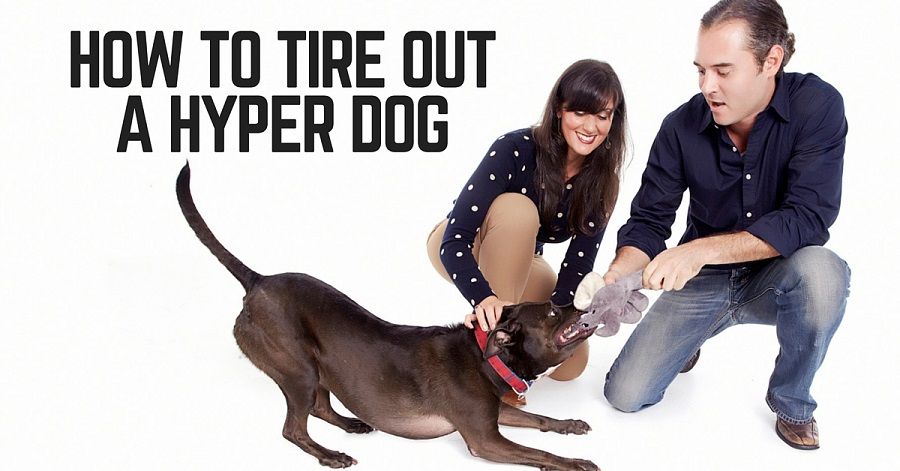 How to tire out a dog mentally

On her walks with Alfie, Liebrand (pictured right) tries to vary the locations as much as she can, as that adds to her dog’s mental stimulation.

She also tries to build in a variety of fun games and training. For example, she:

She and Alfie also participate in nose work classes, which she said is a brilliant activity for high-energy dogs. 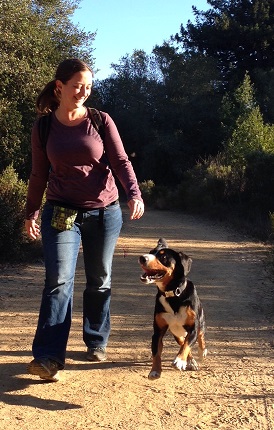 Mort and deHaan are also involved in different activities such as flyball and disc dog, and deHaan suggests other dog owners look into dog sports as well.

“These activities help you develop a strong bond with your energetic dog and keeps him content during down-time,” she said.

Finding an off switch – teaching the dog when play is over

Liebrand and deHaan stressed that if you have a high-energy dog, you must teach him a command to signal play is over, for example “finished.”

“It really is the best command in the world as it teaches your dog when play time is over,” Liebrand said.

She taught Alfie the command by saying “finished” when she wanted playtime to end. Then she would give him a treat and walk away.

“The dog will quickly learn that playtime is over when you say so,” she said.

I actually use a similar command with Ace – “that’s enough!” – to signal when fetch is over.

See my post: How to teach your dog when play is over

More tips for people who recently adopted a high-energy dog 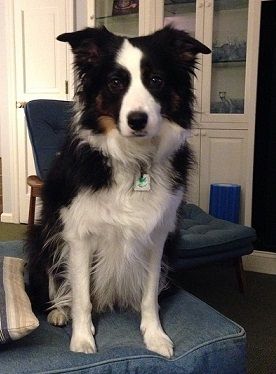 If you’ve recently adopted a hyper dog, the best thing to do is take the time to tire him out, according to Dewkett. It will make your life so much easier!

“If you can work out with them first thing in the morning, even better,” she said.

And for anyone thinking of getting a high-energy breed, Liebrand said if the dog books say the breed may need an hour of daily exercise, remember that a puppy or young dog of that breed will have even more energy.

Puzzle toys to tire out a dog mentally

Dewkett recommends puzzle-type toys throughout the day, which is what she gives her border collies when she’s in meetings and can’t pay attention to her dogs as much as she’d like.

For deHaan, high-energy dogs are incredibly fun and worth the extra work in training and activity, but they’re not for everyone.

“Make sure that if you choose to adopt a dog like this you’re ready for a bit of an extra time commitment when it comes to keeping him or her busy and content,” she said.

Do you have a high-energy dog? How do you tire out your dog? 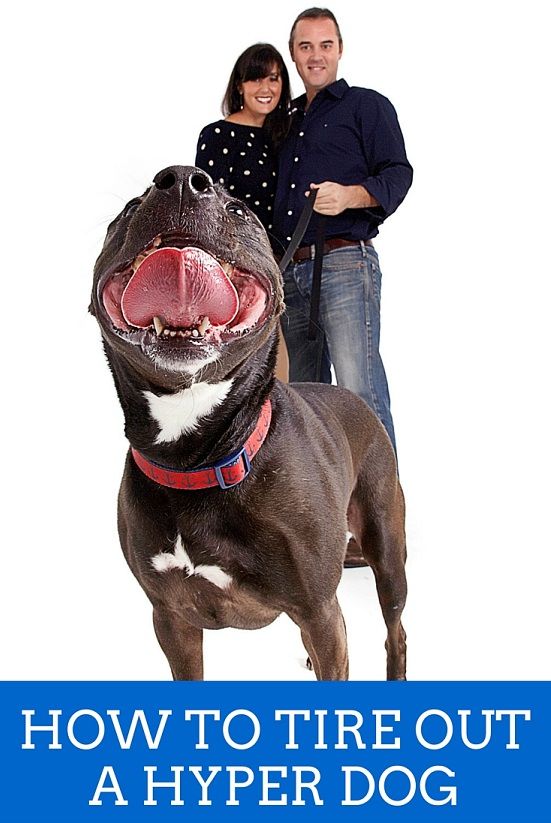 86 thoughts on “How to Tire Out Your High-Energy, Hyper Dog”