A dog was stabbed Friday in an off-leash dog park in Lakewood, Colo., according to ABC’s 7News in Denver.

A boxer mix and another dog got into an entanglement when one dog’s tooth got caught in the other dog’s collar, according to 7News. This caused one of the dogs to panic.

Several people were trying to separate the dogs when one of the dogs was stabbed. Police are working to identify a suspect, (Det. Ryan) McCone (with the Lakewood Police Department) said.

“Around 3pm we received a phone call that a dog had been stabbed and was bleeding so profusely that they were afraid to transport him,” according to a post Fox Hollow’s Facebook page. “Dr. Tony took two of our Technicians and rushed up there to bring him back for emergency surgery.”

The stab wound was five inches deep, the animal hospital stated, but Tyni is now in stable condition.

Tyni is expected to survive, according to 7News. However, no one saw where the stranger with the knife ran off to, and Tyni’s owner is offering a $1,000 reward for information leading to an arrest. 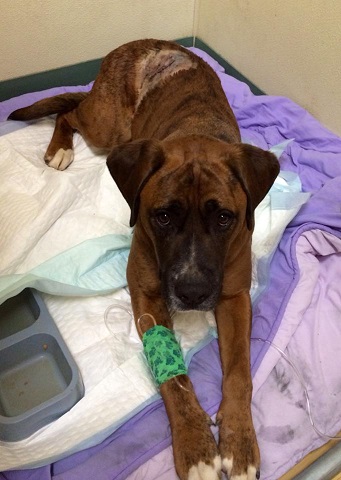 I'm so shocked and saddened by this - it's just unthinkable that someone was waiting for an opportunity to something so terrible. I'm in Denver and rarely go to dog parks but happened to be at one with Boca on the same day this happened (on the other side of town). I'm thankful that the dog is recovering and they have already raised close to $3,000 for its medical bills.

Thank goodness he's OK! Yes, I knew you lived in Colorado but wasn't sure what area. I'm sure that's an odd feeling to know this happened while you were at a nearby dog park the same day. Ugh.

What?! I can't believe no one saw who did it, but I guess adrenalin does crazy things with your brain. How amazing that the vet was willing to come out and save the dog.

It sounds like no one saw the knife coming and then the guy just walked away before anyone could do anything. So strange.