Do you think your dog would protect you?

I like to think my Lab mix Ace would protect me, but I have my doubts.

Police said a girl walking her dog before school Thursday morning was nearly abducted by a man, according to WSB-TV in Atlanta.

Her 4-year-old rat terrier mix apparently saved her by biting the man’s ankle, which caused him to let go of the girl’s wrist.

This happened in Cobb County, Ga., near Atlanta. 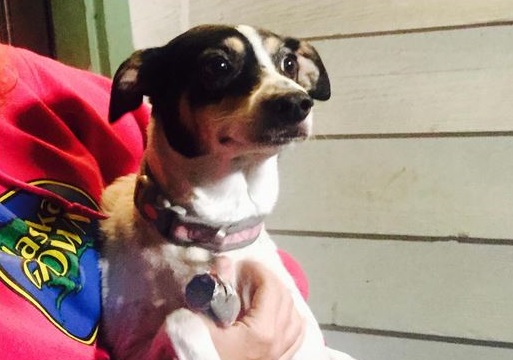 “My hero. My daughter’s hero,” Jones said holding her dog.

The girl told Cobb County police she was walking her sisters to school on Darnell Road near Barber Road in Marietta around 7 a.m. Thursday when a man drove past her and stopped.

“She kept walking and when he had jumped out of the truck he tried to grab her and my dog goes crazy,” Jones told Channel 2’s Carl Willis

The dog bit the suspect on the ankle, just enough to run him off.

Police are still looking for the suspect.

Do you think your dog would do the same?

Aeon would, D.O.G. might and Missy, I don't think she has a mean bone in her body. Though now I've said it, she will prove me wrong!

I'm glad the dog did do that. And we won't know if our animals will do that until the horrible thing happens to us. Pets save lives every day, even if its a siezure, diebetic and PTSD companion.

The girl and dog are blessed to have each other!

Ha, Chip would be too busy licking the attacker to notice. Phoebe on the other hand would I think but like most people I don't think she would actually bite but would definitely bark.

Its nice to know that you do have a bit of protection should you need it!

I really doubt Norman would ever be protective. But I could see Kaya coming to my rescue. Never a bite but a growl or bark. I had to call AAA the other night. It was pitch black out & she growled a lot when the guy came to the window. I think Zoey would too. She was at a groomer once (her first time at that place) & a guy came in who yelled at the groomer for not having time to take his dog that day. Zoey started barking a ton at the guy when he wouldn't calm down. It's the only time she's ever barked at someone (apart from the doorbell).

I've heard of people training dogs to bark on command and using it on walks to deter certain strangers.

This is a good reminder for me to not count on my dog to deter people from attacking me. I try not to walk at night; I know I'm not in the best neighborhood, but I sometimes delude myself into thinking no one would mess with me if I have my little terrier, mostly because he's noisy and could attract attention. I'm glad the girl is ok. I kinda think most dogs would have been useless in that situation, to be honest. I can picture most dogs just kind of spinning around in confusion and barking a few times. I don't think my dog would bite an attacker unless he was being directly threatened, and I hope I never get to be proven wrong or right!

I truly don't believe Ace would bite anyone either. I think he would bark though.