A 5-month-old pig has joined a dog agility class at the Family Dog Training Center near Seattle, according to ABC 7 News Los Angeles.

The pig, named Amy, is a quick learner, according to her owner Lori Stock. The pig easily passed through the “puppy manners class” and is now working on agility and obedience.

Pigs aren’t animals that fetch items like bones and sticks, but Stock says she has been able to entice her pet pig with food.

“She is quite eager to participate in class and do the homework outside of class,” Stork said.

Workers at the training facility say Amy keeps eating her way through all the training sessions and does better than the dogs in some ways.

What do you think of this pig?

I find her adorable and hilarious.

Image and video from ABC 7 News 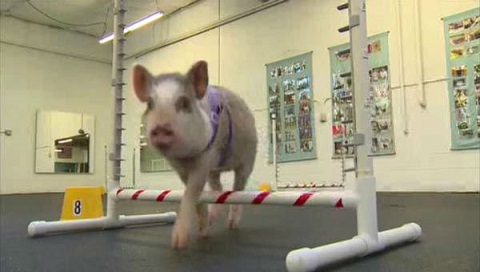 I agree - adorable and lovable!

BOL! I think it's hilarious as well! Way to go, little pig, teaching those K9 classmates all about finding the right kind of motivation that will make you excel at obedience & agility classes.

Oh that's too funny! Also that's so . . . Seattle. People in the pacific Northwest were so quirky and accepting and fun. I can see them going along with something like that.