Home » Man reunited with bulldog missing for more than 2 years

My pets are not microchipped, but this story is a reminder for me to reconsider.

Thanks to a microchip, a man is rejoicing after his English bulldog was returned, according to ABC7 News in New York. The dog disappeared back in 2012.

Robert Vitiello said his dog Bella was stolen more than two years ago when she was just 6 months old, but now she is back at home in Hempstead, N.Y.

“It was like she never forgot us,” he said. “As soon as she saw me, it was the best feeling. She came out all bull-doggish, and she started licking me and kissing me with her big tongue of hers.”

Someone found Bella wandering around the Lindenhurst area Friday night and brought her to the Veterinary Medical Center of Long Island. They scanned for a microchip, and that led them to Vitiello.

“When I got that phone call, and they said this is the vet, they said we found your dog Bella,” he said. “I lost my breath. I was like what, who? I’m like, I’m Bella’s father.” 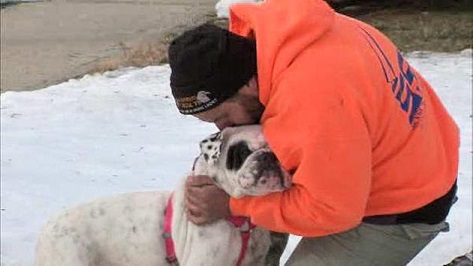 Veterinary officials told ABC7 it looks like someone had been caring for Bella all this time. She seems well socialized and has a “good body condition.”

Meanwhile, Vitiello is still searching for his other dog, Cesear, who he believes was taken by the the same person who took Bella, according to ABC7.

Are your pets microchipped?

Cookie is microchipped - made perfect sense given her adventurous nature and our circumstances. I have to say, though, that if it took two years or longer to find her, I'd consider that microchip fail rather than success. I sure hope she never gets lost and if she ever did, that she'd be found in days instead of years.

My pets are absolutely microchipped!

What a great story. I love that they were reunited. Baxter has two microchips. The adoption agency told us he wasn't chipped, so on our day 1 vet visit I asked him to be chipped. Turns out, he already had one, as the vet discovered when he read the newly installed chip to make sure it was working. Lesson learned for both me and the vet! I have to admit that it gives me some comfort knowing that the chips might help him find his way home if he's every lost.