Almost two months after he went missing, a Wilmington (Ohio) K-9 officer has been found, according to WCPO News in Cincinatti.

I love this breed, and I’m impressed the dog survived on his own for two winter months.

Pam Jones and her husband spotted the dog and called 911.

Jones is one of the estimated 20,000 people who went out looking for Karson over the past 61 days so she felt pretty sure it was Karson. But she wasn’t certain at first because of the way his ears looked.

“We spotted an animal to our right but his ears kind of were down. But once that confirmation came that yes, that’s him, then I think all bets were off,” she said. “We were getting that dog.”

Jones, a professional photographer, pulled out her camera and documented the reunion between Popp and Karson. 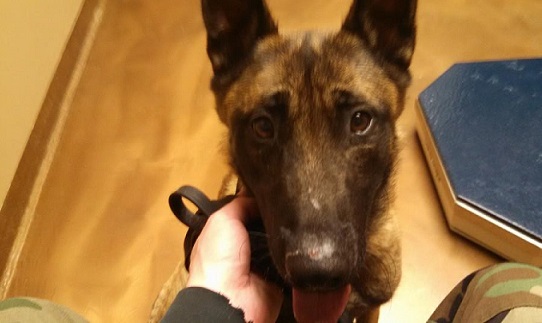 Karson lost about 14 pounds, but appears fine otherwise, WCPO said. He survived two bitterly cold periods, and back in January Popp had said he believed Karson could survive outdoors in wind chills falling to -20 degrees F.

A Facebook page dedicated to sightings of Karson had more than 27,900 fans.

The images below were taken by Jones, the professional photographer who spotted Karson. She posted these on her Facebook page:

Do you think your dog would survive two months on the run?

Top image from the Facebook page dedicated to finding Karson.

Oh, thank goodness! This is heartening news for another family I'm following on Facebook whose dog has been missing for two months. Their FB page is Sweetie Dog Needs Our Help and she went missing after the family was involved in a car accident. The dedication this family is giving to find their lost dog is amazing.

Dogs often get skittish after a traumatizing event like a car accident so I think Sweetie is being elusive, which is making it difficult to locate her. If Maya were ever lost, I don't think she'd stay lost for long because she is the type of dog that would seek out people no matter what. Pierson, on the other hand, would probably be elusive. If you remember his story, he was a stray in winter for at least a month before I found out about him. He did not let himself be caught easily.

Ace is like Maya and would most likely seek out people right away, but you never know what they'll really do. I hope the family finds their dog Sweetie. How sad.