Home » Can Running Cause Arthritis In Dogs? Playing Fetch Is Worse

When I tell people I’m a runner, a common response is something along the lines of:

Because I think sitting around is hard on the body and most people could stand to run just a little.

I used to have knee problems too, and that was only during my first year of running. After that my muscles got stronger and I haven’t had a problem since.

My dog, though, is 9.5 years old, and he has pain in his joints. This is actually something that started when he was around 3 years old.

Ace was my running partner for 6 years.

I’m surprised no one has ever blamed me for Ace’s arthritis.

Maybe this is because few people know that:

2. I ran with him so regularly.

Which brings me to the main question:

Can running actually cause a dog’s arthritis?

I’m sure there’s some web site out there that will say yes, but I don’t believe it.

You can do your own Google search for the causes of osteoarthritis, but it’s silly people would actually blame running.

[quote_center]Slow, steady running is healthy for people and dogs (within reason).[/quote_center]

Slow, steady running is healthy for people and dogs (within reason).

No vet has ever criticized me for running with my dog. I’ve interviewed several for various blog posts and articles. They encourage it as a healthy activity for dogs and their owners.

Vets see a lot of fat dogs, frankly. And as a dog walker, so do I.

Running didn’t hurt my dog, but playing FETCH did.

Even though Ace and I ran on pavement or concrete most of the time, our running was slow and steady. My dog only had to “trot” to keep up. He basically walked fast while I ran.

But our fetching games were another story …

When my dog played fetch, it was HARD, obsessive, maniac-crazy fetch! He’d stop dead in his tracks off of a sprint to get the ball. He’d brace hard onto his knees, often twisting his limbs and core.

And because my dog had no off switch, he wouldn’t stop unless I did. Then he’d collapse to the earth, often heaving with exhaustion.

Of course, I quickly learned to limit our fetch sessions to 5 minutes, but even in 5 minutes you can play a lot of fetch.

And my dog could get anyone he met to toss him a ball, a stick, a frisbee. If nothing else was available, chunks of ice would do. Or rocks.

It’s very hard, almost impossible, for people to ignore a dog begging you to throw a ball.

I’ve told complete strangers, “Please do NOT throw the ball for my dog!”

They throw it anyway. They can’t say no to that pleading Labrador stare. They can’t. 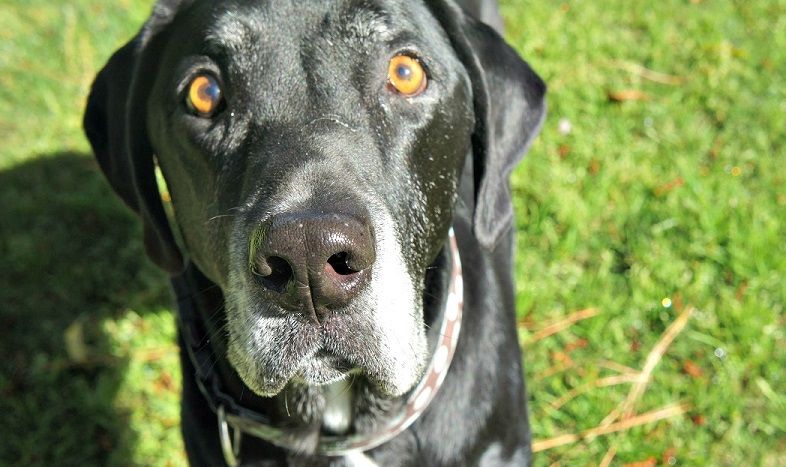 Be mindful of your young dog’s joints

These days, Ace is mostly retired from fetch. We play a little frisbee at the park every now and then, but only three or four throws.

This is not to get you to feel sorry for Ace. He is just fine.

All I’m saying is be careful with your young dog’s joints. He will get old one day.

Dog sports are very popular – disc dog, agility, flyball. I love all these sports and find working with my dog so rewarding. I can’t wait to work with a young dog again in the near future.

But, if you choose to play fetch, don’t drive your dog into the ground like I did.

Do a warmup before hard impacts. Learn how to do some stretching. Keep fetch or other intense games to short sessions. Stop before that tongue is long.

Because your dog is not going to stop.

Keep on having fun. Just be mindful is all.

Do we have any other fetch addicts out there?

How do you think running and other sports have affected your dog?

I agree! Haley's vet mentioned that her stretched ACL injury was more likely due to the quick darting or start/stop motions from playing fetch (anything that makes them change directions quickly) but walking or even some running is a natural movement for dogs that can be beneficial for dogs with arthritis. I makes you wonder just how much fetch we should play with them, especially when they're a little older.

I agree, the only time running is bad for a dog is if you're doing it before their growth plates have had a chance to close when they're pups. Even then it's any sort of rigorous activity that can cause injuries, not just running.

I'm pretty sure all the fetch we played with a frisbee is at least partially to blame for Laika's arthritis more than anything else. I still feel guilty about it, but it's nothing I've experienced before. I've always played a lot of fetch with my dogs and never ran into any problems.

You're right about the argument between running/sitting - with obesity being such a huge epidemic for Americans & their pets I'd much rather see people being active than avoiding it.

Our Brooks, a 1-year old Irish Terrier mix, isn't big into fetching, but is big into just manic sprinting when we let him off leash. He will run for hours on end, and not stop unless we make him stop. This is a good reminder for us that we should limit the manic sprint running, and keep on with the jogging with us.

Missy at the age of 12 has some pretty good arthritis according to the x-rays we had done when she got a limp. She gets the max dose of Cosequin for her size a day, and besides not really jumping on the couch or other things, she's pretty active and we get her out for walks. The longest I've had her recorded as doing is 1 mile. Pretty proud of her for that one. I think walking and not finding her edge has really helped her and also helped getting some weight off, she's dropped 2 pounds in the year we have had her. Thankfully we are not on a pain med, and I hope that with the Cosequin, good exercise and diet, she'll be around for a good while.

That's a good reminder that the little dogs can get arthritis too. Seems like we always hear about it in the larger breeds. I'm thankful she doesn't need any pain meds. I rarely use them for Ace as well, but I have them on hand for every now and then.

We don't believe in the arthritis being caused by running or knee problems either. It has been proven that with the correct form and training, running actually strengthens knee muscles and keeps arthritis at bay. It is other things in life, or improper running which causes issues. Katie's arthritis is pretty bad but we continually hear, if she hadn't been so active, she might well not be with us at this point as it all helps her body cope with the arthritis.

Good point about Katie, and I think of that with Ace too. If we hadn't been so active his whole life he might be overweight, out of shape or just plain stiff and that would not be healthy either. Heck, he's kept me from getting overweight too.