“Dog Whisperer” Cesar Millan is under investigation for “animal cruelty” after a recent episode of his Cesar 911 show, according to the Los Angeles Times.

I think we all know where this is going.

This is not about “cruelty.” It’s about shutting someone down for using dog training methods different than your own.

It’s about the Animal Rights Movement getting attention and taking advantage of true animal lovers.

Cesar does not need me to stand up for him. Actually, I’ll lose subscribers for mentioning his name.

But there are good people out there, true animal lovers, who are sometimes influenced by the Animal Rights Crazies. So that’s why I’m writing this.

This “investigation” started after an episode of Cesar 911 where Cesar was rehabilitating a French bulldog mix (so we’re talking SMALL dog) for serious aggression around pigs. I saw the episode, which aired in late February, and thought nothing of it.

In it, there is a brief moment where the dog nips a pig on the ear, causing the pig to bleed.

According to the L.A. Times, the animal cruelty allegations began after an animal rights activist saw the episode.

From the L.A. Times:

“The dog that was in question, that Cesar was attempting to train, broke away from him in the video, and immediately charged the pig. Now, what we’re hearing from the [complaining party] is that the biggest concern is someone had that pig, a male adult was holding one of those pigs, those rear legs, and holding the pig up, which made the pig squeal, which made the dog [go] into a frenzy. And it immediately charged at that pig. And the dog attacked,” Reyes said. [Aaron Reyes is the deputy director for the County of L.A. Department of Animal Care and Control.]

Before filing the complaint, the activist called TMZ and let it know that he was going after Millan, Reyes said. The complaint against the celebrity dog trainer was filed soon after.

Get the full article here.

Do you want to see some pigs that are truly abused?

Check out any factory farm in the United States. You’ll see some horrendous treatment of living creatures there, and it’s not even illegal.

But those pigs aren’t on TV. They are hidden.

What a strange world we live in if someone truly thinks a pig on a celebrity dog trainer’s 45-acre dog training ranch has it rough.

Cesar’s pigs are likely some of the luckiest pigs alive on this entire planet.

I know I’m pointing out the obvious here, but we have lost perspective.

Of course, this whole situation has nothing to do with the pig or animals at all. It’s about power and attention from a movement that was lost a long time ago.

Any true animal lover will focus her time on helping animals who are truly being abused or animals who need to find a home, get off the streets or receive basic care.

Some suggestions to make an actual difference:

– Make a donation to a small, local, independent animal shelter or rescue group you trust. They are providing safety and new beginnings to pets in your community. Not sure who to donate to? I recommend Labs & More San Diego.

– Educate yourself on the conditions that pigs, chickens and cows live in before ending up in supermarkets. At the very least, appreciate the hidden suffering they go through all their lives for our benefit.

– If you prefer positive reinforcement dog training (and most of us do), use your dog as an example and teach others about how you reached a high level of training using rewards, a clicker, treats and patience.

What are some additional ways animal lovers can help? 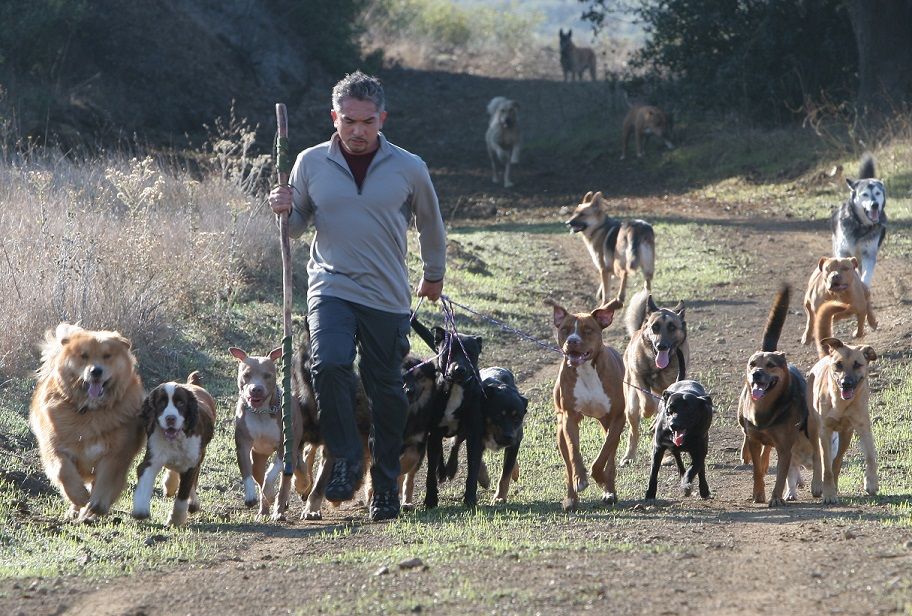 Image used with permission from CesarsWay.com, photo by Alan Weissman.

Have an opinion on this?

Submit a letter to the editor.

Is it OK to love a pet that hasn’t been abused?

I think the bottom line here is that Cesar milan is a true animal rights activist and lover. I don't know how anyone in their right sane mind could say that he is out to purposely and vindictively hurt animals. I believe wholeheartedly his whole life's work has been solely directed towards The betterment of relations between animals and their owners. To say that he has done anything against animals or to purposely inflict pain on them is absurd. While this incident may not have gone the way it was intended, let's be realistic for just a moment, there was no malicious intent involved. That's the bottom-line and frankly I'm tired of hearing about it. To those animal rights activists, pick your battles, clearly this is one that is just solely made for headlines. Not based on truth truth or realism.

Thank you for writing this article. It's nice to hear a voice of reason through all the craziness. We have really got to stop bashing people who may not train their dogs the way we would train ours. It's getting beyond ridiculous. Anyway, this may have been suggested, but a way to help animals in need would be to volunteer at your local shelter.

Lindsay Hi, we don't get Cesar's show here in NZ but I can't tell you how much we have appreciated his teaching on utube..It's also sad to see another young trainer whom I have also watched, publicly downing Cesar, at best, that is, in my opinion unprofessional. It's great to read your reasoned defence and I really hope he doesn't over personalise what is happening for him. I also hope Ace is feeling better.

Hi Jean. Thanks so much for thinking of Ace!

Thanks for the great story. I am getting a bit sick of the militant element in the animal rights movement.. A lot of what they do is more about political positioning than welfare time and time again.

How factory pigs are treated has nothing to do with how CM should treat his pet pigs - that's like saying any kind of dog abuse doesn't matter just because people are slaughtering and eating dogs in some parts of the world.

Trainers need to question each other, and when they see something wrong, they should speak up. I'm glad people aren't keeping their mouths shut when they see something that could be harming animals, even if it's on a popular TV show. If the producers really used the pigs with the intention of getting the dog to attack them to give the show more action, that may found to be against the law.