Home » Is Austin the Most Dog Friendly City in the U.S.?

Note: I’ve partnered with Pauly Presley Realty to bring you this post.

I live in one of the most dog friendly cities in the United States—San Diego!

People are DOG CRAZY around here. There are dogs in the grocery stores (pretty sure that’s illegal?), dogs in CVS, dogs in bars, breweries, coffee shops and outdoor restaurants.

Plus, we have plenty of dog friendly beaches, parks and trails. Not to mention dog walkers, groomers and daycares galore.

But the one city I always hear about as being even MORE dog friendly than San Diego is Austin.

What do you guys think? Is it true? Do any of you live in Austin?

Austin and San Diego are on pretty much every list for the top 10 dog friendly cities in the U.S. Others on the lists often include Seattle, Portland, San Francisco and Chicago. In my opinion, San Diego beats most of those cities—hands down.

The folks at Pauly Presley Realty put together a dog friendly guide to Austin, and it’s quite impressive.

I’d love to visit Austin and see how it stacks up to San Diego as a dog friendly city.

The guide is broken up into categories – dog friendly restaurants, bars, retail stores, parks & trails and of course adoption organizations.

And listen to this!

Austin has more than 35 dog friendly restaurants, according to the guide. 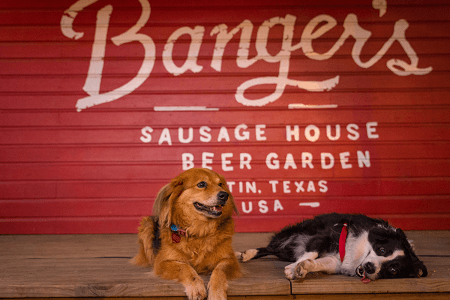 For example, Banger’s Sausage House & Beer Garden says on its website that it has its very own off-leash dog park and even has a specialty sausage made just for dogs on the menu. Wow!

Austin also has at least 22 dog friendly bars such as the Dog House Drinkery, a bar with an off-leash dog park!

The city also has at least 27 dog friendly retail stores and more than 12 dog friendly parks & trails, according to the guide.

Check out the full guide here.

Have any of you traveled to Austin? What did you think?

What’s the most dog friendly feature in your own city?

Let me know in the comments below.

Sign up to receive training tips & more in my bi-weekly newsletter:

I live in the Austin area. Today, I brought my pug/Pekingese mix to Tacodeli for lunch, the Domain (shopping area) afterwards where he was even allowed in the stores, and then to Target (though I kept him in his Sherpa bag while at Target to not draw attention). Wasn't a problem at all! I've also brought my dogs into Barnes and Noble here where they were greeted by employees. We've been kicked out of a B&N in another city because we mistakenly thought all of them allowed dogs...nope, just Austin!

Haha! Nice! Funny story about the "other" B&N!

I used to live in Austin years ago, so I find this hard to believe. But I admit that a lot of things have changed since I moved away. I used to work at the Town Lake Animal Center in Austin, which was a very high kill shelter. Now it is called Austin Pets Alive! and it is a no kill shelter. This makes me very happy. There were no dog parks or pet friendly places when I lived in Austin. But there were a lot of great hiking trails, river fronts, and other outdoor places that people took their dogs. I used to take my dog Smokey down the Barton Creek Greenbelt trail all the time. Even though it is downtown, most of the area is very well secluded. There are a lot of swimming holes, caves to explore, and trails to walk. We had a lot of good times there. We also made a 3 day hiking trip around Georgetown Lake, which is north of Austin. There are also places for hiking and swimming in San Marcos, San Antonio, Bastrop, and many many more areas surrounding Austin.

I visited Austin many years ago, but I don't recall whether or not it was dog friendly. Back then I was fresh out of college and more interested in the bars and clubs. Next time I'm in Austin with the pups I'll have to check out the guide of dog friendly businesses. As for my hometown of Orange I'd have to say it's dog friendly since I'm allowed to take my service dog puppies nearly anywhere without hassle.

Unfortunately I have never been to Austin! I have been to San Diego, including to a pub that welcomes dogs inside (met the prettiest pair of Golden Retrievers that day). I can't draw a true comparison because of lack of data on all sides, but I'm going to plug Minneapolis as a very dog-friendly city. Sidewalk Dog is our analogous guide here.

I'm from the Minneapolis suburbs and I also think it's a very dog friendly area! So many little stores/shops geared towards pets and so many dog friendly parks and trails.