Home » Get Your Dog to Pay Attention Off Leash: Be Unpredictable

Julia Thomson is a contributor to That Mutt. She writes about country living at her blog Home on 129 Acres.

One of the things I’m trying to work on with my dog Baxter is getting him to “check in” with me when he’s off leash. This means being more aware of where I am, or even better, coming over to touch base once in a while.

However, I’ve realized that I’m giving him lots of excuses not to check in.

Because we live on a busy road and there are no sidewalks or street lights—and because we have a big property with lots of areas to hike—most of our walks are across the fields.

Every morning, we walk around the perimeter of one of our fields, usually counterclockwise. He knows this, so once he knows which field we’re walking in, off he goes without looking back.

Now, I like an independent dog, but as I’ve shared before Baxter is a little too independent sometimes. As in, he sometimes forgets I exist in favour of following his nose. 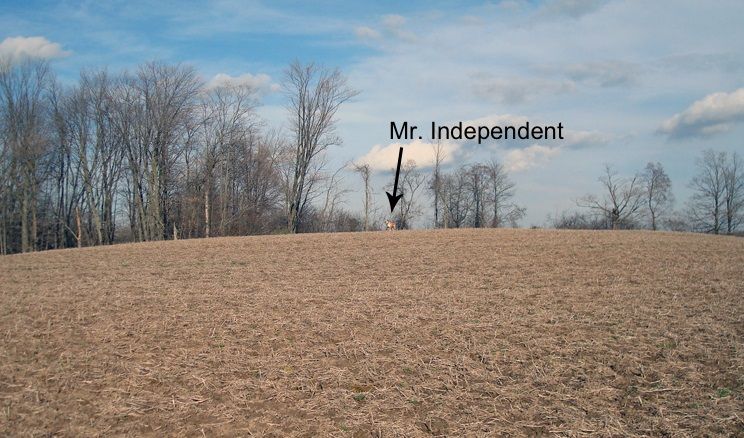 I stopped walking the other day, just to see how tuned in to me he was. Dude just kept on walkin’… and walkin’ and walkin’. Finally I called his name and turned around and walked the other way. He stopped and took about half a minute to think about what he should do, but eventually he followed me.

We started out again. Once again, Baxter trotted along the edge of the field, out in front of me, full of confidence. Rather than stopping this time, I took a sharp left turn across the field. I didn’t call his name. He looked over his shoulder and saw I wasn’t behind him. He turned left and followed me.

So now I’m trying to be unpredictable.

Instead of our usual routes, I follow the crest of a hill. Cut across the field. Walk in a big X from corner to corner.

Baxter still wants to follow the perimeter of the field—that’s what he’s used to and that’s where the best sniffs are. However, he’s realizing that I’m unpredictable, so he’s watching me more than he used to. If I head off in another direction, he’ll stand still, trying to figure out where he should go next, and eventually… usually… he’ll head in my direction.

I’m trying to walk confidently, not look back, not change my course, not call his name. I want him to realize who’s in charge, and that he has to follow me. 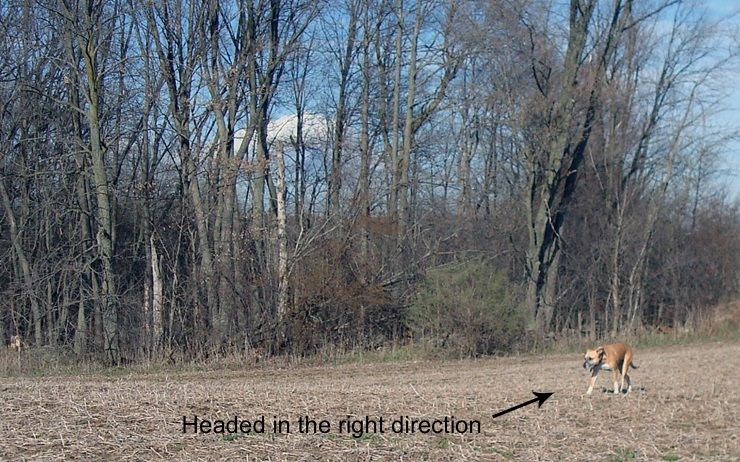 Sometimes I hide, ducking behind a hill or tucking myself behind a tree, just to try to create a bit of a sense of urgency with him. Sometimes it works. Sometimes it doesn’t.

He’s not always close to me, but he’s starting to pay more attention to where I am. The battle against Distracted Doggie Syndrome continues.

How do you get your dog to pay attention off leash?

Other posts about Baxter:

How to train your dog to be off leash

How to increase your dog’s focus on walks

Hi, I have 13 months old Husky. Who love to be off leach, to snif around in the wild & explore the woods. He fallows me in the trail,& comes back when I call him. But after 30 to 40 minutes he runs off alone in the woods or anywere? I call him ,& I use my whissel....He comes back to me when he is ready! Sometimes 15 to 20 minutes later? How should I greet him? Should I encourage him for coming back? Or should I put him back on the leach?

i have this problem with my girls. the oldest not so much now, however, when she was younger, it was a problem sometimes. the 2 younger girls, i could not take off the leash, they would be gone in a flash. i have too many distractions, 11 acres, deer, etc. everywhere and they are terries, mini schnauzers and they would take off. when they were younger, they were much better, sometimes. but if they got loose, i would spend hours searching for them. if i had a very large fenced in area it would be okay. they do okay in their small pen, which is abt 40x20 or so...but i am scared to take the chance out in the open. i know if you run the opposite way instead of chasing them, they are supposed to come after you, i have tried this, did not work most of the time. my girls are too smart.

I've experienced the power of distractions too, and I agree sometimes it's better to just go with the leash. It's about finding what's best for you and your dogs.

Changing directions suddenly is great advice! Both of my pups are fairly independent, although Buzz's attention can be regained immediately by pulling out a chuck it ball. Missy is my little adventure pup and can't be trusted off-leash, and I'm not sure she ever will be. If she sees a rabbit, squirrel or cat, she's gone! I've been working on her off-leash abilities by putting a backpack on her (makes her focus more on me) and using a really long, 50 ft leash I can bring her back to me if necessary...and it's still necessary ;-)

I've been through that experience... and still go through it every so often. Good luck. Hopefully your persistence will pay off.

My dogs love playing the chase game. I try not to chase, but if my dogs aren't paying attention and I run the opposite direction they will usually chase after me.

Sometimes it's about whatever works.

I've tried hiding behind a tree and my dogs quickly find me and just look annoyed that I would do something so childish...and then they're off on their doggie pursuits.

At least they come find you! Sometimes I feel like Baxter could care less. Doggie pursuits usually win out!