Home » Do You Own A Type of Dog People Tend to Be Afraid Of? (Guest Essay)

Note: Thank you to one of my readers, “KL,” for contributing this essay.

I was walking with my dog at our favorite off-leash hiking area, and from about ten feet away, I heard a woman say this to her husband.

Oblivious, my dog trotted along with her nose to the ground, tail waving slightly as it does when she is enjoying herself. I called to her, and we walked off in the opposite direction.

The path is constructed as a circle, so we crossed paths with these people a couple of more times. Each time, we turned around and went the other way, my dog promptly and obediently responding to my call. Each time, the woman made a nervous comment that I overheard.

We weren’t doing anything wrong, but it was clear that this woman was afraid of my dog and wished we would leave the park. 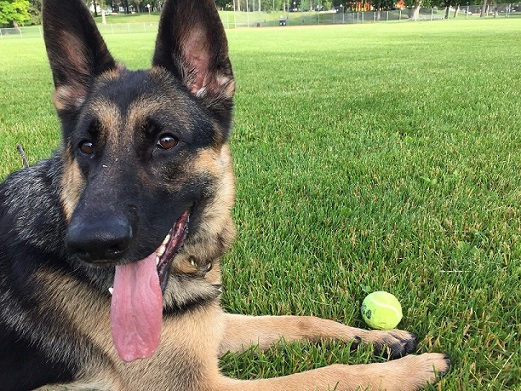 This was far from the first time things like this had happened.

As my puppy grew out of the floppy-eared fuzzball stage and into that distinctive black and tan saddle pattern and pricked ears, people we met began to keep their distance. Parents started crossing the street with their kids when they saw us coming. Teenagers would call out warnings to their friends: “That German Shepherd will bite you!”

This avoidance confuses my dog from time to time. She doesn’t know she is a German Shepherd or what that means to people. I may laugh privately at someone’s overreaction if it’s comically over the top, but the reality is that some people have deeply rooted fears of this breed. The wolf-like silhouette and trademark stance are practically iconic, and they are a powerful symbol.

My dog and I are a data point. She didn’t ask for this role, but she’s a breed ambassador anytime we are out and about.

We’re in good company with the responsible owners of pits, Rottweilers, and Dobermans, to name a few, and remembering what this means is important: It means some people will notice my dog, and a subset of those people will judge an entire breed by how she handles herself.

It is essential that I am prepared to recognize fear and respond appropriately.

Being aware and sensitive to this requires an extra layer of alertness when we’re out in the community. It means that I can never give the impression that I am not in control. I have to uphold high standards for her public manners; behaviors that are normal at home and that would communicate playfulness or frustration may be perceived as more aggressive than the same behavior in other types of dogs.

It means that my dog would ideally look friendly (luckily, she is generally outgoing). I must be a courteous handler who is aware of the presence of others and allows them their space. It might even mean altering a planned walking route in order to avoid looking like we’re following someone who seems nervous. 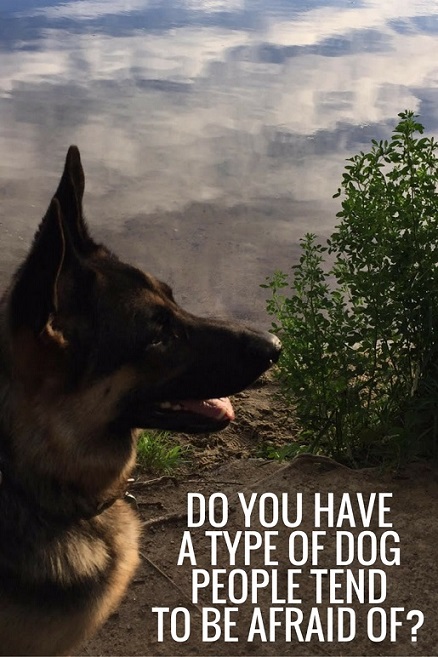 I’m not here to say that the kind of prejudice that comes from fears of particular breeds is a good thing, or something to enable. It exists, it’s often understandable – perhaps based in past trauma – and it doesn’t strike me as constructive to point fingers at people for feeling that way; fear isn’t rational.

The best thing I can do is show my dog as a positive counterpoint. So I can’t complain about being a breed ambassador. It’s an opportunity to demonstrate that this breed I love so much can be an excellent pet and sport or working companion when appropriately socialized and trained.

My dog is a pet and will never be bred, but every time she wins over someone new, I see her contributing to the future of German Shepherds as a whole.

Do you own a type of dog people tend to be afraid of? How do you work with that?

What does being a breed ambassador mean to you?

Read KL’s past essay “What do good breeders and good rescues have in common?”

Why we need dog awareness, not pitbull awareness

How to piss off a Labrador owner

People are actually afraid of my labrador. She's black, 65lbs, medium size, lean, and muscular with large paws. Typical lab. They say things to me all of the time about how they or their dogs are scared of big dogs...etc. She's not even a big dog...if I had a great dane, or mastiff, I could see it, but she's the sweetest little thing to us. So I don't think it matters, people are weird.

Sometimes putting a muzzle on your dog can lead to two things-one people will think your dog is automatically bad and that is why they have to wear a muzzle and two, they cannot defend themselves if a dog comes up and attacks them. I have german shepherds that don't do well with strangers. We work on it daily but I don't think they will ever be okay with strangers (I feel this is okay because not all people are good with other people so why do our dogs automatically have to be good with other people and dogs). I have accepted this and I tell people that my dogs do not do well with strangers. Luckily we have acreage that I can walk my dogs on so that they get their daily exercise and we will always make sure that anywhere we move has some type of acreage so that we do not have to find populated walks to exercise our dogs. It is a small sacrifice for our dogs who live such short lives and give us so much.

i have a pit/cane corso mix (Jasmine), she's about 2.5 now. In the past 2 motnhs we've started her at real out of home training at a local place. Before training, she was protective of her home but knew who the "nice people" are. Even then if someone walked in that she didn't know, she's all bark anyways. She literally has never had a true mean bone in her body. But when we started training, that kind of changed. She doesn't like being around dogs she can't see or meet. *she was attacked when she was just under a year old by a neighbors dog that until it happened she couldn't see only hear through a door* so we've worked on it and she's definitely gotten better. but we still have a long road ahead because before I had this dog that just wanted to love on every breathing thing in sight and now i'm contemplating putting a muzzle on her when we go for walks so she isn't tempted to react in any harsh manner. We have another dog, pit/boxer mix (Ziggy; literally the sweetest and most calm puppy i've ever encountered in my life!), they live together. eat together, go outside together. they even cuddle on a daily basis. they LOVE each other. but any other dog comes around or gets to close to Ziggy and you see a fearful aggressive reaction come fro Jasmine. It's scary for me because although where i live majority of the dogs are pitbull or some sort of pit mix, she may show her attitude to the wrong dog and get hurt or even worse she may hurt a dog. I never imagined I would encounter this, and i've looked at countless training sites & talked to my trainers, they act like there's minimal hope and that is such a soul hurting thing to feel. I guess this minimally goes with the topic, but i wrote it to say that i understand how people treat certain breeds, because even though mine will play into the "mean" role some times, i will always have to show i know how to handle her and control her no matter the situation so no one tries to look at other large/beefy breeds with fear.

Oh I'm so sorry to hear you're dealing with some aggression issues with your girl. That sounds so stressful. I hope you're able to work through it. As for the muzzle, you could start training her to wear one so she's used to wearing it if you do decide she needs it. You could make it a "fun" trick for her.

i dont like chows. i have seen some nice ones. a friend of mine has some nice show chows. i pet them. however, when i was abt 5, my next door neighbors chow attacked me for no reason. he knew me and i was just petting him on the back, he turned and bit my face, i had to have over 50 some stitches and still have a scar on my face today. i have read that chows have even been known to attack their owners and they are one breed that you should not have around kids. i am not fond of doberman's either, a neighbor had one and he rushed out of the house and attacked my brother as we were walking home from school. we were in the street and not on the yard. the house was set way back from the street as well. i know some sweet ones, but i always keep my guard up. there are even some small dogs that are rough, but since they are small, i am not scared of them. i hate it when people call staffordshires pit bulls. they have a bad ramp as well. they used to be called nanny dogs. i love german shepherds but hate how the breed has changed in the us, with the low back and walking on their hocks.

You know I'm Pipi the dobie's mom. It happens to me all the time. It makes me sad, to be honest. When they don't cross to the opposite sidewalk it's me ,because I can see and sometimes hear comments about my Doberman. People raising their little dogs, going down the street with their kids, women running changing their route... I don't know how to manage that, I can't and I tired to tell people that my dobie is just a dog not a shark! So, that the situation... Sad. Big dogs have bad reputation and we have to deal with that..