“For nearly their whole lives, we try to hold them back, try to stop their pulling.
Then, in their final years, we just wish they’d pull, pull again.” – Me

Friday night we lost two family members. Both our mutt Ace and our cat Beamer died.

One week ago, I could not have imagined I would lose either of them, let alone both.

Beamer was sick all of last week, so sick that he turned down bacon and baked salmon! We found out he had advanced kidney disease, and on Friday we decided to have him euthanized. 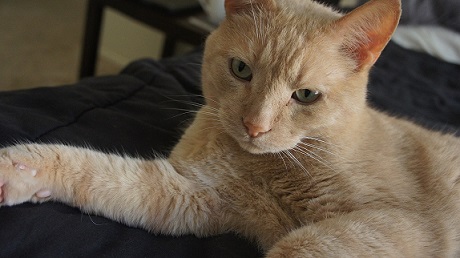 Ace was having a good, normal day. However, about an hour after we got home from Beamer’s appointment, Ace walked over to the corner of our living room. I noticed him lying there, unable to get up, and Josh and I were both there while he died fairly quickly. We think he must’ve had a stroke or a heart attack.

At first, I was shocked to lose them both at once. Now, I think it’s special they went out together. 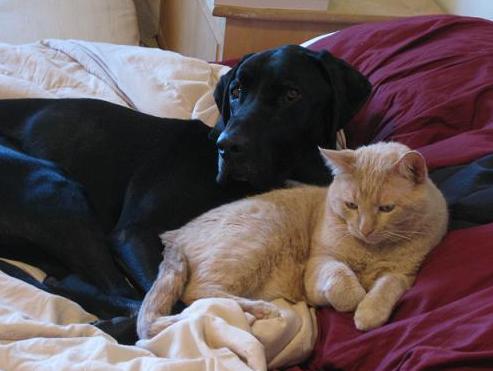 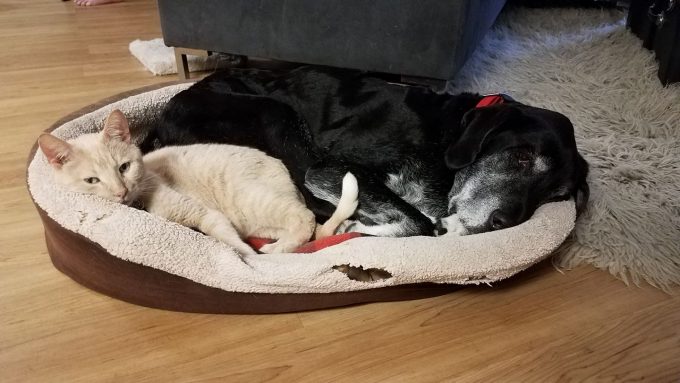 So what do I say when there are no words?

I cry into the shoulder of my remaining dog. He’s never experienced these kinds of sobs. I hold my cat Scout to my chest; he’s one of our “originals.”

They seem to be doing OK. Animals move on and live in the moment. But they, too, have lost their companions and routine. They both looked up to their “big brothers.” 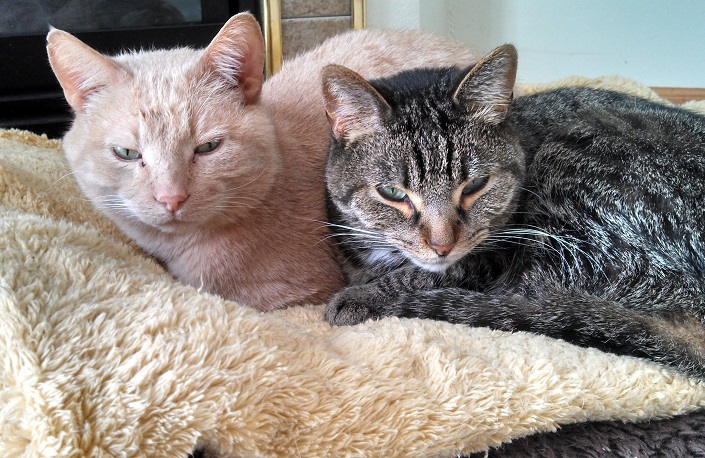 And now I wonder, how will I go on without Ace?

Sunday morning, Josh and I got up early and drove to the trail, to continue some kind of “normalcy.”

We ran 7 miles up the mountain—an average long run for us—but the heat and mental exhaustion made it extra difficult. I shuffled, one foot in front of the other, and made the 7 miles back down.

That is how life will be for a while. One foot in front of the other.

Thank you, sweet Ace. I will of course write more to honor my boy when I can find the words. 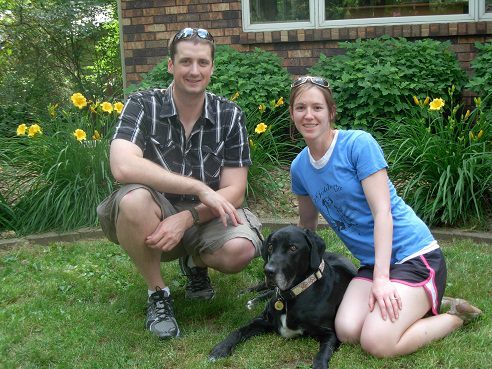 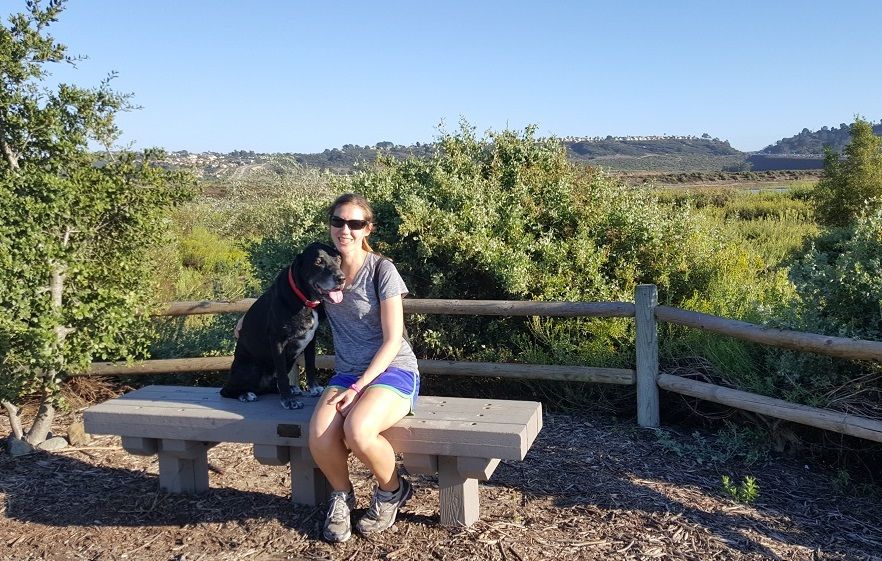 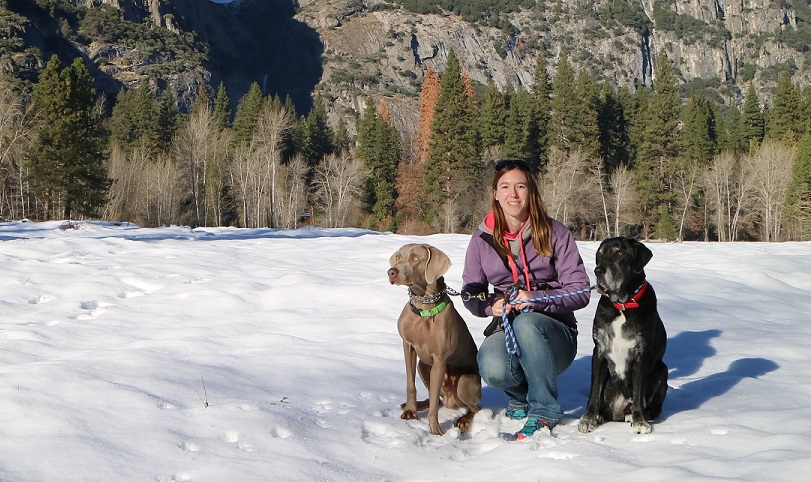 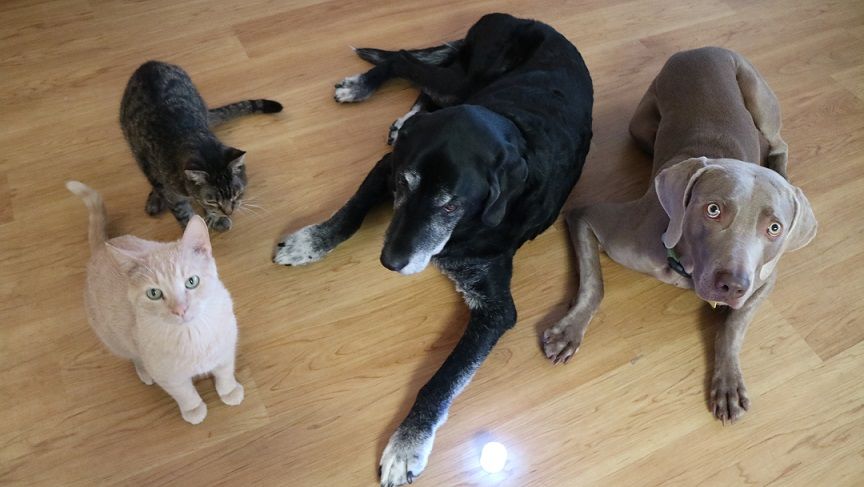 Our pack of four

This week, I will most likely be posting the blog articles that were written and scheduled before Ace died. Thursday, I have a fun giveaway/review post scheduled.

We also have an exciting business announcement to make next week. I always thought Ace would be around for this announcement, but he helped us get where we’re going.

I know this post is old but I'd like to share my appreciation and also potentially hoping you may be available for an email chat one day. I went on the internet to google this very thing. I felt like I certainly must be the only one experiencing this. On Wednesday I lost my 15 year old cat to old age. And on Friday I found out my beloved dog has advanced kidney disease. After being in the ER for 5 days I'll be picking him up today to come home. And although he's coming home with treatment and care, the vet believes he will be coming home to get comfortable. I feel so overwhelmed in this grief. And shocked. And angry at fate or luck or whatever it is. This was my first of each cat and dog in my adult life. And I'm sorry it is at the expense of your own suffering, but this post has helped me know I am not alone in this experience. So thank you for that.

I am so sorry for your losses. I too have had the awful pain of losing a "fur baby." It really does break your heart. I still cry and it has been 2 years. They just steal your heart. I feel for you and your husband along with Remy and Scout.

Lindsay, I'm so very sorry to hear about the losses of Ace and Beamer on the same day, that's just unbelievably hard. I lost my previous pair of dogs within 10 days of one another in a similar way - one declining over a long period and one suddenly. Take the time you need for yourself and may your other pets be a comfort to you. I know that Ace was your inspiration for this blog and so many other things and will always be with you.

Thank you so much, Lara. It means a lot and I know how special your dogs (current and past) are to you as well.

I am so sorry for your double loss Lindsay! I know how hard it is to lose a dog and a cat, so two on the same day...my heart bleeds for you guys! As painful as it is losing these wonderful family members it is so worth it for all of the love, good times and learning we receive. You are doing a great job on your blog Lindsay. I look forward to reading your articles as do many people and I admire your athleticism. Keep up the great work and I wish you all the strength in moving forward and healing (although we never fully do).

Hi Lindsay, I saw your newsletter the day after we said goodbye to Linus and made a mental note to check back, but couldn't open it at the time. I'm so sorry to hear about Ace and Beamer. Your blog is one that I've followed since the beginning so even though I've only met you and Ace in person a couple times you seem like old friends. I watched Ace for a short period while you and Barbara went in to get coffee and I could see his bond to you as he didn't take his eye off you once you left. Rest In Peace, Ace and Beamer.

Thank you so much Colby, I've been thinking of you and Ali a lot. Thanks for watching Ace that time we went in to get coffee. I know he pretty much barked the whole time! Haha. Who would've thought that you, Barbara and I would all lose a dog in the same week? So sad, but we're so lucky to have had them.