What is Disc Dog?

Home » What is Disc Dog?

You may be familiar with the story. A pit bull that no one wanted. With dedicated owners finds his calling as a disc dog and becomes a national champion in the sport, as well as an ambassador for his breed.

This is the story of Wallace.

Today, I’m excited to kick off a new series here on That Mutt about dog sports.

Playing and competing in organized sports with your dog can add so much to you and your dog’s lives. The activity can have mental, physical and emotional benefits. Your dog has to think and move in particular ways. And the bond that you develop can make your relationship even more special.

This was Roo Yori’s experience with his dog Wallace.

Roo met Wallace at a shelter where he volunteered in 2004. He and his wife Clara adopted Wallace a year later. Wallace was an extremely driven dog. To find an outlet for his apparently boundless energy, Roo introduced Wallace to disc.

Disc is a sport where dogs catch flying discs (brand name Frisbee). There are two main streams in disc: toss & catch (basically fetch) and freestyle (where dog and human complete a choreographed routine of tricks set to music).

Roo had first gotten involved in disc with his dog Ajax. When he saw how happy Ajax was when they were playing, he was hooked. Wallace took that happiness to another level.

“I knew that it would be fun for us,” said Roo. “But practicing together every day both with Ajax and with Wallace… I learned how they thought and what motivated them a little bit more and we created this really special bond with an activity.”

What is disc dog?

Many people play fetch with their dogs and may even use a disc. But organized disc takes a casual backyard game to a different level. Disc dog started during the Frisbee craze in the 1970s. Now dogs play the sport around the world. Local clubs host meet-ups, training sessions and small competitions.

All types of dogs and all skill levels can compete. Usually categories include novice, amateur, pro or expert. And national organizations host large-scale competitions that draw teams from around the world.

While each organization has their own rules and scoring system, there are some similarities. In toss & catch, you get one disc and a set amount of time. “You just try and get as many throws as you can and depending where on the field your dog catches that disc you get a certain amount of points,” explains Roo.

Roo’s favourite event was freestyle. “You go out there and try and figure out what you and your dog can do with a bunch of discs within two minutes of time.” Routines are typically judged on the dog’s athleticism, the human’s abilities, how you work together as a team and the number of successful catches.

Typically the freestyle and toss & catch scores are added together for an overall score.

For most local competitions, participation is simply a matter of registering, paying your fee and showing up. “It’s very welcoming,” says Roo. Teams must qualify to enter more competitive levels.

How to get started in disc dog

If you’re interested in trying disc with your dog, it will help if your dog already likes to play fetch, but it’s not a requirement. “A lot of the things that are involved with disc you can teach,” says Roo. “The most important thing is a good bond between the humans and the dog… and whether you’re up for challenges and learning new stuff.”

For dogs that play fetch with a ball or toy, it’s usually easy to transfer their skills to a disc. But your dog initially may not know what to do with this piece of plastic that is flying through the air.

Eventually he works up to having the dogs take the disc out of his hand and then short throws.

“You see that people have their dog sit in front of them and they throw the disc at the dog’s face and it hits them in the head. And they’re like what the heck? Have them chase the disc. Don’t throw it at them.”

Where to buy discs for your dog

All discs are not created equal, so make sure to get one that is safe for your dog. Some are hard and can chip the dog’s teeth. Others have a sharp edge that may cut your dog’s mouth. Roo recommends Hero Disc USA, Hyperflite or Discovering The World as dog-friendly disc brands.

There are a number of disc clubs around the country, so there may be one near you. Connect with them to get tips and learn the sport. Roo also says the web is a great resource. “I learned by watching videos of people online in different parts of the country and then going out in my backyard and figuring out how they did it.”

Keep training sessions short—just a couple of minutes. Sprinting and jumping for a disc is a lot of work for a dog. Be aware that jumps can impact your dog’s joints. For Roo, this meant keeping Wallace lean and making sure he was jumping under his own power.

Some disc dogs do vaults, where the dog jumps off the handler’s body to launch even higher. Adding three to four feet to a dog’s height makes the landing much more impactful.

Roo says that people should also work on their own disc throwing ability. “Your placement of that disc can definitely impact your dog. If you have a bad throw, then your dog has to adjust in the air to get it. If you see crashes, that’s probably… a bad throw. The better you can be yourself at putting the disc in the right spot to create a safe jump is pretty important.”

Lessons learned from training with Wallace

As your dog and you are learning the sport of disc, you will likely be learning things about yourself and each other.

For Roo, he learned that he needed to see failure as part of journey to success. “I’m worrying about… are we going to be able to keep up with the other teams and all the stuff we as people think about… But Wallace gave everything he had every time he went out there. It didn’t matter if he missed the disc or caught the disc. He didn’t care. He was having fun and he was giving it everything he had.”

Roo took Wallace’s lead and made sure that they failed safely—over and over and over again. Both he and Wallace learned from their failures and then improved themselves, their skills and their game.

“Because we faced them and dealt with them we were able to proceed regardless of the situation we were in because we knew how to overcome our weaknesses and capitalize on our strengths.”

When I asked Roo about the most challenging part of playing disc, I expected him to talk about training or even learning how to throw a disc. Instead, he talked about trying to overcome the breed stereotypes of Wallace being a pit bull.

Fortunately the disc community was very accepting and welcoming. But when competing Roo had to make sure they didn’t go to a city that had a breed ban that would put Wallace in danger. As well, Roo and Clara became targets of people who were against pit bulls.

“Having to navigate that social aspect, the stereotypes was most challenging. At the same time it needed to be done and I felt proud that Wallace was able to rise above it and succeed… and show there’s more to the story… There was definitely a side that wasn’t being told and fortunately Wallace was able to tell it pretty well.”

Today, Roo and Clara continue to be vocal advocates for pit bulls and dog adoption. After Wallace died in 2013, they set up Wallace the Pit Bull Foundation where their mission is to improve the lives of dogs and the people who care for them.

The list of Wallace and Roo’s accomplishments in disc is long. In 2006, they won the Cynosport World Games, and in 2007 they won the Purina Pro Plan Incredible Dog Challenge National Championship for disc.

But for Roo, the biggest highlight was the bond and connection he built with Wallace.

One night, it was just him and Wallace at a local park.

The park lights would shut off after 9 or 10 o’clock, and Roo was trying to get a practice in before the lights went out. “I ran out on the field and as soon as I was about to throw the lights shut off.”

The night was foggy and he couldn’t see the field around him.

They went through their whole routine with Wallace disappearing and returning. “It was awesome. Just a really unique cool experience. The connection that we had. Even though I couldn’t see him half the time I still knew he was hitting discs and I could hear them not touch the ground and he would still swing back to me and we were in sync. It was a really neat experience.”

Learn more about Wallace and Roo’s story in Wallace: The Underdog Who Conquered a Sport, Saved a Marriage, and Championed Pit Bulls– One Flying Disc at a Time.

Have you ever tried disc with your dog?

What dog sports would you like to see in future posts? Let us know in the comments! 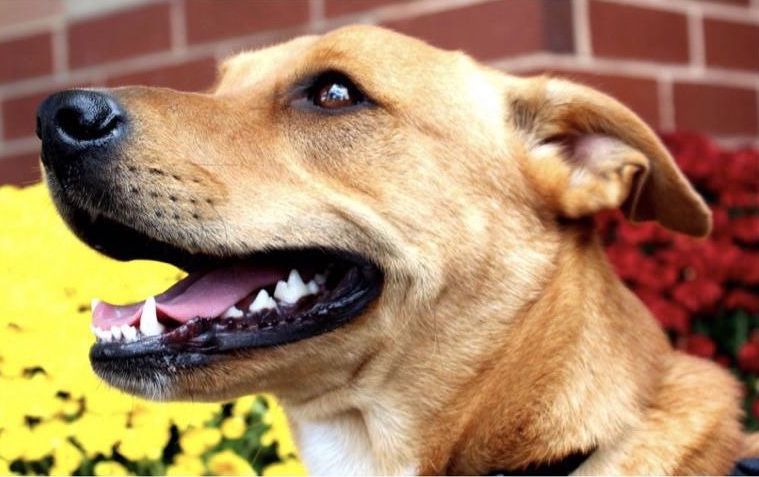 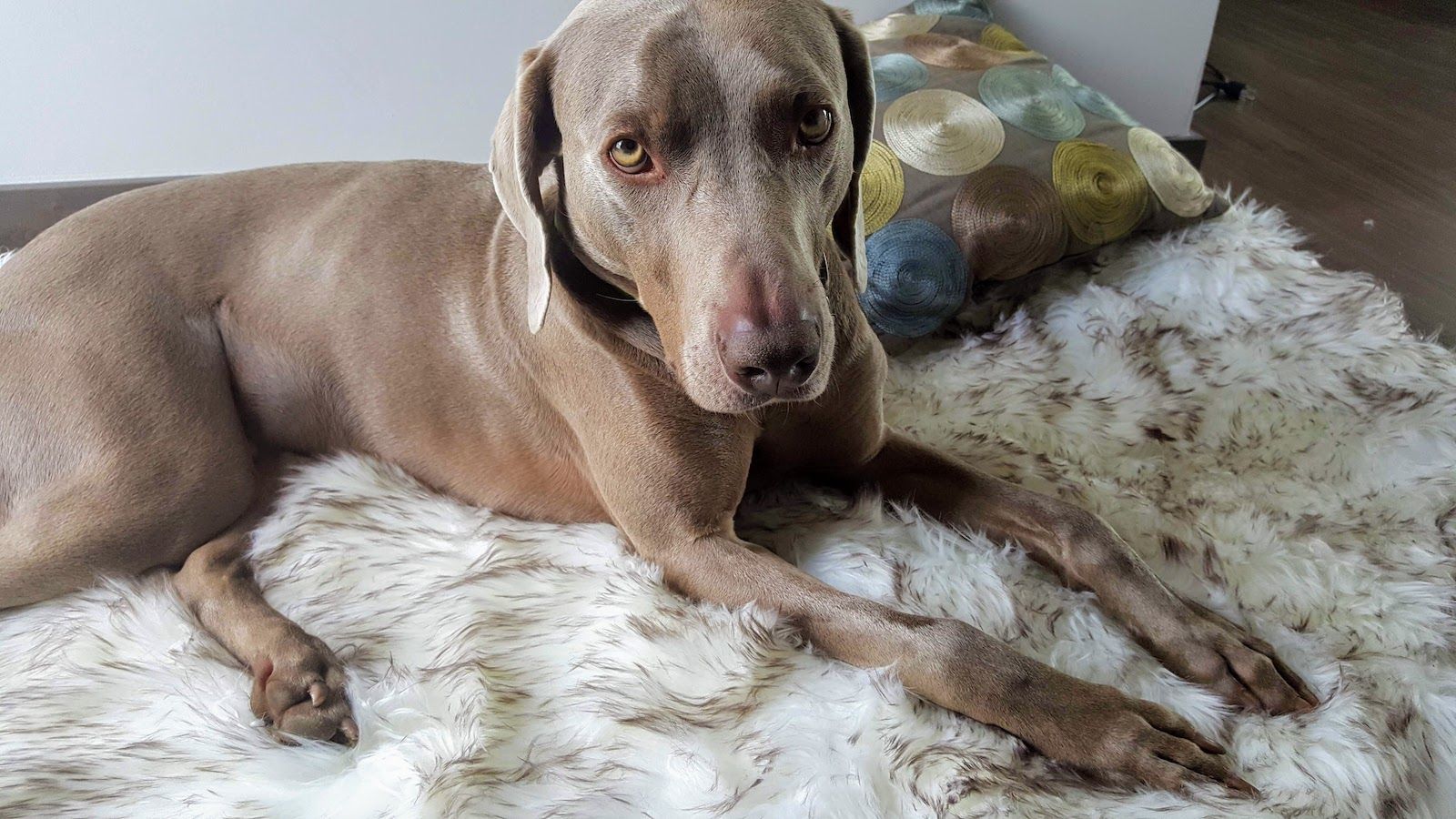 Next
Dogs and COVID-19
Click here to cancel reply.

Thanks for sharing Wallace's story, Julia! Loved the YouTube video - the way Roo threw the discs, and the way Wallace caught them was really cool!

I agree. It was so fun to talk to Roo, re-read the book and watch the videos. The fun they're both having is obvious.