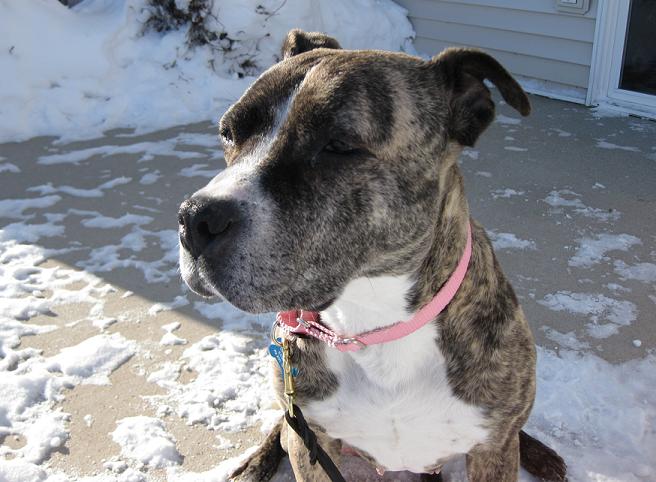 It’s been interesting living with a dominant pitbull. I’m used to my mutt Ace – a.k.a. the boy who pees like a girl and lets cats corner him. I always stress how important it is for me to be a leader to Ace, but it’s even more important to be a leader to Vixen, our foster dog.

In the last two weeks, Vixen and Ace have gotten into some minor scuffles. That’s to be expected. Vixen was stressed from living in different environments with little structure, and Ace’s home was being invaded by a new dog.

The good thing is, growling, barking, lunging or snapping look and sound worse than they are. Usually it’s over in a second. On the other hand, it only takes a second for a serious injury to happen. That’s why it’s so important to catch and prevent fights.

When Ace and Vixen first met, there were no issues. I had them meet at the kennel where Vixen was temporary living. This was a mutual ground for the two dogs. Ace was not threatened, neither was Vixen. We were careful not to let them meet head on so they wouldn’t feel challenged or scared. We kept both dogs leashed and allowed them to smell each other.

Once I brought Vixen home, the most important thing I knew to do for both dogs was to take them for a walk together. That was the one way I could be certain to be their leader from the start. Even though it was below zero, the three of us migrated around our neighborhood and back. Had it been summer, I would’ve walked the dogs for a good hour. Since Vixen was shaking, I brought them in pretty quickly but made sure to take them out for another walk later in the evening and every day after that no matter how cold it gets (-28 with a -46 wind chill as I write this Jan. 13).

When the three of us walk, I am in front, Ace is at my side and Vixen voluntarily trails behind. This was the perfect way to put her in a following position. She knew right away that I decide where we go, no dogs walk in front of me and she is expected to stay calm. On walks, Vixen and Ace are in a focused, working mode. They walk with their heads and tails down and relaxed. They focus on moving forward, not on each other. 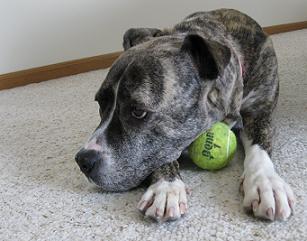 Vixen has growled or snapped at Ace about five times in the last two weeks, but she has never made contact or hurt Ace.

Each time Vixen showed aggression, it was because myself or another person near her was not in control of the situation. Vixen is a dominant dog, and a pitbull is a very strong breed. If I step down from my leadership role for a second, she takes over. That’s why I need to be in charge at all times.

I love pitbulls, but I take even Vixen’s tiniest aggression issues very seriously. She needs to find a home, and because of her breed she will be judged even more than an average rescue dog whether it is fair or not.

Here are some tips for showing leadership over a dominant dog:

When I am with Vixen, and especially when I am with both dogs, I make sure to keep my head up and shoulders back. I purposely move into Vixen’s space and nudge her gently but firmly out of the way (like dogs do to each other). She always steps back like she would if I were the dominant dog. Instead of pulling her back when her excitement escalates, I step into her so she has to choose to retreat. I often step between her and Ace and bump one of them back.

2. Be aware of the dog’s body language.

A dog’s body language is easy to read if you pay attention. The second I notice Vixen with a high tail or ears, a waving tail, raised lips, staring eyes or excited movements towards Ace, I distract her. Usually a light “hey!” or “look here!” is all that’s necessary. Now that she knows what I want, I just snap my fingers. She immediately relaxes and sits or lies down. If I don’t catch it, the energy or tension could escalate.

Even when Ace and Vixen got into small fights, I tried not to yell or freak out. It was best to stand, move towards them and give a firm verbal correction, “No!” This was all it ever took to get both dogs to calmly sit or walk away from each other. I never separated them right away. In every instance, both dogs had gotten over the incident within seconds. I was the one worked up and did my best not to let them know it. There was no point in turning something into a bigger deal than it was. It was important for the two dogs to learn to act calm around each other. By separating them or screaming at them, they wouldn’t learn anything. They would probably be more excited and confused.

A dominant dog will always barge ahead through doorways. Vixen never had an issue with this because she is respectful of humans. But to enforce my role as their leader, I walk through doors ahead of the dogs. Sometimes I make them sit and stay until I release them.

If for some reason you want the dogs to go through the door ahead of you, do it in a controlled way so you are directing them through. Don’t let them push each other and you out of the way and convince yourself it’s OK because you wanted them to go first. You didn’t want to be knocked over!

5. You decide when a dog can approach you.

Sometimes a dog is possessive of its owner. Vixen is not allowed to sit between Ace and I unless I invite her. Her growling and snapping instances all occurred when someone was petting her while Ace tried to approach. To prevent this from happening again, I have to decide who approaches me. When I want to pet Ace, Vixen is not allowed to come over and nudge me or push Ace away. When I am petting Vixen, Ace is not allowed to sneak up or crawl over to us. The second I see a dog approaching me, all I have to do is snap my fingers or say, “hey,” and the dog stops or retreats.

If I’m working at my desk and notice one dog has claimed the space at my feet, I don’t pull the dog out of the way. Instead, I stand and move into the dog’s space so he or she has to back away. Sometimes I will let one of them sleep by my desk, but only on my terms.

6. You can take away food and toys at any time.

Vixen shows no food aggression towards humans. But when she first got here, I had no idea if she was food aggressive or not. Because she is a strange dog, I made sure she knew I was in control of the food.

I fed some kibble to Vixen by hand, which she ate gently. Before every meal, both dogs have to sit and stay. Sometimes I put them in their kennels to eat, sometimes not. Vixen learned very quickly that she does not get to eat until I release her. She has never shown any aggression around food. The first couple meals she ate here, I made sure to touch her and take her food away several times while she was eating. She had no problem with this, but was always happy to have her food back. Good girl!

Use positive reinforcement training by giving food or attention to the dog as a reward only when the dog is calm.

7. Don’t act too excited or get the dog excited.

Vixen’s aggression issues came out while she was between Ace and a person, however in almost every instance, the person was talking in an excited voice to one or both dogs. This is a disaster waiting to happen, and it is so hard for people to remember to stay calm and relaxed around dogs. The more excited we act, the more excited they get and the more likely a bite will occur. Even my dog bit my boyfriend one time when we were all play fighting. This was totally our fault, not Ace’s. People just never learn (myself included).

8. Don’t let the dog push you around or bump into you.

Vixen is good at this because she does it in cute, subtle ways. She puts her paws on me or nudges her face into my lap. She tries to sneak in between Ace and I and push him out of the way. Instead of giving her the attention she wants, I make sure to direct her back and not allow her to touch me. All I have to do is say “uh” or “no” and sometimes snap my fingers and she always backs off and sits or lies down. This is the behavior I want. When she is calm, she gets my praise.

If people would run their dogs for even a half-hour each day, so many behavioral issues would be totally gone. Vixen is not much of a runner, so I have been walking her with Ace and I every day no matter how cold it is. I see big changes in both dogs if I have slacked on their time for exercise. Ace is part lab and needs to run, period. Vixen is a strong, smart dog and can’t be kept pent-up all day. Walking or running is very important for them physically and mentally. No matter what a dog’s issues are, if she is tired, she will find less trouble.

Is your dog dominant? How do you deal with that?

If you are interested in adopting Vixen, send me an email at Lindsay@thatmutt.com. 02/20/09 update: Vixen was adopted last month.

36 thoughts on “How to lead a dominant dog”