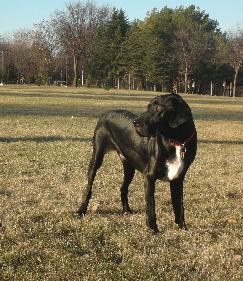 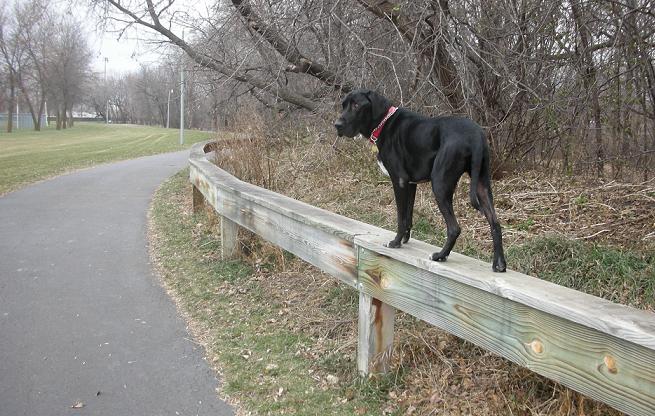 We have to remember dogs are dogs, and we love them because they are dogs. Don’t mistake your dog’s thoughts and emotions for human experiences. Dogs and cats are very simple minded.

We give our dogs way too much credit as far as intelligence. That goes right along with how we humanize our pets, thinking they understand our conversations or that they can connect two separate ideas. In most cases, they can’t.

My mutt Ace is easy to train, but that doesn’t mean he is smart as far as dogs go. His intelligence favors the great dane side of him (or whatever hound he is) rather than his lab side. Great danes and other hounds are not known for their intelligence. They are loving, gentle and affectionate.

Ace is eager to make me happy. He is a fast learner because he is easily conditioned to do a behavior I want, not because he is putting much thought into something. Above, he is showing off his balancing skills at Elmwood Park in West Fargo. Ever since he learned to do the dogwalk at dog agility, he has loved walking across beams.

A smarter dog is often harder to train because he will consider his options, challenge his owner or learn that obeying is optional. Someone who gives up on training her dog might say her dog is dumb or stubborn. In reality her dog is probably pretty smart as far as dogs go.

I just had to share these examples to prove how smart my dog is:

1. Ace can’t figure out how to turn a stick vertically to fit it through a gate.

Ace will stand there and try again and again to fit a three-foot long stick through a small entryway. Instead of turning his head so the stick fits vertically, he will continue to hold it horizontally, getting the stick caught on the sides every time. He never wants to abandon the stick, so he will continue trying this for a long time until I help him.

2. Ace sees me throw a ball in one direction, then he looks for it in the opposite direction.

Ace depends on smell. When he watches me throw a ball, he chases after it. If he can’t smell it or find it right away, he turns and runs 20 or 30 feet in the opposite direction to look for the ball even though five seconds earlier he saw me throw it the other way. He can’t make the connection that if he saw the ball go in one direction, it should still be over there even though he can’t find it immediately.

3. Ace gets simple commands mixed up.

Even though Ace knows commands like “bang,” “crawl” and “roll over,” he still gets them confused. Sure, he’s “smart” because he knows these commands. But how dumb do you have to be to confuse three simple words? I know I need to work with him more to clear up the confusion, but still.

4. Ace watches me hide a ball on a playground, but he’ll look for it somewhere else.

I play the “find it” game with my dog. He sits and stays while I hide an object somewhere on the playground. He stares at me and watches the general area of where I put the object. I return to him in a direct path, no zig-zagging. When I release Ace and tell him to “find it,” he runs all over the place looking for that object.

He circles the playground by about 20 feet out, making sure to also check the grass around the playground in a huge circumference. I know he depends on scent, and he is trying to pick up a whiff, but this mutt is truly searching for the object far beyond the playground even though seconds earlier he watched me hide it under a slide or on a swing. Once he finds it he is so proud of himself!

5. Ace needs to be told to go to the bathroom.

I trained my dog to pee when I say “Hurry up.” But I unintentionally trained him to stand outside and wait for me to tell him what to do. For more than a year, I lived in an apartment with Ace and had to take him out on a leash to go to the bathroom. Now that we have a backyard I’d like to be able to open the door and have my dog go on his own. Instead, he stands there staring back at me and waits until I say “Hurry up!” It doesn’t matter if I walk away or stand there quietly, he waits for his command. This dog has been on Prednisone for the last few months and has to pee all the time. When I tell him “hurry up,” he races from the door and pees for a long, long time. If I don’t tell him anything, he holds it and will even try to come back in if I open the door.

And here’s how smart cats are:

I like to mess with my food-obsessed cat Beamer by making him figure out how to get food from different containers. For example, I feed him from a DogPause bowl. Around Christmas I fed Beamer by putting his food in a shoebox so he had to open the lid in order to eat. Even though he ate from that box for about eight days in a row, he never figured out all he had to do was lift the lid. Instead, every time he ate he spent about 20 minutes pushing that box around until he bumped the lid accidentally with his nose and got the lid off.

Instead of putting two and two together and thinking, “Hey, if I bump the lid like this it comes off,” he only knew that if he randomly pushed the box around long enough, it would open.

How smart are your pets?

ha, yeah I am not sure either. Smart or not, she sure sounds cute! My grandparents' dog used to walk around the TV looking for the dog. Pretty funny.

My goldendoodle loves to watch Animal Planet with me. She sits a foot from the front of the TV and watches every move the dogs on the screen make. When they "Walk" off the edge of the screen, she will go around to the side of the TV looking for them. Not sure what level of intellegence that would demonstrate! This dog also loves to play hide and seek in the house with my husband. My husband hides and she seeks him out. Quite comical.

Yeah they do pick up on a lot more than we give them credit for. In general we don't understand our pets well enough. We expect them to understand things they can't possibly grasp. Yet, we don't realize they pick up on our subtle actions and feelings.

Well my dog can go eather way some days. Like she can go wild when she thinks that their is somthing outside when nothing is there, but when I am working on a paper for hours she will snuggle up to me. Then watches how I wright but when 2 horrs exactly struck she will nuge me and whine, lay on top of my pincil and notebook, then will paw at the remotes just to watch TV with me. For some reason she likes to see the Discovery chanil and watch cops and robbers. But I think that dogs have a willing for what they like, and understand things a little bit more then we give them credit for.

Hi Adam. Yeah I have never considered pugs to be too intelligent either. Your dog sounds like she has a lot figured out!