The average dog owner does not seem to be aware of what exactly this test is or why a dog should take the Canine Good Citizen test.

I only know about the CGC test because of my involvement with local dog training clubs.

The Canine Good Citizen program tests whether or not a dog is under control in various real-life situations.

In all honesty, the test is kind of a joke because most of the dogs (like Cosmo) practice for the test at the same place they end up taking the test. That doesn’t exactly test whether or not a dog is under control in a “public” situation.

But you know what? Most skills tests (for dogs or humans) are flawed in this way. There are definitely unfair advantages.

Still, I like the basic idea behind the CGC test. The goal is for the dog and owner to work together, practicing real-life scenarios.

The elements of the test are concepts every dog owner should be working towards, regardless of whether or not she cares about actually taking the test or obtaining a certificate from the AKC if the dog passes.

Since foster dog Cosmo and I have been working hard on the CGC components for the last couple of months, I thought I’d explain exactly what is tested during the CGC test so you can think about your own dog and where you are at with him.

The CGC test includes 10 elements. The dog typically takes the test with his owner. If the dog fails the test, he is welcome to try again another time.

What does a dog have to do to pass the Canine Good Citizen test?

1. The dog must accept a friendly stranger.

During this part of the test, the dog must remain relatively calm when meeting a new person. The dog may be sitting or standing at his owner’s side while an evaluator – the “friendly stranger” – approaches and says hello. The friendly stranger won’t pay any attention to the dog at this point, and the dog is expected to remain where he is without jumping at the stranger, barking, growling or wiggling around.

2. The dog must sit or stand politely while the friendly stranger pets him.

This is the part of the test where a lot of dogs get extra excited! The friendly stranger now asks if she can pet the dog! The dog must remain relatively calm while he is talked to and patted on the head and body.

3. The dog must sit or stand nicely for grooming.

At this part of the test, the evaluator will pet the dog some more, brush the dog, lift each of the dog’s front paws and touch each of his ears. The owner can talk to the dog and offer encouragement, but she can’t block the dog from biting or force him to hold still.

4. The dog must walk on a loose leash, not necessarily in a formal “heel” position.

This demonstrates that the dog will walk nicely without pulling on the leash. If the leash is tight, the dog does not pass. The owner can talk to the dog and tap her leg for encouragement. The walk will include a left turn, a right turn, two “halts” and a 180-degree “about turn” to the right.

5. The dog must remain under control while walking through a crowd.

Again, the leash must remain loose. The dog can show some casual interest in the people who make up the crowd, but he can’t jump on anyone, bark or growl.

6. The dog must sit, lie down and stay on command.

These are pretty self-explanatory. The owner can give more than one command, but she can’t force the dog into a sit or a down. The dog can’t follow her after she tells him to stay.

7. The dog must come when called.

Again, a pretty easy concept. The dog does not need to come and sit in a formal “front” position. He simply needs to approach his owner when she calls him.

8. The dog must not act aggressively or overly excited around a new dog.

The dog and handler will cross paths with a “stranger and a dog.” Both will stop and shake hands while their dogs sit calmly at their sides. The dog does not pass if he pulls on the leash, growls or barges towards the other dog.

9. The dog must remain under control when presented with a distraction.

A distraction could be a sudden noise such as a chair being dropped or it could be someone pushing a stroller. The dog can show normal interest or surprise, but he shouldn’t pull on the leash, bark or freak out in any way.

10. The dog must remain calm when separated from his owner for three minutes.

This part of the test shows that the dog is able to remain calm and under control with someone else even if his owner steps away for a few minutes. The dog can walk around or watch for his owner, but the leash should remain loose. The dog shouldn’t cry, bark or show distress.

If a dog passes nine of the 10 elements, he is allowed to retake the element he did not pass.

Dogs can wear slip or “choke” collars or martingale collars, but they can’t wear prong or pinch collars, Haltis, Gentle Leaders or anti-pulling harnesses. And obviously no shock collars are allowed during the test. Dogs that are “good citizens” should be able to remain under control without these types of training tools.

Treats are not allowed during the test, either, but owners are encouraged to talk to their dogs and repeat commands as needed. It’s nothing like a formal obedience competition.

The cost of the test depends on where you take it. For us it was $10. It is another $8 to obtain an official certificate from the AKC if the dog passes. 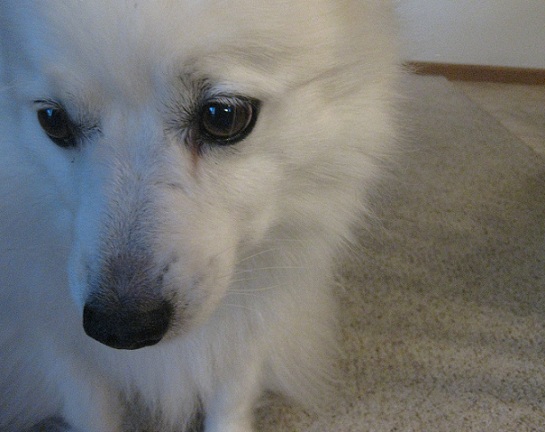 9 thoughts on “What is the Canine Good Citizen (CGC) test?”