As you know, my little foster dog Cosmo took his Canine Good Citizen test over the weekend.

Passing the CGC test shows that a dog will remain under control in various real-life situations.

“The CGC Program is designed to reward dogs who have good manners at home and in the community,” according to the American Kennel Club.

Well, we sure showed them!

The reason I wanted to make it a goal for Cosmo to pass the CGC test before getting adopted was because when he came to live with us he was not a good doggy citizen.

Cosmo was one of those rude little dogs in public situations and even at home. He used to growl at every person and dog we passed on walks. He used to bark at me, demanding treats. He would not obey basic commands without food motivation. He pulled on the leash so bad his Gentle Leader would hurt his muzzle and eyes. 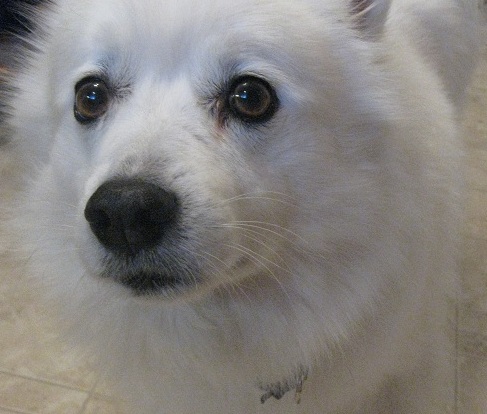 Obviously there is no such thing as a perfect dog, and Cosmo still has a long way to go. He is still aggressive about treats, but he is learning self control. I would never trust him 100 percent around kids. And like most dogs, he still pulls on the leash. A lot.

But little Cosmo has come a long way, and I am proud of him. He did better than most of the other dogs that showed up to take the test on Sunday. Most of the others did not pass because they could not sit still when the evaluator talked to them or touched them, or they could not keep all four paws on the ground when walking through a crowd.

Cosmo and I would like to share some tips to help other dog owners prepare for the Canine Good Citizen test.

How to help your dog pass the Canine Good Citizen test

1. Make sure your dog has had enough exercise leading up to the test.

I’m not saying you should run your dog to exhaustion, I’m just saying you should give your dog an adequate amount of exercise so he can remain calm and focused. The most common problem I saw on Sunday was a lot of pent-up energy in most of the dogs. They showed up practically trembling with anxiety and excitement, panting heavily.

The dogs would get excited and roll around on their backs when the evaluator tried to pet them. They would grab onto the leash and try to initiate a game of tug after completing a successful recall. All in all, they were having a great time! But they were not under control.

Cosmo and I went for a 45-minute walk before the test. This made a huge difference for him, and cut back on his pulling dramatically.

2. Talk to your dog throughout the test.

Dog owners are welcome to talk to their dogs as much as they need to during the CGC test. Cosmo can get a bit nervous when a new person is touching him. So while the evaluator was lifting his paws and looking at his ears, I talked to him the whole time. “Wow! What a good boy! She’s such a nice lady! You’re being so good, Cosmo! Good boy!” I was a bit over the top, and it worked.

During the loose-leash portion of the test, I also talked to Cosmo a lot and patted my leg. I knew a tense leash was an automatic fail, so I let him walk ahead of me a bit (quite a bit). All that matters for this portion is that the dog remains on a loose leash and generally stays near his owner.

3. Take an obedience class at a location that offers the test.

Cosmo and I took the CGC test at the Red River North Dog Obedience Club in Fargo. Prior to taking the test, we took two obedience classes at this location. Obviously this dramatically improved our chances of passing the test because Cosmo was comfortable in this environment. Some of the dogs had only been in the building a few times, and they were energized and excited about all the new people, new smells and new dogs!

4. Practice for the test around dogs and people your dog has never met.

Cosmo had a very hard time remaining focused and under control when we approached a new dog during the “reaction to another dog” portion of the test.

We actually failed this element, but if the dog passes nine of the 10 elements he is allowed to retake the part he failed. We somehow managed to pass during our second attempt while meeting a second new dog. Cosmo had trouble with this portion because he really wanted to lunge forward and greet the other dog.

When we practiced for this portion of the test, we practiced greeting dogs Cosmo had already met. This is no problem. What Cosmo does have a problem with is remaining calm when meeting new dogs. To better prepare for this, I should’ve been more consistent with making him sit every time we met a new dog in real life.

But you know what? With an old crab like him, I’m pretty happy if he wants to rush forward and greet another dog. At least he’s being friendly!

What are some additional tips to help a dog pass the Canine Good Citizen test?