Home » How to use Facebook to get more dogs adopted

Below are tips to help rescues and shelters use their Facebook fan pages more effectively in order to help more pets get adopted. If your shelter does not have a fan page, start one right now! I’m referring to public fan pages here, not closed groups or individual pages.

Three or four posts spread throughout the day (every day) seems to be the right number to keep people interacting without clogging up their feeds. People get irritated when they see too many posts from one organization.

At the same time, you want to make sure to post often enough so people notice your shelter. Nothing is more uninviting than a “dead” Facebook page.

The rescue below has not posted anything since Aug. 8. I took this screenshot on Aug. 28. The most recent post was about an event that occurred eight days earlier. Certainly the group has had something going on since then!

Seeing an inactive page tells me the rescue itself is inactive. 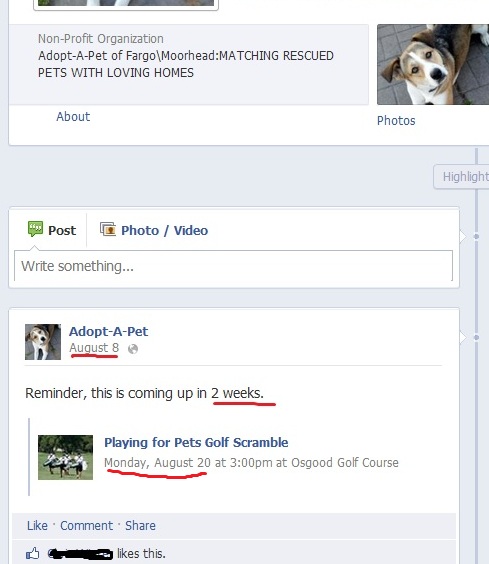 Facebook posts are “live” for an average of two hours. The posts don’t disappear from your page, but after a certain amount of time they will be covered up by clutter in people’s feeds.

If you post four posts in a row, all four will be “dead” within a short timeframe. However, if you spread the posts out over the day, each will stay “live” for a few hours, allowing more people to see them.

Try to vary the times of day (and night) you post, and don’t disappear on the weekends. You want to catch as many different people as possible.

It’s important to respond to your fans’ questions as promptly as you can, preferably within the hour but definitely in the same day. People use social media to get information instantly. The longer you wait to respond, the more time that person has to get a dog somewhere else.

Facebook allows you to customize the content and titles of each link you post. If you post a link without any editing, it will appear as is – often very long with a bunch of numbers. This looks unattractive and overwhelming. Instead, left click on the link and edit the title to say something short and to the point. You can also click on the summary of the link and edit that content. 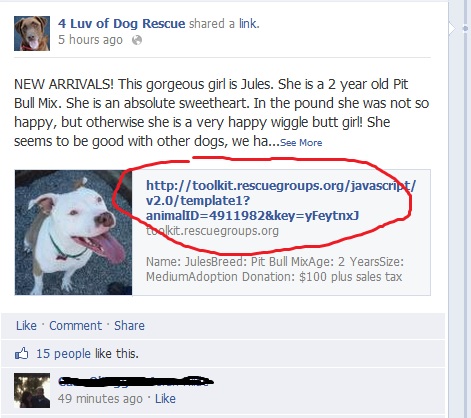 Assign a staff member or volunteer to manage the shelter’s Facebook page. Send that person a link to this post 🙂 You may need several volunteers to run the page, but I would keep it to about three people. When too many people are involved, somehow less work gets accomplished.

Rescues and shelters are known for having lousy customer service. So, if someone has a suggestion or negative feedback, use it as an opportunity to reach that person. Create a better relationship.

So someone had a bad experience attending one of your adoption days? Apologize. Ask how the rescue could do better. Don’t complain about how your shelter is run by volunteers and you are all overworked. That’s a poor excuse.

Most of these people are interacting on your page because they truly care. These are potential adopters, so don’t send them away for good just because you can’t handle criticism.

Of course, if the person is dropping F-bombs or threatening the shelter, it’s best to delete her comments. You may want to take a screenshot first to save for future reference. And don’t forget this goes two ways!

It’s really hard when someone jumps on your Facebook page and starts bashing pitbulls. Or maybe someone starts talking about how she wants to breed her Chihuahua.

Use these opportunities to find common ground and reach those people, even when it’s difficult. Share articles about how pitbulls are just like other dogs. Explain why someone should think twice before breeding her dog. Be polite and open and welcoming to all dog owners. If you tell them to leave, you’ve lost an opportunity. Check out this wonderful post on finding common ground.

Below is a thread where someone was spreading inaccurate information about pitbulls. Instead of deleting the comments, the rescue invited the person to come to an adoption event to meet some of the pitbulls.

People like to see dogs and cats being held or out playing. Try to get pictures of the dogs licking people’s faces or giving “hugs.” This shows that the animals are friendly and good with people. Potential adopters will begin to imagine themselves interacting with the dogs.

I got to attend a presentation by Kim Wolf of Animal Farm Foundation, and she stressed that pics of dogs in cages give off a vibe that the dogs must’ve done something bad. People will view them as unapproachable. After all, you couldn’t even take him out of the cage to get his picture!

If you post interesting questions, people will respond. This will drive more people to your page. The questions don’t even have to be directly related to adopting/saving animals. They could be anything about pets or current topics in your community.

Have you adopted a pet from our shelter? Why did you choose to adopt your pet?

Guess this dog’s breed! (show a pic of one of your shelter’s adoptable dogs)

Are we doing a good job serving our community?

Are you a dog-park person? Why or why not?

When I visited a certain shelter’s fan page, four of the four most recent posts were the same thing – a post asking people to vote for the shelter in an online contest.

I know these contests are important and shelters can win a lot of money from them, but certainly there must be other topics worth posting about. I can’t stand to visit this shelter’s page because it feels like the shelter is yelling at me. Earlier this summer I wanted to learn more about a special adoption event the shelter was having. When I went to its fan page to learn more, all I saw were these same types of contest promotions.

Don’t get lost in these.

If you do post about contests, keep it to once per day and at least change up the content each time. Good grief! 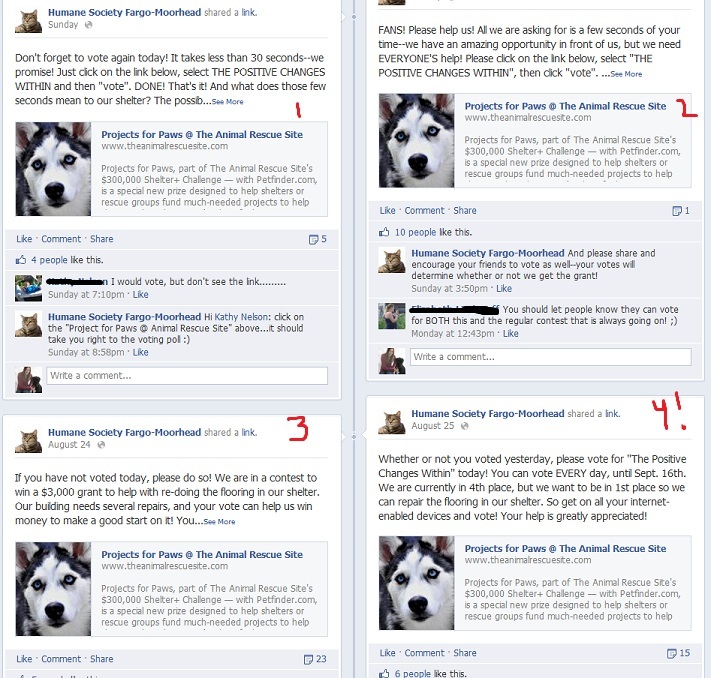 11. Encourage the public to choose a name for a pet.

Just got a new puppy or kitten at the shelter? Ask the public to suggest names. Choose the one that gets the most likes by the weekend.

12. Educate the public on common misunderstandings.

Many people have misunderstandings about shelter dogs in general. They might think they are all mixed breeds, pitbulls, old, sick or poorly behaved.

Teach people that your shelter gets a large variety of dogs, including puppies and purebreds. Show them that most of the dogs are under 2 years old and that most will be well behaved with basic training. Teach them that pitbulls are not any different than other dogs.

13. Promote other businesses that support your shelter.

Each week, give one business some type of special “award” by publicly acknowledging how that business has helped your shelter. Literally call it an award. Maybe a dentist donated money or maybe a college sent students over to volunteer, etc. Give them an “award” on Facebook!

Acknowledge these businesses, and they will certainly share the posts with their own customers. It makes them look good, right? And, it will encourage additional businesses to do the same.

14. Congratulate the community rather than place blame.

Don’t focus on the “irresponsible public.” Focus on the wonderful, compassionate individuals who make your shelter’s work possible. Post often about your awesome volunteers. Include pics of volunteers participating in adoption events, fundraisers and so on.

When you need help from the community members, ask them for help with specific needs. Give them suggestions on what items they can donate. 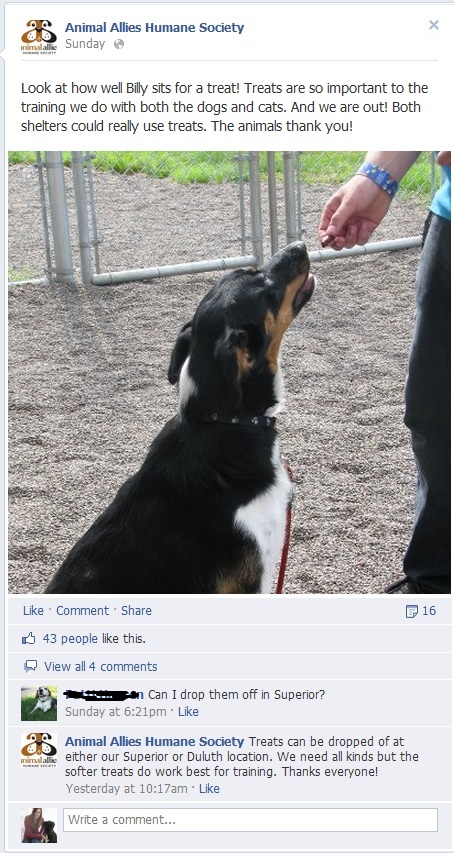 The adopters will be thrilled to be featured with their new pet. They will share it with everyone they know! People love uplifting stories, and it will encourage others to save a life, too.

Here’s a great example, but you’ll notice the rescue missed an opportunity as far as responding to a person’s question. She asked a question on Sunday, and when I copied this two days later, no one had responded! Oops! 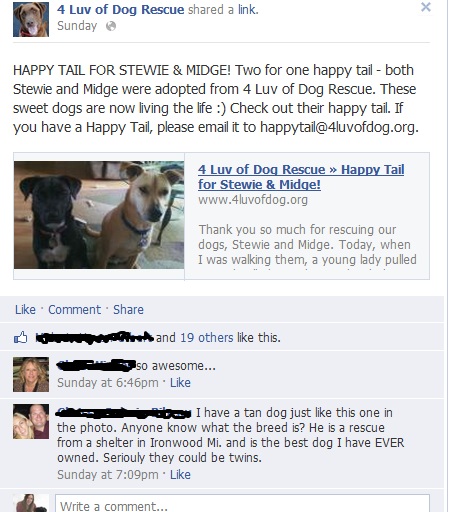 What tips do you have for using Facebook to get more dogs adopted?

Our rescue used to have a FB group of 700 members. Once the pages were introduced we deleted the group and started all over with a page. I make sure to update it 3-4 times a day with events that are happening, who got adopted, and who is new to the rescue. We also use the banner to share the Dog of the Week. We now have 3300+ likes and can hardly keep up with the adoption applications.

Fantastic post! #7 is my favorite. I don't think people understand that when you say something negative, you are turning people away instead of bringing them to you.

Yes, sometimes it is hard, but it is better to hear them out and either solve the problem or find common ground.