I’ve caught myself spreading myths about pitbull dogs such as “They can be really nice dogs. It’s how they’re raised.”

This myth implies that a pitbull raised without love, training or exercise will become a “bad dog.” But just like any type of dog, pitbulls can turn out to be very nice dogs even without these things. We’ve all known or read about dogs removed from unfortunate situations that went on to live normal lives in loving homes.

Raising a dog with love, structure and kindness may increase his chances of becoming a “good dog.” But that is the case with every type of dog, not just pitbull dogs.

When I say “pitbull” I am referring to a wide variety of purebred and mixed-breed dogs, not a specific breed.

Common pitbull myths and stereotypes spread by rescues and shelters 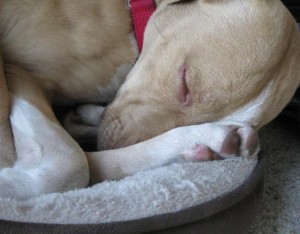 The following are several pitbull myths that are too often reinforced by shelters and rescue groups. These are the groups that should be advocating the most for these dogs. They should not be spreading inaccurate information.

I’m guessing that at some point, each of you have reinforced one of these stereotypes without meaning any harm. Words matter very much. Out of our love for pitbulls and all dogs, let’s try to be more conscious of our choices.

“There are so many ‘unwanted’ pitbulls in shelters.”

This is the myth I hear the most, that shelters are “full” of “unwanted” pitbulls.

Let’s not call them unwanted. This is a negative stereotype that might cause potential adopters to avoid the pitbulls. It implies there is something different about them. Pitbulls are not “unwanted.” They are one of the most popular types of dogs in the United States. People love pitbulls, and they want to adopt them.

Sometimes breed specific legislation targets pitbull dogs, making it difficult for their families to keep them, according to Animal Farm Foundation, an organization dedicated to securing equal treatment and opportunity for pitbull dogs. This is not a reflection on the dogs themselves but on poor legislation.

“Pitbulls will do anything to please” or “She has that classic, pitbull personality.”

The term “pitbull” is a label that stretches across several breeds and breed mixes, but even within a specific breed, every dog is unique.

Sure, some traits are common to groups of dogs. Beagles howl. Aussies herd. Labs retrieve. But these are single traits that do not make up the entire personalities of the individual dogs. Plenty of Labs won’t fetch a thing.

“There are so many bad pitbull owners out there.”

AFF is working hard to break this stereotype with its “I am the majority” project. The goal is to show how the majority of pitbull owners are good, ordinary people doing ordinary things. We don’t hear about these owners because good owners don’t make the news.

“Pitbulls should be adopted by someone who has experience with the ‘breed.'”

This implies that pitbulls are somehow different from other dogs. It also rules out a large percentage of potential adopters.

Breed specific legislation does not work on a political level, and it certainly doesn’t work on the adoption level, said Kim Wolf in a presentation “Turbocharging pitbull adoptions” at the 2012 No-Kill Conference.

Shelters should not place additional adoption criteria on pitbull adopters such as higher fees or mandatory training classes, she said. It’s unfair, and it’s preventing pitbulls from going home.

“His ears are cropped, so he was probably a fighting dog.”

If a dog’s ears are cropped, it tells you nothing about his behavior or history, said Wolf in her presentation. It does not mean the dog was a fighting dog or a protection dog. People have their dogs’ ears cropped for all kinds of reasons, usually for health reasons or to make a fashion statement. Don’t make assumptions.

“A pitbull with scars was probably abused.”

Most pitbulls have never been abused. They live in loving homes, and they’ve never seen a fighting ring.

If a pitbull dog or any dog has scars on her face, it does not mean she was a “bait” dog, said Wolf in her presentation. A dog could have scars for a variety of reasons, often from just being clumsy!

“The general public can’t be trusted with pitbulls.”

“Pitbulls are the most abused dogs on the planet.”

Yes, some pitbulls are abused (just like all types of dogs), but this is rare. Most pitbulls are happy dogs living the good life. They are far from “abused.” Using a blanket statement for an entire group of dogs makes them sound unappealing to potential adopters.

“They were bred for fighting.”

Historically, some purebred American Pit Bull Terriers (APBTs) were bred for fighting, according to AFF’s web site. But they were also bred to be family dogs and farm help. It’s unfair to assume a dog will behave a certain way based solely on the label we give her. Instead, look at the dog in front of you and observe how she acts.

“To look at the APBT through the narrow scope of dog fighting is to miss out on their long and positive history in our country as cherished companions,” according to AFF.

“Pitbulls can be great dogs in the right hands.”

This is another way of saying “It’s how they are raised” or “It’s the owners, not the dogs.”

What are some other pitbull myths you’ve heard?

Pictured are two of my past foster dogs – Levi (top) and Vixen. 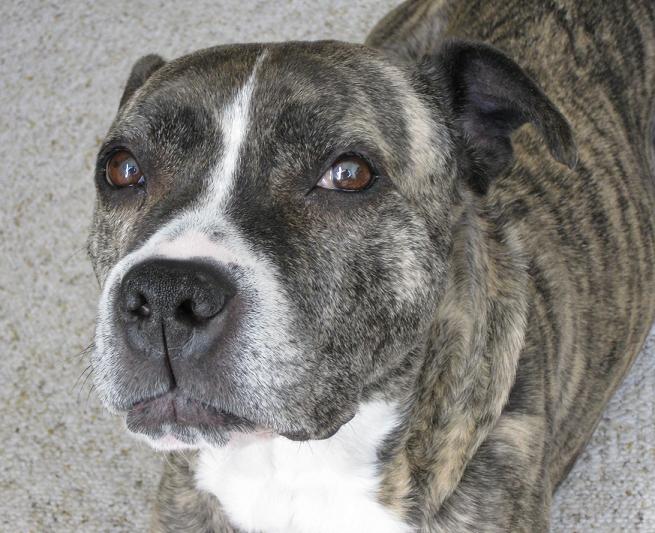