Have any of your dogs peed on the Christmas tree yet this year? Ace has!

Over Thanksgiving, my husband’s uncle took the time to go out and cut down a live tree for us.

We had it on its side by the car, and I took Ace outside without a leash, assuming I would be able to call him away from the tree if needed.

Well, that was a stupid assumption. My dog went over to sniff that tree and instantly lifted his leg on it!

Oh, Ace. I mean, it was outside and everything. How was he supposed to know? 🙂

I asked a few other dog lovers to share their funny holiday stories. Below are their stories, in their own words. Even better if a few of you want to add yours in the comments!

Kathryn Clappison and her dog Modie: 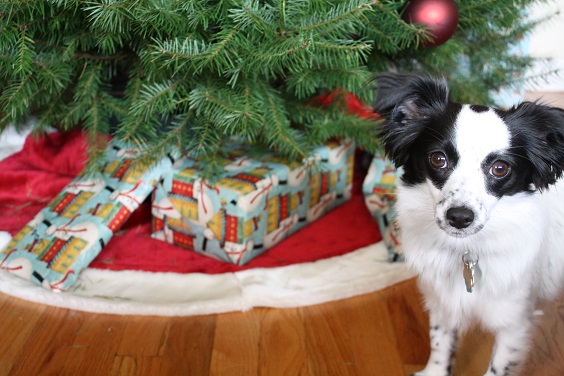 My boyfriend and I were looking for our Christmas tree at a tree farm up in the mountains when our little dog’s leash malfunctioned and she came unclipped.

She took off running like I had never seen her run before, weaving around the Christmas trees and having the time of her life.

Once she was satisfied, she came running back to me and we got her back on the leash. As we attempted to load our 7-foot Douglas fir into a small Honda Civic – I don’t know what we were thinking – she came loose again and starting zooming around the parking lot.

We were able to get both our dog and our tree in the car safely that day, but it made for quite a memorable experience.

(Modie is pictured with the tree.) 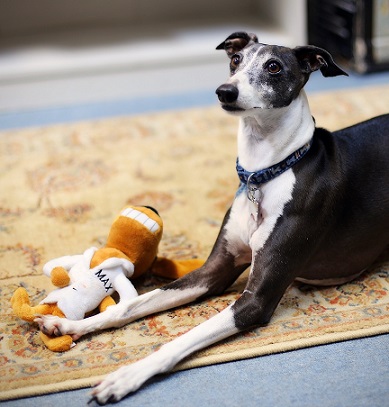 Last year, we set out a freshly cooked apple pie to cool while we opened presents.

We thought both dogs had been with us the entire time, but when we walked back into the kitchen, we found that our Italian greyhound Enzo had climbed onto the counter and eaten the middle out of the pie.

The worst part is that it’s a longtime family recipe that my mom makes every year for an uncle, and he looks forward to that pie all year.

We had to tell him that afternoon that the dog had eaten his pie!

Angela Farrell and her dachshund Philip:

As a new puppy and addition to our family, my future husband and I were very enthusiastic about showing Philip the dachshund the newly decorated Christmas tree.

We had sweet visions of him curling up in front of the fire as the tree’s lights twinkled.

But he had different ideas. 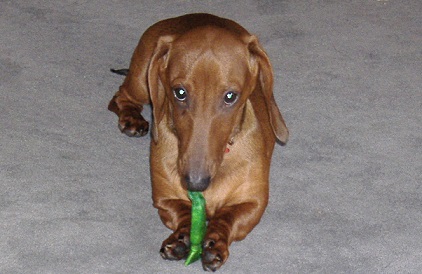 When we opened the door, he ran to the tree, picked up his leg and peed all over it.

Anthony Filomena and his Labrador Max: 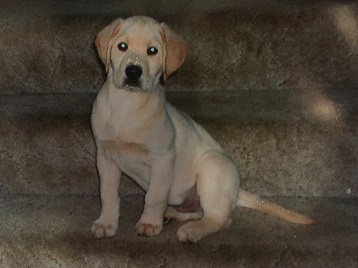 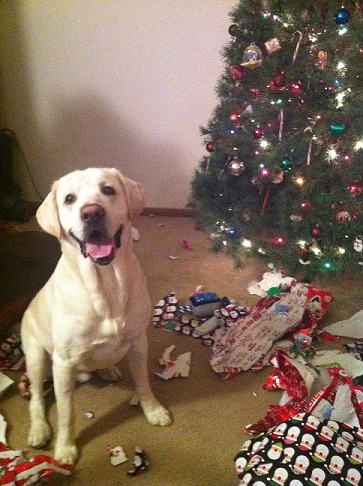 Back in Christmas of 2004, it was Christmas Eve and I was 13 and beyond frustrated with parents whom I had begged for at least the two years prior to get a dog for me for Christmas.

After they told me it was not going to happen for the second year in a row, I went to bed extremely early while we had family and guests over because I was very stubborn.

The next morning when they all wanted to get up, around 6 a.m., I remember staying in bed and still pouting that if I didn’t have one I wasn’t coming. The next thing I knew my two aunts and cousin had walked into my room, saying come downstairs.

It was extremely weird for them to be over so early on Christmas morning, and to my surprise, as I go downstairs, there he was! Eight-week-old, purebred yellow Labrador puppy – I soon named him Max! It was seriously the best surprise of my life.

I remember a few days later and the next year or two we had to be extremely careful around Christmas time as he would eat all of the ornaments off the tree, pee on the tree, and he would always open up people’s presents under the Christmas tree!

OK, how about the rest of you? What stories do you have?

Don’t forget to sign up for my email updates here. You’ll hear from me about twice a month.