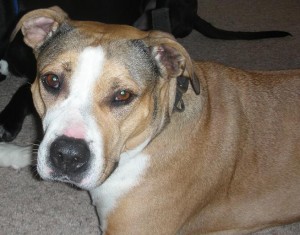 I decided to foster a senior dog in November. I wanted an older dog, one that wouldn’t require too much exercise and could be left alone when I went to work. I chose an 8-year-old Staffordshire terrier (pitbull) named Ginger. She was sweet, got along fine with my mutt and tolerated my cat.

She seemed like the perfect foster dog at first. I drove her home from the shelter and she sat calmly in the back seat of my car. She was calm in the apartment and walked just fine on a leash. I took her and my mutt on a long walk together to tire them both out and so they could get to know each other a little. We had a nice walk and even passed some other dogs with no problems.

All was well until I came home and put Ginger in a large, plastic VariKennel while I took a five-minute shower. I couldn’t believe it. When I came out, she was running around loose in my apartment, and the kennel appeared to be untouched. I put her back in the kennel and took my mutt outside for literally two minutes. When I came back, she had busted out again. It appeared she had literally bent the kennel door by pulling it in towards her and then slipped through, because the door remained shut and locked with Ginger on the outside!

I own two kennels, the VariKennel and also a wire one with bars. So I tried her in the other kennel and left for work. Bad idea. When I came home, she had busted out of the kennel by bending the bars and sliding through. The strength of this dog was impressive. Then she proceeded to scratch at my bedroom door, stripping the wood panel off the side. The poor dog had gone into panic mode and I realized she could not be left alone. When kenneled again, she freaked out, threw herself against the bars, and frantically tried to dig and push her way out. I had to stay home from work just so I could be home with her and save my apartment from being destroyed.

Needless to say, poor Ginger went back to the shelter the next day. Within two hours of staying in a Varikennel at the shelter, Ginger ripped the door off the kennel, chewed on the door to the room she was in and cut her own mouth.

Poor thing. She had simply never been kept in a kennel before and was under high stress from being at the shelter in a new, confusing environment. She could not escape out of the concrete-and-bars cage at the shelter (think jail cell), so that is where she had to stay. This is where dogs stay until they find a foster home or forever home. Lucky for Ginger, a family adopted her within days.

I felt bad that my first attempt to foster a dog failed. But it made me realize a few things. First of all, it made me appreciate my own mutt and his good behavior. It made me realize that all my training and time spent with him had paid off. I learned that I can’t put any dog before myself. Having Ginger required me to stay home from work and put off other daily routine tasks like going to the gym, buying groceries and even doing laundry because I simply could not leave her alone. Having two dogs is three times the responsibility of one and before I ever get another dog of my own or a foster dog, I will have to do more research to make sure I find the right match. I also know now that I do not have the time to offer a good home to a second dog.

For now, it will just be my cat, my mutt and I. I’m sure we’ll eventually adopt or foster another animal, but for now it’s just us.

[...] after today (only the 2nd day) I feel like I will never be able to unclench again.I guess I’m not the only one, just wish I could figure out what lesson I’m supposed to learn from this [...]