This is Sophie’s blogging debut (pictured below). Sophie is now 2 years old, but look at her as a puppy. There are not many dogs cuter than a springer spaniel puppy. She belongs to my parents, and Ace and I visited her last weekend. Ace and Sophie have a great time whenever they are together.

English springer spaniels are very friendly, affectionate dogs. They were bred in England during the 1800s to hunt game, mostly birds, according to the Encyclopedia of Dog Breeds by D. Caroline Coile. They were useful for flushing birds, or getting them to “spring” out of the grass and brush. In my opinion, the name springer fits the breed because of its endless energy, playfulness and bounciness. A springer without enough exercise is like a 6-year-old on a sugar high. And their tails never quit wagging.

Springers weigh between 40 and 50 pounds, which makes them a nice, medium-sized dog. They are white with either black or liver markings or tricolored. Their tails are docked to meet AKC standards. If their fur is not trimmed, their coats grow to be long and flowing.

2. These dogs are easy to train. They succeed in obedience trials, agility and hunting.

3. Springer spaniels love everyone. They are always happy. The continuous tail wagging will bring a smile to anyone’s face. Even when they are being scolded, the tail wags as if to say, “But you forgive me, right?” They are playful and affectionate and get along great with kids and other pets.

4. They are a manageable size. At about 45 pounds, most people will be able to lift a springer. They are not as big and powerful as many of the other sporting dogs.

5. Springers make good watchdogs. They aren’t big barkers, but because of their alertness, they will warn their owners of approaching strangers or animals.

1. Their endless energy will get annoying if they don’t get enough exercise. Springers need more than an hour of physical and mental exercise every day or they will get bored. Obedience training, a long daily walk and a big yard will pay off big time if you own a springer.

2. Their coats will require brushing, and they will also need trimming every two to three months or so. The breed also sheds.

4. A springer’s tracking and flushing instincts are enough to drive a person nuts on a walk. Without proper training and leadership, a springer won’t know when to quit and can easily become fixated on squirrels, rabbits and birds.

5. Although springers make good watchdogs, they are also likely to make friends with any stranger. There is not an aggressive bone in a springer’s body. 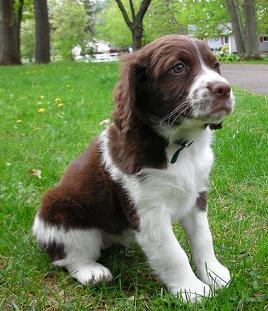