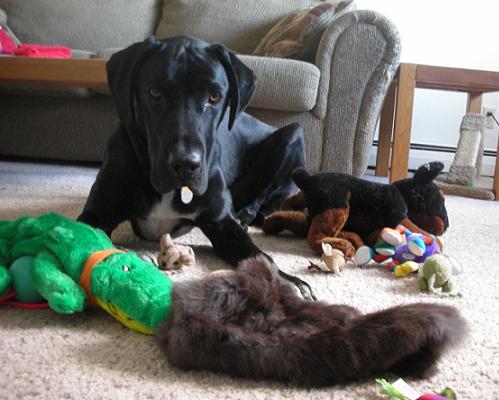 Ace and I just got back from a two-day trip to visit family where Ace had the freedom to run in a big yard. The problem with that is it was harder to control him when he wasn’t on a leash. Sometimes he brought me sticks, totally fixated on them. All the toys were put away, and he still obsessively wanted to play fetch with anything. Of course, I didn’t throw the sticks.

One of the biggest challenges for me is dealing with everyone else, not just my dog. For example, most people (friends and family included) think I’m really strange for not allowing my dog to play fetch whenever he wants. He’s a retriever, they say, and he can’t be changed. That might be true, but I don’t believe it. And I am the one who has to live with a ball-obsessed dog, so I am going to at least try to fix this problem. I think part of the reason Ace’s first owner got rid of him was because of his annoying obsession with toys. But she didn’t tell me that when I adopted him!

Anyway, Ace got to run and run and run for two days, so he is good and tired. I got out a pile of his toys when we got home – balls, stuffed animals, bones, etc., and put them in a pile on the floor. He looked at me, like, “this has gotta be a trick.” Just the fact that he made eye contact with me with toys involved is a huge step for Ace. I’m hoping that if the toys are out all the time, they won’t be such a big deal. If he wants to play normally by himself with the toys, then that is fine. When he brings a toy to me and becomes even slightly fixated, that is when I will correct him by making him lie on his side.

I’ve written before that dogs with one obsession often have several obsessions. One of Ace’s other obsessions is water. He used to drink all his water immediately and would not allow any water left in a bowl. What I did to solve this was always keep his water bowl completely full at all times. Whenever he drank, I filled it up right away. He learned it was not necessary to drink it all. There will always be more water, and no one is trying to take it from him.

By keeping Ace’s toys out, I am hoping for a similar reaction. I will give him praise every time I notice him ignoring his toys, making eye contact with me or lying calmly next to a toy. We’ll see how this goes.

My Border Collie, Colby, is the same way. She will throw anything at us to try to entice us to throw. And then she BARKS and BARKS and BARKS. She seems equally fixated on all toys, but tennis balls are her absolute favorite. Fetch is not just a game for her. I just found your blog and am going to attempt to follow your advice and steps to break her obsessive behavior. When you put all of Ace's toy's out, did you also put out the balls?

I have a mcnab pup at 8 months, he a great retriever I he will even get a ping pong ball without crushing it. This was all great and fun for a bit but than it started to become all he thought about he is an addict. I've been treating it like Any Adiction I'm trying to wiene him off slowly and replace it with other fun stuff but he just loves it so much. If I don't through something for him he will cry and get really anxious and scratch the ground. So I don't really know what to do. Anytime we go to the beach he just hunts for a stick. I think he really needs a job so I am trying to figure something Out to replace the problem.

It is very frustrating, isn't it, Salinda? One thing I would definitely do is teach a "leave it" command. Ace knows leave it, which I've taught him to mean "don't touch." When we are at the dog park and he brings me a ball, I will take it, set it near me as a way to "claim it" and then I say in an almost angry voice to make sure I'm getting through to him, "Leave it!" He will often just attempt to sit there and fixate on it without touching it, so then I try to distract him with something else or grab him by the collar and walk away. He has gotten a lot better, but I used to go to the dog park during quiet hours so I could work on this with him without other people around as it's kind of embarassing :)

You can do other things such as refusing to throw the ball until Maggie gives you eye contact. You can either teach her a command for this such as watch or simply wait her out (could take 20 mins or so if she's as obsessed as my dog) and mark the eye contact with "Yes!" or "Good!" and throw the ball. You can slowly work with her so she has to hold eye contact longer before you throw the ball.

I also took Ace to a Frisbee class last month (I know, crazy to bring a retrieving obsessed dog to a Frisbee class, right?) But he actually did really well. If he fixated on one disc, the trainer just grabbed a second disc and moved it around to get his attention. It helped keep him from fixating on any one disc.

I wish you the best of luck! Be patient and let me know if you come up with something that works well. Believe me, I could use some suggestions too!

Maggie, my 2 yr old 68 lb bulldog, is a ball freak. She will only chase the ball she first slobbered on. We threw 5 balls together and she hunted hers out. She tries to drink water with it in her mouth. She does not lose interest and gets very intense about her ball, the one she started with. She is only interested in it where fetch is possible. Stick, ball, rag, anything goes. She is in fantastic shape and will take the ball to everyone in the dog park to get them to throw it. I have to remove her from the park to stop her. HELP! Tried your great ideas but she is a BULLDOG.

*grin* Our dogs have their own toy box...a basket of toys and bones. Sometimes Trooper will drag out every single bone. It's hilarious to watch him systematically dig through all the toys to get every bone out. LOL :) I don't think any of our dogs are obsessed with any of their toys. Not that I've noticed so far anyway. We'll see about our newest addition - I pick him up in less than two hours!!!