Home » A home for all rescue dogs

In 2007 a pitbull mix waited at a high-kill gassing shelter in the state of Georgia. She was fortunate enough to be rescued and transported to Fargo, N.D., but spent two years living in boarding facilities.

This is the story of Georgia, a “lucky” dog who now sleeps under the covers every night in a warm bed.

Georgia is a dog who taught me and many others a thing or two about what it means to rescue dogs. Although she is just one dog, Georgia’s story is in some ways the story of all rescue dogs – those that find homes, those that do not, and those that continue to wait.

Pulled from a high-kill shelter 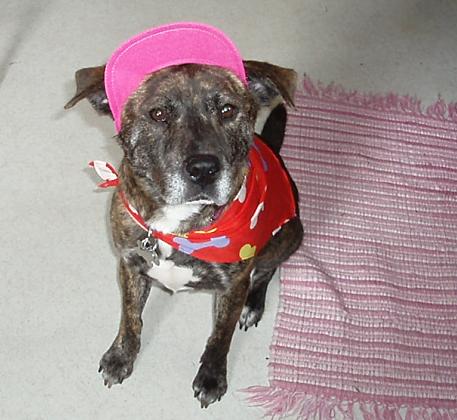 Kish Hilmert, founder of 4 Luv of Dog Rescue in Fargo, was on an email list in 2007 that focused on saving southern dogs from gassing shelters. She had originally responded to a post about a small dog from the same shelter as Georgia.

“When I called, that dog had been rescued, but the volunteer begged me to take Georgia,” she said.

Kish debated over rescuing Georgia, a pit mix who would take a lot of time and money to get transported to Fargo. At the time, Kish was helping rescue dogs with money from her own pocket.

“Her pound picture was terrible. Her head was hung so low that you could not see her face, just her back,” Kish said of Georgia.

She decided to give the dog a chance.

Georgia later tested positive for heartworm. But Kish said once she and 4 Luv of Dog Rescue agree to help a dog, it becomes their responsibility to do everything possible by providing medical care, providing emotional care and never giving up on that dog.

Ask Andree Hayes why it took Georgia so long to find a permanent home and she will say “Because she was meant to be our dog!”

“She is our best friend that we love to spend time with,” Andree said.

Georgia can be found lounging on the couch, napping near windows and sleeping in her owners’ bed at night. In the mornings, Georgia is always eager to start a new day and gets pushy if “Mom and Dad” try to sleep in.

“She sighs with annoyance and kicks the snooze-pusher,” Andree said. 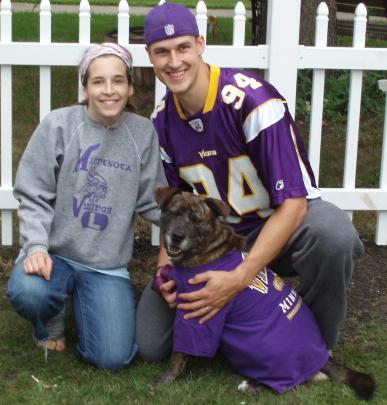 The couple chose to foster Georgia in July 2009. She was their first foster dog. Their initial impressions of their future dog weren’t exactly ideal – she was a little hyper at the kennel and even ripped Phil’s pants, Andree said.

Still, they brought Georgia home that day, assuming she would be a long-term foster dog.

“We didn’t know how we felt, but it sure felt right driving her home,” Andree said. “Phil put his arm around me in the front seat, and Georgia stuck her head underneath his arm from the back seat as if to show she was already part of our family.”

Georgia would be the couple’s first dog together. Phil had never owned a dog before, and Andree grew up with her family’s cocker spaniel mix, Licorice.

In December 2009, Andree and Phil began thinking of actually adopting Georgia. Although Andree said she thought eventually someone might want the dog, no one had looked at Georgia during adoption events.

“Then I thought how sad I would be without her, and how I would feel like I gave up on her by letting someone else adopt her,” she said. “She was and is truly a perfect dog, so how could we do any better than that?”

Life in the kennel 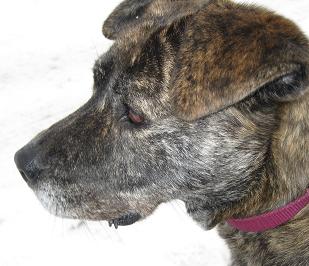 Although Georgia went without a foster home for the majority of two years, she did receive special attention from rescue volunteers and kennel staff during that time. She got to go on walks and attended training classes. I took her running several times.

Two years is a long time for an animal that on average might live to be 10 or 11. But every time I took Georgia out for a run, she was making the best of what she had. She was always optimistic and living in the moment as animals do best.

Like me, many rescue volunteers got to know Georgia well.

“She didn’t let kennel life get her down,” said Tina, foster coordinator with 4 Luv of Dog. “Georgia is a nice dog – she loves people – she was just given a bad break by having a prior owner who obviously did not properly train or socialize her with other animals.”

Georgia’s new owners are very aware of their dog’s nature and said they don’t allow her in situations that would jeopardize her or anyone’s safety.

Is there someone out there for every rescue dog?

I believe that most of life’s events happen by coincidence, but if Georgia has taught me one thing, it’s never give up. There just might be someone out there for every dog.

“Sometimes it just takes a while to find the right match,” Tina said. “Some dogs require more effort on the part of their owners.”

[quote_center]”I often think of her in her home and sleeping on the couch or getting her beloved belly rubs and it makes me sooo happy.”[/quote_center]

Kish also said she believes there is a home out there for every dog, and seeing a dog like Georgia go into a loving home means a lot.

“When I heard her fosters were adopting her, I did tear up,” she said. “I often think of her in her home and sleeping on the couch or getting her beloved belly rubs and it makes me sooo happy. She deserves a loving home that appreciates her.”

There is always debate on whether it’s right for shelters or rescues to eventually kill some animals. 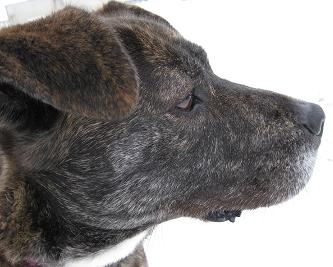 PETA and the HSUS stand by the argument that killing “less adoptable dogs” is at times better in the long run because this opens up more resources and space for other animals. It is also possible for dogs to literally go crazy from long-term confinement, so some believe it’s more humane to end dogs’ lives.

In my opinion, the fact that so many dogs are killed each year when there are dog lovers in every community willing to help is a complete shame and failure.

When people criticize 4 Luv of Dog for taking in certain dogs, Kish said she encourages them to get involved with animal rescue and to focus more time and energy to helping animals.

Often, the public does not have a clear idea of what animal rescue entails, she said. Dogs give us humans so much love, loyalty and companionship, and they deserve our love and dedication.

“The dogs in the pounds can not speak for themselves,” Kish said. “They can not tell us how wonderful they are, how hard their lives have been, and how much they deserve to live, so that is why it is so important to me to help these dogs.”

Tina also believes it is worth all the time, money and effort to save all dogs because they deserve better. After all, it’s not the dog’s fault if he ends up in the pound or happens to have behavioral issues.

“Dogs grow and become a by-product of how they were raised and what their owners taught them,” Tina said. “Dogs are not born mean, aggressive or fearful – they become this way due to the environment in which they are raised.”

Tina said she believes most behavioral issues can be corrected. It just might take a lot of work, and not all people are willing to put in the time and effort many dogs require.

Now that Georgia is in their lives, Andree said she and her husband are a whole lot happier. They often prefer to stay home with their dog these days rather than go out with friends. They used to wash their hands every two minutes when they were around Georgia, but now they embrace her licking and her “dog germs.”

Andree said all dogs deserve a chance, and she strongly encourages people to adopt a rescue dog or to consider fostering a dog “because you just might fall in love!”

I adore your blog & agree that every rescue dog should have a home. I am an animal rescuer in Mississippi, and I fight every day to try to do just that for these rescue babies. Thank you for all that you do. If I can ever help you with anything, please let me know! Also, I just started my own rescue blog, and would love for you to check it out if you ever have time!

You have a great blog as well, just checked it out. I have an obsession with rescuing dogs and cats and doing all I can for them. I've fostered dogs, and it is one of the most rewarding things a true dog lover can do. Cats need foster homes as well. I wish more people would foster cats.

This is truly a wonderful and informative article. Who is to say whether a dog should be put down or not? I would say that the dogs spirit and resilience even in tough times speaks for itself. The bottom line there is a home for the rescue dogs as you state. But, the way to achieve this is also spay/neuter and I believe licensing for pit breeding and limitations on that. The sad story is that there are sooo many beautiful, fun pits in the shelters that it is difficult to keep up with all of them. And, because there are many people out there breeding them for a buck, something must be done. Banning pits is like witch hunting. People need to be educated that they are- except for a very small percentage that HAVE been abused- great FAMILY PETS! Instead of governments instilling fear into people by banning the breed, outreaches and promotion of pits that service dogs etc. should be emphasized! Thank you loving people who adopted Georgia! You are beautiful.

Georgia is a sweet girl, and I'm so happy she has her forever home. She is doing well and has been there about a year now! Checked out your rescue site. I hope all those pups get into good homes.

Georgia certainly deserves her knew home. I wonder how Matty is doing as well.

I'm so glad I found this great article on Georgia and her new family. I volunteered with 4 Luv of Dog when Georgia and Matty were "newbies". I knew Georgia was adopted, but didn't know who her new family was. Now I know and I'm crying while I read it. Georgia, you found home at last. You big sweetie! Thanks a million to her new family and I mean that ;) Kiss to you Georgia, good girl.

Now if I could just read a story about Matty and his new family.....

Thanks so much for your comment! I'm so glad it was a happy ending for Georgia.