Why does my dog always scratch his collar?

Dogs will purposely scratch themselves around the collar area in order to avoid doing something else. At first I thought this was something annoying my dog did, but lately I’ve noticed the behavior when observing other people and their dogs.

This scratching behavior happens a lot during dog obedience classes. If a dog does not feel like doing a command, he will instead scratch himself for a few seconds while the owner stands there patiently waiting for the dog to stop scratching.

This puts the dog in control.

The owner is unintentionally communicating to the dog – go ahead, take your time. You don’t have to do what I say until you feel like it. The dog is usually dominant or high-energy and the owner is not assertive enough.

But submissive dogs will also scratch themselves in order to avoid doing something else.

My mutt Ace is a submissive dog, and he will scratch himself around the collar in order to avoid doing something he’s uncomfortable with. My cats like to mess with him by cornering him in a certain area. If I call Ace to me, he might whine for a second but then he scratches himself in order to avoid walking by the cats. My dog definitely does not have an itch every time my cats corner him 🙂 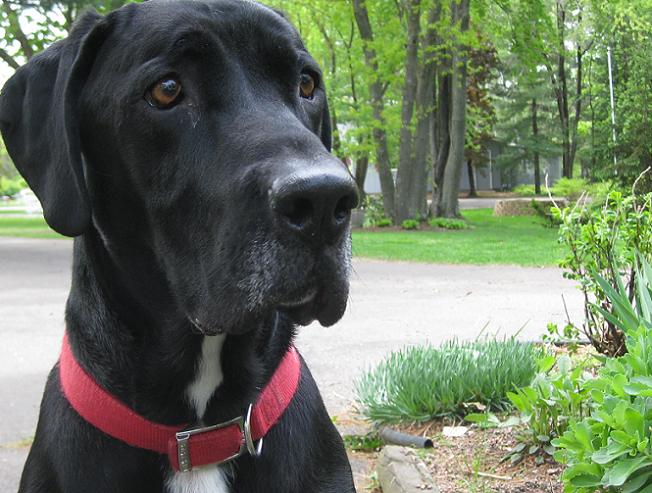 Ace’s scratching is often followed by him shaking off his entire body as though he just jumped out of a lake. That shaking behavior is like letting out a huge sigh of relief (glad I made it by those mean cats!).

Dogs “shake off” all the time after greeting one another, ending a play session or even after being scolded. The shaking behavior is kind of like a re-set button. It’s a signal that the dog is moving on to something else.

I’ve noticed that if I leave Ace in a stay position long enough, eventually he will scratch himself, shake his entire body and then walk off as though I’d never given him the stay command. I don’t know if he is aware he’s doing this or if he truly has forgotten about the stay command by this point. I’m pretty sure he’s purposely doing it because if something “exciting” is happening and I put him in a sit-stay, he will start scratching almost immediately and then try to get up.

Some dogs will scratch themselves when they are interacting with other dogs to show that they are not a threat. It’s like the dog is saying “I’m busy minding my own business.” This is also followed by the dog shaking his whole body and then walking up to or away from the other dog in a relaxed or playful manner.

You may have noticed your dog pretending to smell the grass when really he is keeping an eye on the other dog. This is another way of communicating that he is not threatening. It’s a good way to trick the other dog into coming over to investigate and then get him to play a game of chase!

This scratching behavior is not so odd when you think about how humans pretend to groom themselves or act interested in something else during uncomfortable situations. I know I play with my hair or look at my nails or pretend to read a text message when I’m trying to avoid eye contact or avoid answering a question.

Cats do a similar action by pretending to be heavily involved in licking themselves after you call them or tell them to do something. My cat Scout does this every time I call his name. I’ll say, “Come here, Scout!” and he immediately licks himself for a few seconds then slowly takes a few steps towards me, stops and licks himself again and then a minute or two later casually walks up to me as though he intended to come to me on his own.

If Scout tries to jump up onto a shelf but falls, he will immediately start licking himself or scratching himself as though nobody saw him wipe out. Hmm, pretty sure that’s what I do too when I trip or slip. I immediately focus my attention on something else as though nothing happened 🙂

Do you notice your dog scratching himself in order to avoid something else?

I realize that sometimes the dog actually does have an itch or he may have fleas, other bug bites or a skin condition.

My newfiedoodle does this as well as shaking just his head , in a "no" motion when he doesn't want to do something we tell him to.

How do we stop this behavior?

Lindsay - thanks for the reply. I do the same. When I take Billy's collar off, it's really interesting that he seems to scratch less. I would be able to feel him and hear him on the bed, yet it does seem like with collar off - lots of less noise and scratching! One thing I still have a problem with is his gnawing on the base of his tail. I think this is anxiety or boredom, not so much an actual itch. When I catch him he stops and won't go back to it. If I don't stop him he makes that area so wet that I can't have him on furniture. I had him on Calmiclome (however it's spelled) for awhile but he did it back then, too. Not sure what to do about it. Vet says his skin and coat are fine.

That's interesting! Thanks for your comment. My dog seems to scratch for attention, too. He also shakes his whole body. I have to take his collar off him at night or I don't get any sleep, and he doesn't even sleep in my bedroom. With his collar on, I can hear him scratching from pretty much anywhere in the house!

I think my dog does it to get my attention because he knows it makes lots of noise. When he is in his space, I never hear the scratching. If I go into the kitchen or if I am working on my laptop, he will sometimes sit about 5 feet away and start going to town. Because it DOES get my attention, he continues to do it.

When I take the collar off he doesn't do it nearly as much. It's a thin chain collar so the collar itself isn't the cause of the "itch".

Ha! Yep, I know what you mean!