Do dogs lean on us out of dominance?

Then there were a few people who jumped in preaching Cesar-Millan talk, saying that a dog that leans on you is trying to assert his dominance. And of course this created all kinds of drama as people became overly emotional and defensive about “dominance theory.”

Here’s the thing: Sometimes dogs do use their bodies to claim space or to get to an object first or to simply be in the lead. Call it dominance. Call it cute. Call it whatever you want. It’s what dogs do.

Nine times out of 10, when dogs lean on us they really are just seeking attention. They like to be close to people. And yes, sometimes it’s rude.

Why dogs lean on us 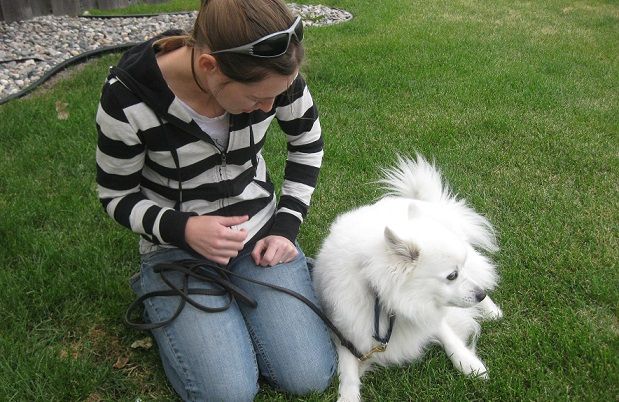 My dogs Ace will come up and slam his side into my legs, wiggling his body into a U shape and whipping his tail every which way.

I always bend down and give him a good butt scratch. “Good boy, Ace!”

But there are dog owners who don’t read into anything their dogs are telling them. Everything the dog does is cute or funny to them, even when the dog is trying to communicate something. To them, a dog that leans couldn’t possibly be trying to say anything other than “I love you.”

In order to understand our dogs, we need to pay more attention to what they are trying to communicate during each specific situation.

Dogs can certainly block us with their bodies in order to gain access to what they want, but they will also lean on us in order to feel safe.

Here are some examples of when an insecure dog might lean on his owner:

1. Shy dogs will often lean on their owners in order to feel safe

My former foster dog Cosmo was a leaner.

He would lean on me when someone came to the door or when we attended an adoption event. This wasn’t because he was trying to dominate me. He was leaning on me in order to feel more secure.

Poor Cosmo was always stressed at adoption events. His ears would be back. He would avoid direct eye contact with people. He would pant with an open mouth. Usually one front paw would be raised and tucked up into his chest. Sometimes he trembled. Sometimes he even growled at people.

No wonder no one was very interested in him during these events!

I made sure not to give Cosmo affection when he leaned on me for security. Telling him “It’s OK. It’s OK. Good boy,” would only teach him to continue looking to me for security. In order to help him grow as an individual and build his confidence, I had to teach him not to depend on me so much.

So I would block Cosmo with my hip or my elbow (I was usually sitting on the floor with him). Or I would simply move away or up into a chair. He would usually shift back in order to lean on me again, and I would move away again as well. When he was relaxed and lying next to me without touching, I would pet him calmly.

I know, I know. Some of you are thinking, “But affection does not reinforce a dog’s fears.” That is true. And I’m not saying you should correct a fearful dog. Just look for ways to block some habits in order to slowly help the dog move on and grow.

See my post: Does affection reward a fearful dog?

Treats and favorite toys can also be very useful to help distract an insecure dog from everything going on. You can use treats to get him to think about something else like sit or stay and build his confidence that way. Sometimes I would make Cosmo lie down and stay a foot away. Then he would get the treat as a reward for maintaining distance. “Wow, what a good boy! So brave!”

2. Some dogs climb into their owners’ laps in order to feel more secure

Some little dogs will climb into their owners’ laps in order to feel more secure. Big dogs try this as well, but it’s usually the smaller dogs that tremble in their owners’ arms because they fear something in the environment.

Instead, the owner should place the dog on the ground and slowly help him understand that nothing bad happens in new situations. The owner should ignore the dog or move away when he frantically paws at her legs to get back up. She should give him a treat or pick him up only when he is calm or if the situation is truly unsafe for the little guy.

And of course, it’s important not to completely overwhelm the dog. If he’s fearful of new people and dogs it would be unfair to set him on the ground in the middle of a PetSmart or a street fair. But the owner should seek out less “scary” situations first and slowly challenge the dog more and more from there. 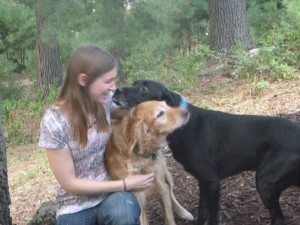 Some dogs will even become possessive of their owners, growling and biting from their owners’ arms if anyone gets too close. Of course they are going to be possessive. They don’t want to be removed from their “power source.”

But even these dogs are not barking out of dominance. They are barking up a storm because they are insecure. They are acting defensively.

So how can an owner fix this problem?

The same way as above. Seek out situations that are not too overwhelming, and keep the dog on the ground. Carrying him around will not help him build confidence.

Most little guys will immediately try to jump back into their owners’ arms – their place of empowerment.

The owner should not allow this, not unless the dog is truly in danger.

If the dog tries to jump back into his owner’s lap, she should block him with her arm. If he makes it into her lap, she should stand and push him off or set him on the ground. If he starts growling and barking at people from her feet, she should put his leash on him and tether him away from her. She should reward him when he’s calm and not barking or crying.

The goal is to help the dog grow as an individual by weaning him away from his dependence on his owner.

See my post: How to stop my dog from guarding me. 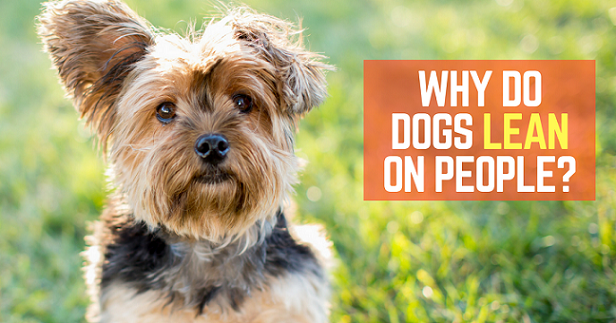 3. Some dogs will hide between their owners’ legs at the dog park

When dogs hide between their owners’ legs at the dog park, many owners respond by petting the dog or talking to the dog.

Instead, it’s best to just step away. Keep moving. Don’t allow the dog to hide behind you or under you. Help the dog build his confidence by decreasing his dependence on you.

If the dog seems overly shy or fearful, just walk away from the other dogs, re-group and return again after a few seconds. You don’t want to overwhelm your dog too much by forcing him to interact right off the bat. Visit the dog park during quieter hours and don’t plan on staying for long. If he plays for a few seconds and then seems overwhelmed, just quit while you are ahead. At least he played for a few seconds. That is a success.

What have you noticed about your dog when he leans on you?

Is he usually seeking attention? Power? Security? Probably all of the above, depending on the situation. Let us know in the comments!