Forty-four percent of the impounded cats in my community were killed in 2010, according to the pound statistics for our three local pounds located in Fargo (N.D.), West Fargo (N.D.) and Moorhead (Minn.).

That’s 446 cats killed for no reason.

It’s a number I can’t get out of my head.

The cats here have needed some major help for a long time, and finally there is some hope: CATS Cradle Shelter.

CATS Cradle is a temporary home for roughly 35 cats and kittens up for adoption in Fargo.

I got to tour CATS Cradle and meet many of the cats up for adoption such as Bob, Smokie, Denzel, Mike, Murray, Star and many others. The adoptable cats are listed through Petfinder on the shelter’s Facebook page here. There are cats of every color, age, size and personality.

The shelter provides a relaxing environment for the cats with large windows, scratching posts, cat beds, blankets, shelves to climb on and tunnels to hide in. The shelter is “community style” meaning five to 10 cats live together in an open room. The cats do not live in kennels. Instead, they are free to wander around. As you can see, they seem pretty stress free.

It can go a long way when potential adopters get to see the cats in a real environment rather than in cages. At CATS Cradle, the cats get to interact with people and with each other, moving around, stretching, napping, playing, crawling into your lap. 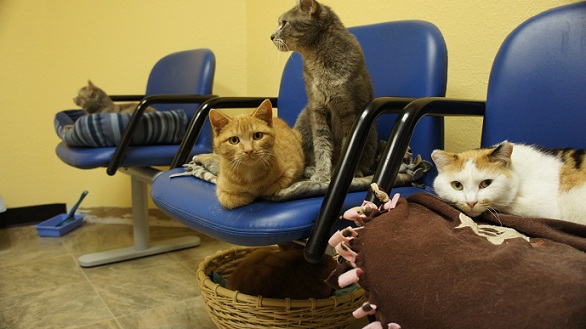 When I knelt down with my camera, many of the cats wanted to come and see what I was up to. Most did not appear frightened. Instead they were playful and curious, putting their little noses right up to the lens or pawing at the zippers on my coat.

This sweet black cat was constantly invading my personal bubble. I was tempted to take this cat home 🙂 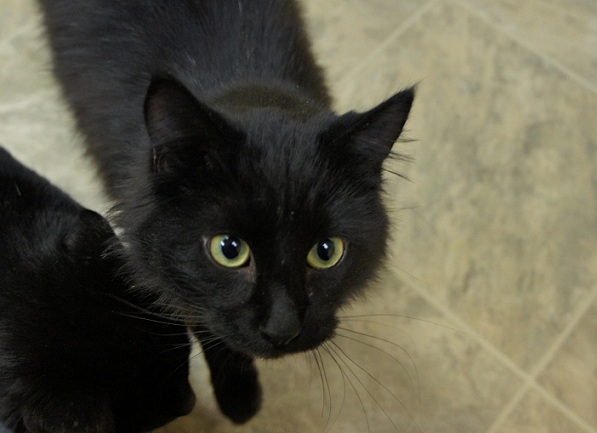 CATS Cradle is a voice for the cats, said Gail Ventzke, one of five shelter directors. People tend to value cats less than dogs, she said. Although cat owners will call the pounds looking for their lost cats, they often decide not to pay the required fees to get them back.

At the Fargo pound, the cost to recover an impounded cat is $35 plus a boarding fee for each day the cat is impounded, according to the city’s web site. There is also a $25 penalty fee if the animal is unlicensed. If a cat is not claimed by her owner within three business days she will be released to an adoption agency (depending on space) or killed.

In Moorhead, the first-time impound fee is $30, according to the city’s web site. There is also a $50 fee for an unlicensed cat, and a $16.03 boarding fee for each day the cat is impounded. Cats are given at least five business days to be claimed by an owner or taken in by an adoption agency before they may be killed.

The majority of the cats that come to CATS Cradle are rescued directly from the Moorhead pound, according to Ventzke. CATS Cradle is also contacted by individuals attempting to surrender their cats, but the shelter typically tries to help these people re-home the cats themselves.

How to adopt one of the cats

If you would like to adopt a cat from CATS Cradle, stop by the shelter to meet your potential new family member.

You will be asked to fill out an application form (it’s only one page!) and pay an adoption donation fee of $90. If you rent, you will need permission from your landlord to have a cat. There is always a three-week trial period to help you determine if you and the cat are a good match.

When you adopt an adult cat from CATS Cradle, the cat will already by spayed/neutered, de-wormed, vaccinated, microchipped and tested for FeLV/FIV, Ventzke said.

For kittens, the $90 adoption donation fee includes all of the above if age appropriate, according to the shelter’s Facebook page. Costs of routine first-year vaccinations as well as microchipping and spaying/neutering are also covered if services are through the Minn-Kota PAAWS Clinic in Fargo. If the procedures are done elsewhere, they are at the adopter’s expense.

In the short time I was at the shelter, at least two adoptions were in the works. One white cat named Cotton was possibly going to her new home with a young woman. A young couple was interested in a little white and gray tabby named Evlyn. Another couple was in to meet the kittens.

How to volunteer with or donate to CATS Cradle

If you are interested in volunteering with or making a monetary donation to CATS Cradle, stop by and visit the shelter between 4 and 7 p.m. Tuesdays or 10 a.m. and 4 p.m. Saturdays. It is located at 9 Ninth St. S. in Fargo. Appointments are also available. The shelter’s web site will be up and running soon, but for now you can also find more information on the shelter’s Facebook page or by calling 701.356.7877.

Volunteers are always needed to help with cleaning and socializing the cats, Ventzke said.

CATS Cradle has organized “scooping shifts” and an impressive schedule for feeding, watering, changing bedding and cleaning the floors and walls.

The shelter is as clean as a building with 35+ cats can be with no smell of cat urine. I did notice when someone had just used a litter box, but with 30 or more cats, that is understandable!

As you can see, the lobby is clean, open and inviting. So are each of the cat rooms. 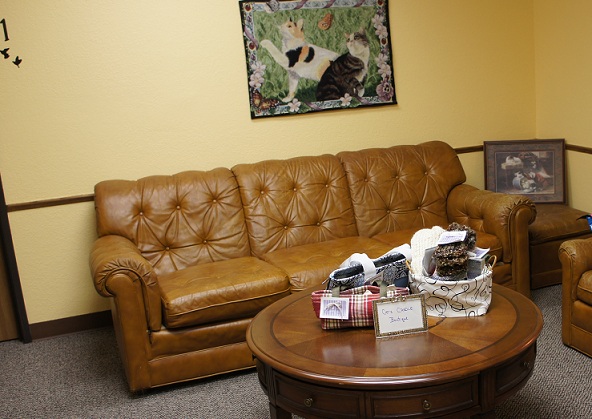 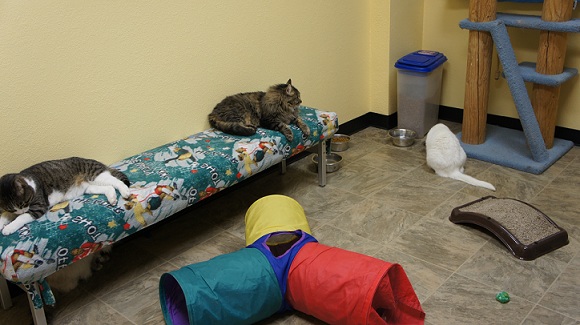 Meet the cats for adoption!

Below are just a few of the wonderful cats up for adoption at CATS Cradle, but you can see them all by visiting the shelter or checking out its Facebook page at Facebook.com/CATSCradleShelter.

Smokie was one of the first cats I met at the shelter. He seems like a really laid-back guy and had no problem with a stranger petting him or holding a camera in his face. He’s a large cat, and I hear he likes to be talked to but doesn’t like to be held just yet.

Smokie was rescued along with a colony of other cats, according to his Petfinder profile. He seems to enjoy the company of other cats and likes snuggling with his roommates. He’s also tolerant of the younger cats who always want to play.

Look how handsome he is! 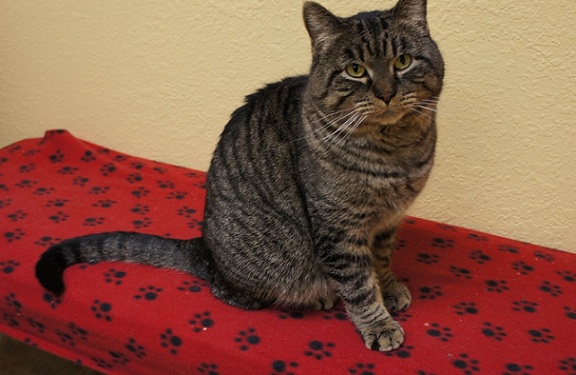 Murray is one of the cats in Smokie’s room. If you look closely you can see that his eyes are different colors. One is a lighter shade of yellow than the other. The shelter volunteers believe he might be hard of hearing since he doesn’t respond to certain sounds.

Murray was definitely friendly and eager to meet me. He was the first cat to greet me at the shelter, and he made a good impression! 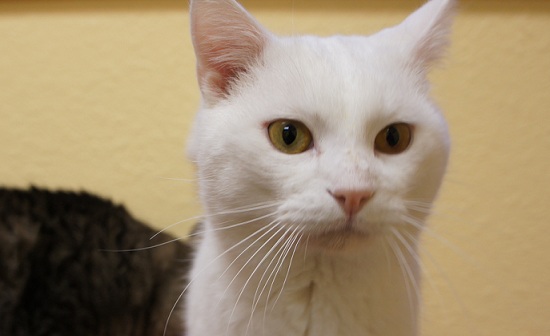 And here are a few of the other cats I met. This gray cat shares a room with Smokie and Murray. 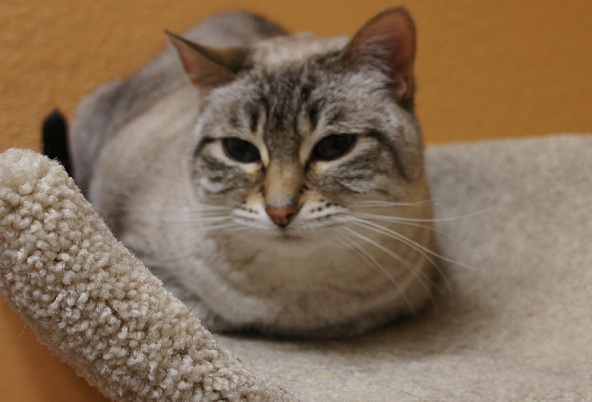 And this little one is one of several kittens – all friendly, playful and ridiculously adorable. They were running around wrestling, pouncing and scratching, and they seem well socialized. They didn’t mind when I picked them up and cradled them. 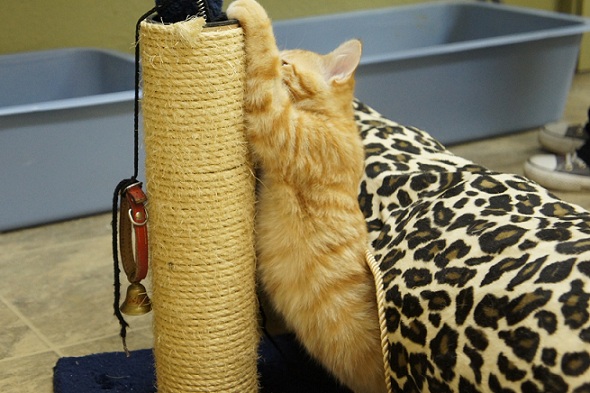 I hope you are able to visit CATS Cradle and meet some of these great cats! I am very excited about this new shelter, because it’s going to make a huge difference for the cats in our community.

No matter where you live, are you thinking about adopting a cat anytime soon?

Just wanted to let you know that Cotton went to her trial home later that week and Evelyn went to her trial home this past Monday. Cotton is doing fine, but the resident cats in the home are going to need a little time to adjust to having her around, she is fine with them, but they however, feel a little intruded upon. Since Cotton lived in our shelter in a colony, she is very open to being around other cats and it is of course the "resident" pets that will need the adjustment. Evelyn is doing wonderfully in her trial home, no issues at all, she absolutely LOVES her two canine brothers and wants to play with them all the time, no adjustment issues there and the family has fallen deeply in love with her. We also had 3 more applications the night you were in, all three of those went to their trial homes later that week and are all doing wonderful. We will keep in contact with all of our potential homes throughout the trial period to make sure that if there are any questions or concerns we address them immediately.

I am very happy that you got to come in and see us in action so you could see the process unfold in real time. It always gives you a better idea of how an organization works to see them actually conducting their business rather than just sitting down and telling you how it's done. Stop by again any time, we would love to see you again :)

Thanks so much for those updates! I loved visiting the shelter, and I will be back to visit again sometime! Keep up the good work!

I think this is a place I need to look into volunteering this spring!

Very cute cats. I hope they all find homes soon! We would definitely consider getting one, but one of our dogs chases them. He wouldn't get along!

I hope they all find homes soon as well!