Home » A message to Ninja – a voice for ownerless cats

I like to believe I rescued you. I’m only human, after all. The thought of “rescuing” something makes me feel good.

But I know you rescued yourself, weeks before I showed up.

At some point in your young life, you learned to talk back when people spoke to you, to tolerate being held, to seek affection.

And so, Ninja, the pound workers allowed you to stay a bit longer.

The “holding period” for impounded cats there is five business days. You got to stay for more than three weeks. 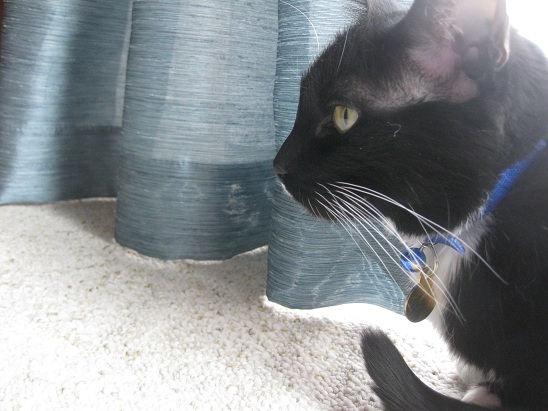 Perhaps it was your kitten-like frame, your loud purr or your friendliness to other cats and dogs at the pound.

Or because you learned to look people in the eyes.

When no owner came for you, the employees at the pound wanted a no-kill rescue group to take you in and give you a second chance. 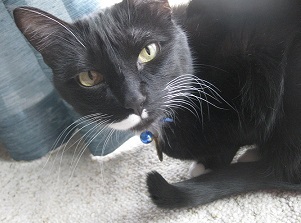 You got your second chance.

When I went to pick you up, I was happy to see you were a black cat. Don’t tell Scout and Beamer, but black cats are my favorites.

When I first saw you, Ninja, you were curled up in your litter box because it was the only soft spot in your cage.

When I brought you home, the first thing you did was roll around in the litter box I gave you. Was this to claim the new box as your own? Was it a habit you picked up at the pound? I thought about naming you Pig Pen, but thankfully you only did this one time.

You didn’t do that, Ninja.

Instead, you crawled under the comforter of the bed and remained there, burrowed, for three days. You came out only to eat or use your box.

When my cats came into the room, you were drawn to them even though they didn’t accept you right away.

When I said your new name, you talked back.

I know you probably don’t think about your past, but as a human, I have to make up your story. That’s what we do.

Were you lost? Were you abandoned? Were you born to a feral or stray mother? How many nights did you sleep outside last winter? Was someone looking for you?

I know it doesn’t matter. And if you could tell me your story, you would.

You always have a lot to say.

But now you have a good home in Wisconsin. Who woulda thought?

For most of 28 years I tried to get my mom to adopt a cat. She never would.

Not until she met you.

Now you can watch eagles and squirrels from the large windows. You hold your own against a springer and a golden. You live with two people who built you a scratching post with their own supplies and tools from their garage.

You had a present under the tree at Christmas, and my mom drove you 180 miles (one way) just so you could stay with me during their vacation rather than home alone or at a kennel.

You are quite the cat, Ninja.

One of the lucky ones.

This post is dedicated to the 439 cats who were killed in the Fargo, West Fargo and Moorhead pounds in 2011. Impounded cats are kept for at least three to five business days so owners have a chance to reclaim them. But many of these cats are ownerless – abandoned, stray or feral – and therefore have no chance of being reclaimed.

Please support no-kill cat rescues and shelters in your region as well as the trap-neuter-release of feral cats.

I love cats, there hasn't been a time in my life when I didn't have one. About feral cats. We had several feral cats living in and around our house while I was growing up. My grandfather also loved cats. When we were younger he built us a play house attached to the garage. He added a flap at the bottom of the door to allow these non human loving and less than trusting creatures to have have a warm place to stay in cold and wet weather. They quickly learned there were soft blankets, food on a daily basis they were adapting to the lifestyle quickly as long as humans were not in plain sight. There was one that was quite young along with having a different appearance.He seemed mellow - almost approachable. It was love at first belly scratch for the wild cat and my grandmother. One day he followed her into the "real house" there he remained his entire life..My grandmother named him Puss. We had Puss for nearly 20 years. He was amazing very talkative, gentle loved to be brushed , he loved my grandmother, he even allowed the dogs to share a lap. My grandmother had yip yappy Pekenese and Pomerainians.They knew their place. Puss was in complete control. This was one cat that never felt intimidated, you knew when he gave you that sideways look, he meant business.....

Awww. Thanks for sharing your story about Puss. What a character! That is so nice that your grandfather built a shelter for all those feral cats.

One of my very favorite posts! I'm glad you introduced us to Ninja. And now she's ours. Who would have thought?

She is a very lucky/spoiled/happy cat!

This is such a lovely post! My part of the world is struggling with a very large cat overpopulation problem. There just aren't enough rescues or shelters to take in the massive amounts of stray cats abandoned by their owners. It's heartbreaking, especially since these cats have no status or protection under the law. The government refuses to step in and help and the cats keep dying. I've been thinking of how to bring awareness to this tragic problem and of how to help increase the value of cats in our society. This post is a lovely start.

Thank you for giving Ninja the perfect home.

Trap/neuter/release is the most important thing to do for feral cats. They should not be entering shelters because they can survive just fine in the wild, and they don't cause any problems. Most are afraid of people and should not be adopted out into homes. The government would save money over time through t/n/r because within a few years the cat population would be greatly diminished. Simply catching them and killing them does not do anything to decrease their population because the ones that are not caught keep on reproducing.

It's a sad situation for the cats.

What a beautiful post and touching tribute to Ninja as well as the many cats who found themselves not quite solucky. The numbers you cite are staggering and hurt my heart.

Thank you for bringing attention to the reality of homeless cats.