I want to share the 2012 pound statistics I gathered from the three local pounds in my community of Fargo, N.D., West Fargo, N.D., and Moorhead, Minn.

I also want to share some of my thoughts on the stats.

Although most people who will read this do not live in my area, I want to encourage you to contact your local pounds and shelters and ask them what their numbers are. How many animals did they take in last year? How many were adopted? How many were killed?

How our pound system works

These pounds are not shelters. Dogs and cats are held for a minimum of three to five business days to give owners a chance to reclaim them and pay the required fees. If the animals are not claimed or if fees are not paid, the pounds will release them to local rescue groups or shelters. Animals not claimed or placed can be killed, even if they are healthy and friendly.

* The statistics were gathered directly from the pounds. These stats are available to the public. More detailed statistics are listed below, or follow this link for a pdf version: 2012 Pound Statistics -Moorhead, Fargo, West Fargo

Here are some key points I want to highlight, as well as my thoughts: 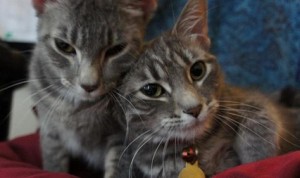 – Local rescue groups do an amazing job pulling dogs and cats from the pounds, and the community could be considered no kill if you are going by numbers alone.

– To be considered a no-kill community, one of the factors is that the community must save at least 90 percent of its impounded animals, according to the No Kill Advocacy Center, a group dedicated to achieving a no-kill nation.

– Moorhead/Fargo/West Fargo had a combined live release rate of 92 percent in 2012, according to the pound stats.

– One hundred percent of the impounded cats labeled as either feral or aggressive were killed in 2012, according to the pound stats. That ended up being 73 cats between the three pounds.

– Our area has a low-cost spay/neuter organization called Minn-Kota PAAWS. The group focuses on pets from limited income households as well as barn and feral cats.

– The City of Fargo works with PAAWS to trap/neuter/release feral cats, according to Carol Sawicki, clinic director of PAAWS

– The City pays PAAWS $20 for every cat it traps (up to 150 cats per year), according to Sawicki. She estimated PAAWS trapped about 70 cats in 2012. About 25 of those were unadoptable feral cats that were released after they had been vaccinated and sterilized. The rest were put up for adoption

– In 2012, only two healthy, adoptable cats were killed in our local pounds. Both were at the Fargo pound.

– Our community continues to be a relatively safe place to enter the pound system if you are a dog.

– Clearly there is not a “pet overpopulation” problem in our area. Yes, certain communities do face challenges, and pounds and shelters do not have it easy anywhere. But that does not mean we have “overpopulation.” It means we need to remain creative. It means shelters and rescues need to do their fair share of marketing the animals

– I’m hoping the leadership within our local rescue groups will begin to realize that pet overpopulation is a myth, and always has been.

– If a community’s pounds killed just two adoptable cats and zero adoptable dogs in 2012, how is there “overpopulation”?

– If a community has enough demand for breeders and a pet shop (Pets R Inn at West Acres Mall) to sell kittens and puppies, how is there “overpopulation”?

– If a community is able to take in impounded dogs from other communities and find them homes, how is there “overpopulation”?

– CATS Cradle Shelter had an incredible effect on the cats in our community since it opened at the end of 2011. Although the other rescue groups helped pull animals from the pounds as well, it’s worth noting what an impact it was to add an extra cat shelter

– Forty-eight percent of impounded cats were killed in our community in 2011, according to pound statistics. In 2012, the number dropped to 15 percent.

*Click on the image or this link for larger view

The general impound procedure is available on the following web sites:

Woodsman, by definition a house cat is not a wild animal, it is a domestic pet.

Lets make 2013 where people actually become educated about TNR instead of passing off paranoia as truth. Where they learn to use something beside Google as their research tools so that they may find the true statistics and see that the only way to keep the number of feral cats down, and keep them healthy, is to take care of the ones that are already there. Where they'll learn than no sick animal is ever released by a TNR program and maybe the reason that people see rabid cats is because they live around uneducated people who won't let a proper TNR program happen in their neighborhood.

Thanks, Melanie! Sounds reasonable to me!

I think the worst part of all, anyone associated with TNR aren't adhering to the mandatory REQUIRED BY LAW SIX-MONTH QUARANTINE for any animal when harvested from the wild and intended for any sector of the pet-trade. This is why rabid kittens are now being adopted direct from shelters without the REQUIRED BY LAW 6-MONTH QUARANTINE (Like this one, Google for: rabid kitten adopted wake county) The 10-14 day holding period for bite & scratch cases is ONLY meant to see if they were infectious at the time of the incident, but DOES NOT IN ANY WAY prove that that cat does not have rabies. The incubation period for rabies can be (on average) from 21 to 240 days. And in some cases as much as 11 months. One rare case being 6 years. This is why when you take your pet to another country they MUST quarantine your pet for a MINIMUM of 6 months to be relatively sure (not 100% certain) that you are not bringing rabies into their country. Giving a rabies shot to an animal that already has rabies and has not been quarantined for AT LEAST 6 MONTHS FIRST does NOTHING to ensure that that animal does not have rabies!

But these TNR advocates, and the veterinarians and shelters and local government "officials" that support them? EACH AND EVERY ONE IS IN *DIRECT* *VIOLATION* OF WELL-ESTABLISHED *NATIONAL* & *INTERNATIONAL* *LAW*. They ALL need to be sued -- fast, hard and so deep that they never recover from it.

Now add on top of that that anyone who feeds these cats is training them to approach humans for food (contrary to them always claiming feral cats run from humans). What happens to the child or foolish adult that reaches down to pet or try to pick up that "cute kitty"? The wild animal lashes out and bites or scratches the hand that has no food for them.

Don't be surprised at the number of search-hits you get or the horrendous stories that go with them. The number of suspected rabies cases and the then required mandatory rabies shots for each individual costing them well over $1000 out of their own pockets, has been growing as exponentially fast as cats breed. Ask a cat-feeder to pay for your shots and lost work-time and suffering? Neither they, nor shelters, nor the local government who supports TNR carry ONE PENNY of liability insurance for the deadly dangers they are bringing to their communities by allowing them to feed and TNR stray cats. Two recent reports even document rabid cats entering a home through their pet-door and one even came through their ceiling searching for human-supplied foods -- one attack so bad it required hospitalization for the family.

Let's make 2013 the year where ALL aspects of TNR are ILLEGAL nationwide. It's the only solution.