Home » Why Do Dogs Lean On People?

Why do dogs lean on people?

Dogs lean on people for all kinds of reasons, depending on the dog and the exact situation. The following are just three of many possibilities: 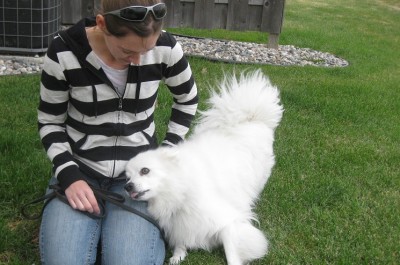 Reasons your dog leans on you

There are plenty of reasons why a dog would lean on her owner. I am oversimplifying things by listing only three.

If your dog is a “leaner” I’d love to hear about why you think your dog leans on you.

Dogs lean on people for affection.

Most dogs love attention and affection. Leaning on us is just one way to seek that affection and connect with the person. We humans are good about giving dogs the affection they’re seeking!

Dogs lean on people for security.

A lot of insecure, shy or fearful dogs will lean into me if I’m a person they trust. They use me as a safety blanket. No one can sneak up behind them if they have their back to their safe person (me). No one can grab them. My foster dog Cosmo (pictured) leaned on me all the time, especially when we met new people or attended new places. I had another foster dog Levi who was also insecure and would constantly sit on my feet.

I remember someone told me “Gosh, he’s so dominant!” But really, it was the opposite. Levi was generally a very submissive and worried dog. He felt safer getting as close to me as possible.

Even outgoing dogs like my mutt Ace need a little reassurance sometimes. It seems like Ace is always trying to do the “right” thing, and sometimes he’ll lean into me for (I assume) some reassurance. Like, “I’m doing OK, right?” This is when I pat him on the sides and tell him he’s being a good boy.

See more tips on how to help a fearful dog. 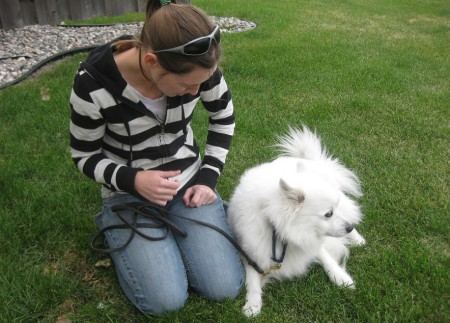 Dogs lean on people for control.

Ace leans on visitors all the time to get them to pay attention to him. Yes, he’s motivated by wanting affection and attention, but he’s also manipulating people to give him that attention. If someone is sitting down trying to focus on something other than my dog, Ace will sometimes go up to the person and bump his side into her. It’s pretty hard to ignore that, and he knows it.

Is this insecurity? No, not in this case. Attention seeking? Yes. Controlling? Definitely.

Other examples of how dogs lean on us to control us:

How do I stop my dog from leaning on me?

It’s not necessarily a bad thing if your dog leans on you. I don’t mind a bit if Ace leans on me (unless he’s just jumped out of the water).

But maybe your dog leans on you a little too often or during inappropriate times. If you’re trying to sit and drink your coffee, you may not want your 70-pound dog backing his ass into you, for example.

Or maybe you’d just like to help your dog lessen her dependence on you. If your dog has separation anxiety, it’s a good idea to look for ways to create mild separation. Requesting her to stop leaning on you all the time would be a start!

No matter what your dog’s motivation is for leaning on people, it’s important to teach your dog some commands that communicate your need for space.

Dogs lean on us to communicate what they want, but it’s also important for them to respect our space. You wouldn’t want your boyfriend hanging on your arm all the time, would you? Our dogs don’t need to be touching us 24/7 either. (Um, excuse me, Ace, but could I please go to the bathroom without you?)

Useful commands all dogs should learn for creating space:

In addition to these commands, you can also just get up and walk away from your dog if he’s leaning on you too often. Every dog is different, so you’ll want to think about your particular dog.

For example, if your dog is constantly leaning on you at the dog park, it’s probably because he’s overwhelmed. You can try stepping away from your dog (and it helps to keep moving), but if he’s still hiding between your legs, maybe you should try socializing him with just one or two dogs next time instead of 15.

Every dog is different, and it’s all about knowing your own dog. I’d love to hear what the rest of you think about this.

Is your dog a “leaner?” Why do you think dogs lean on people?

Whenever I go to hug my 2 year old brindle pit Baby, (she lives up to her name) she always lays her head on my shoulder. I always assume it's her leaning into the hug.

Willow is not a very affectionate pup so when she leans on me I take advantage of it. It not about the D... word it's just how she feels comfortable show affection. If she is scared or unsure then she wants to sit on my lap, she is a bit big for that.

My son's pit lab mix leans against me often I'm female I cared for him for 7 months old to two years...but he adds a special aspect to his lean tail is down...then rubs his back in an up and down motion against me...he loves me a lot...I think he is claiming me..like marking a tree...mine for the moment.. He does this with me not my son or daughter in law...

Our dog leans. He's a 50 pound muscular Boxer/Pit so when he leans it's very impressive. He seems to lean most often when a group of people are in the living room. He seems to like to choose one person (different every time) to really push up against. I get the feeling he's saying "This is my favorite person right now." It's almost like he's showing off his bond with the person he's leaning on. It's so sweet.