Home » When someone must re-home a pet

My dog’s previous owner gave me a gift

“He was probably abused.”

“His owners gave him up. Who would do such a thing?”

These are the assumptions I hear people making about their “rescued” pets. I get it, it makes us feel good if we believe we saved an animal from harm. 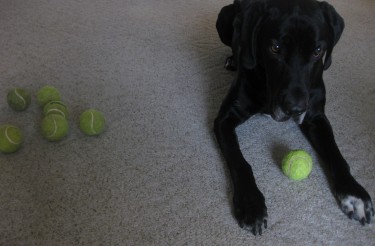 My dog is not a rescue dog. I adopted him directly from his previous owner. Unlike some dog owners, I’m fortunate to know my dog’s history.

Ace was from an accidental “farm litter” near a small town in Minnesota. His previous owner was a single mom and got Ace as a puppy for her teenage daughter, she said. I’m assuming the puppies were free. She did not charge me anything to adopt him a year later, even though I offered her $50 and even though I’m sure she could’ve used the money.

Ace had never been walked, his previous owner told me when I first met my future dog. She also said Ace spent most of his time in his kennel during the day while she was at work as well as in the evenings when he would just get too annoying. I couldn’t blame her. Ace was pretty obnoxious at the time, showing off his worst behavior when I met him – grabbing a towel, licking the cat in the face and climbing all over the couch and my lap. She did not need to tell me he didn’t get any exercise or that he had no concept of “sit” or “stay” or “come.”

How awful that my dog spent his first 12 months living that way, I could’ve said. How sad that someone would re-home a pet after a year.

But that’s not how I see it.

Ace’s previous owner gave me a gift, and I am forever grateful to her. She gave a homeless farm mutt a warm, safe place to crash for a year and then helped him on his way. She may have prevented him from entering a shelter two times – when she initially adopted him and again when she re-homed him herself.

Ace’s previous owner provided my future dog with basic vet care by getting him neutered and vaccinated at the low-cost spay/neuter clinic about 45 miles away. She took the time to kennel train and potty train him.

My future dog got to grow up around a cat and another dog, and he came to me well socialized. I have yet to meet another dog as tolerant of other pets as Ace.

We do not know the details

When I see or hear about someone re-homing or surrendering a pet, I do not respond with judgement. I think of Ace’s previous owner and what a nice person she was and I try to be understanding. I’m sure she has adopted another dog since that day in 2007, and I’m sure that dog is very loved.

Surrendering a pet is not an easy choice, and these decisions are not made overnight. When I hear that someone has to give up a cat because he is moving, I do not say, “Well, didn’t you know you would be moving?” Instead, I try to imagine the difficult situation that person must be facing. I just moved across the country with three animals, and they were definitely a huge burden.

When we hear about someone surrendering a pet, we tend to respond with “How could they?” Perhaps we should say “Is there anything I can do to help?”

What do the rest of you think would be the appropriate thing to say to someone who is re-homing a loved pet?

I had two lab boys surrendered to me. They were pretty much purchased, then put in a backyard and left for a couple of years. I had to carry one of the dogs to my car, as it had never been lead trained. The owner was in tears as he signed the surrender paperwork. When I rehomed the lab boys, I sent the owner a text, saying, "Mack and Jet say thank-you for giving them a chance for a new life." I genuinely meant it.

Your line, "She did not charge me anything to adopt [Ace]... even though I offered her $50 and even though I’m sure she could’ve used the money." really struck me. So many people surrender their pets who genuinely have the pet's best interest at heart, just like Ace's last owner.

In general, I think us pet-loving folk are way too harsh on people who choose to rehome their pets. Often, people rehome pets for the pet's sake, and not for their own. They certainly don't deserve criticism as they make this tough choice.

Yes, they don't deserve the criticism. I agree. Thanks for your example with the two Labs.

What a great story, Sure glad he ended up with You!

We would be better off all around if people were less judgy about everything. I have adopted 4 dogs over the years and sometimes it's hard not to judge, but you are spot on - we should be grateful that they knew enough to surrender the dog (even though two of mine were 'drifters'). Be positive and optimistic - that should be the message to someone facing that tough choice.

My parents re-homed a dog that I had adopted before I went to college. She was a Beagle who needed far more attention than they could give her. I was devastated for a while until I realized that the dog was happier, my parents were happier and her new family was thrilled to have her. I was just being selfish.

If I ever run across the owner surrender form for Belle I think I might call the people and say thank you. Yes she has her issues but she has become a totally different dog since we've had her. And I love every moment!!!

Thanks for reminding me that it is hard to decide to re home a pet. The other hard part, and one that my fiance reminds me about all the time, is you can't save them all. We have two dogs, one for each hand, and I have to remind myself that we made a difference in their lives.