Home » Is your dog judged by his breed?

Does breed matter when predicting a dog’s behavior?

My dog is judged by his appearance.

But is it fair to judge my dog, or any other dog, by his appearance? Of course not. My dog is not friendly because he’s part Lab. He’s friendly because of all sorts of factors, breed being one.

There are plenty of Labs that aren’t friendly. Some are shy, fearful or aggressive. And as with my dog, their breed does not predict their behavior. At least not entirely.

Because Ace looks like a Lab, people expect him to act the way they believe a Lab should act. But my dog has several other potential breeds in his heritage – German shepherd and dachshund, his dog DNA test suggested, among others.

We see a “Lab mix” but the dog in front of us represents several different breeds. 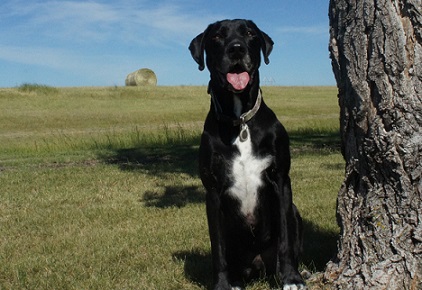 And what about all those dogs out there who truly have a “mutt” look?

What about the dogs that don’t look like any breed in particular? Do those dogs have an advantage because we don’t place our assumptions on them?

Take this brindle dog Chester, for example. When I look at him, I do not see any particular breed. The first time I met him, I asked his owner what kind of dog he is and she said, “I don’t know.”

If we don’t see any particular type of dog when we look at a mutt, we won’t assume he should fetch or “love to run” or have a strong “protective drive” or a herding instinct. We allow him to just be a dog.

Wouldn’t it be nice if all dogs had that advantage? If we could only see “dog” first and then observe his actual behavior?

Think about it. If we did not judge dogs by their appearances:

So what do you think?

Do people judge your dog based on his appearance? Is that fair to your dog?

Interesting article; I've never thought about people judging dogs based on their looks! When people see my dog they see a lab too; She looks very similar to a purebred lab, so it's rare that people ask her breed. That annoys me. She's different than a lab: She doesn't retrieve, rarely wags her tail, doesn't like swimming, and isn't a fan of other dogs.

She's a perfect example of why people shouldn't judge a dog by her looks.

D.O.G. is your typical Lab.... Mix. Except on Saturday when we were at the vet. He was very vocal on this is my space. Thankfully the only other person was another lab owner and an experienced one at that. She asked if she could give him treats and he warmed right up to her.

Belle is the one we get the most, "Oooo what breed is that?" I say Pointer mix and most Pointer people agree, the fun one was the mom who said, "she looks like a pit, I don't like pits." My answer was to smile and say, "well if she is, she is, and she's on a lead, she's not going to hurt anyone." I've also gotten, "Ma'am your dog is sexy!" That's right, my spayed mutt is sexy!

I must say though that I am pretty darn proud of both of my dogs. Today is day 81 at a hotel and they have barked at a couple people who scared them, but otherwise they have been friends to everyone who has crossed their path, espeically since most of the time no one asks if its ok to pet my dogs! :-)

My weird dog definitely gets the benefit of being an attractive and unidentifiable mutt around strangers. Of course, he can be very sweet with people and looks adorable, and then they can be surprised when a less pleasant behavior emerges or often don't see it & think I imagine thinks and make up stories. I'm just glad he isn't spreading negative attitudes about certain breeds!

People do judge my lab for being a lab. But she is pretty lab-like. So it usually works out. Sometimes, I think people let their annoying/rude dogs get into her space too much without expecting her to be "mean" like another breed. If that happens, though, she lets them know in dog-speak that she doesn't like rambunctious dogs in her face. Sets them straight. Haha.

Our dogs are judged based on their breed, but in their case, it's positive. Rodrigo barks at cyclists and they understand that's his herding driving kicking in (sucks that this is the one time that it kicks in) and Sydney tends to gain easily, which is the labrador in her.

I couldn't imagine dealing with bully breed haters like my girlfriends do - that would drive me insane.

While it isn't fair to judge a dog by looks, Poodles make terrible police dogs because no one will take them seriously as law enforcement operatives. Even the sweetest GSD or Belgian Malinois looks intimidating.