Home » Do nail caps stop a cat from scratching?

It’s been two years since I wrote a product review of Soft Claws. Soft Claws are nail caps you glue over a cat’s claws so when a cat scratches he does not do nearly as much damage to furniture and carpets. The caps may even decrease damage by 100 percent, although that’s just a personal observation – not a company claim.

Soft Claws are also sold under the name Soft Paws and are often marketed as an alternative to de-clawing. I agree. If you are thinking about de-clawing your cat it’s worth it to give Soft Claws a try first. Check them out on Amazon (affiliate link). I’m glad I did not go the de-clawing route with my cats when we got a new couch two years ago.

After using Soft Claws since then, I just wanted to say I still recommend the product. It’s worked really well for both my cats. There was definitely a learning curve on my part. It took me a few tries to get a good gluing system down. It also took a few tries before I learned exactly how short the nails should be clipped beforehand and how much glue to use. If the nails are too short, there’s not enough nail for the caps to stick to.

Pros and cons to Soft Claws nail caps for cats 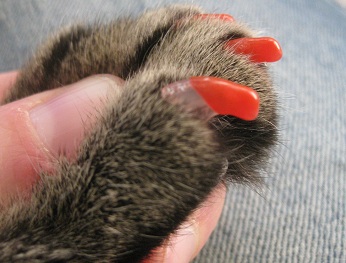 1. The caps prevent nearly all scratching damage, at least from my two hellions.

2. My cats don’t seem to notice they’re wearing the caps after about five minutes of wearing a new set.

3. Buying a set of nail caps for about $18 is cheaper than a declawing surgery (although the costs of the caps could be more than declawing over the longterm).

4. The nail caps are a kinder solution to the cat if you believe declawing is inhumane.

5. The caps stay on very well once you figure out how to apply them. There is definitely a learning curve for the human administering the caps, and some people give up and blame the product.

2. You have to remember to take the caps off at least every eight weeks or the nails could grow too long for the caps and begin to feel very uncomfortable for the cat. (They don’t always fall off within eight weeks as the company claims). If you use too much glue – like I sometimes do – the caps are difficult to remove after eight weeks. You have to use a lot of force to pull them off, and this is uncomfortable and possibly painful to the cat.

3. The nail caps decrease the cat’s ability to defend himself. Although most house cats rarely need to use their claws for self defense, there are times when they might. Luckily my cats seem to have mastered the skill of simply making eye contact with a dog to show him what’s up and who’s in charge.

4. Some of the caps might fall off, especially the first couple times you administer the caps. If you replace them as they fall off, it becomes difficult to remember which caps have been on for how long. You’ll throw some away before eight weeks are up.

5. The system for applying the caps is not perfect. Each set comes with a few applicator tips which are used to transfer the glue from the glue bottle to the nail caps. There aren’t enough of these tips, and you will definitely run out of them before you run out of glue or nail caps. These tips are not designed to be reusable because the glue is not easy to rinse out of them before it dries. I solved this problem somewhat by using a pin to break away the dried glue.

All in all, the Soft Claws are a product I would recommend to most cat owners requesting a way to decrease the damage caused by scratching.

How about you? Have you tried Soft Claws or a similar product?