Do any of you have dogs that try to mark in the house?

How did you stop or prevent the behavior?

I just about died when my parents told me my dog Ace had peed on their indoor plant. It’s funny to think about it now, but at the time it wasn’t funny!

Since then I’ve been extra cautious when bringing my dog into other people’s homes. He stays on the leash or near me so I can supervise.

Indoor marking is a fairly common problem with dogs, and it’s one of those frustrating behaviors that might cause someone to surrender his or her dog.

So, I’m hoping we could all share a few tips to help each other out.

Sometimes new dog owners are unaware that marking can be a problem, especially on the first day home when everything is new to the dog. The new owners may be shocked when the “potty trained” rescue dog pees all over the cat’s scratching post (yep, seen that happen a few times).

As with all training topics, I’d love to hear your thoughts. Here are some of mine:

Tips to stop a dog from marking in the house 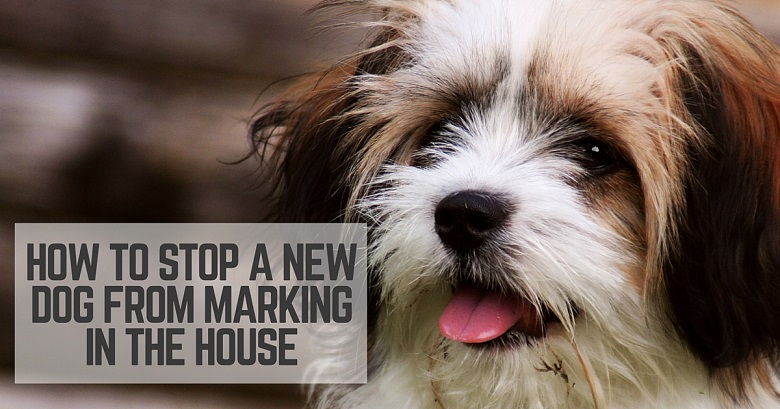 When I bring a new dog into my home, I keep the dog on a 6-foot leash and near me at all times. I do this even if I’ve been told the dog is housebroken.

A dog that is potty trained could still attempt to mark in a new indoor area. Marking is not the same thing as having an “accident.” I’ve also learned from experience that just because a dog is potty trained in one home does not necessarily mean he knows what to do in another home.

If I can’t supervise, then the dog stays in a kennel or at least in a smaller part of the house such as a bathroom or laundry room. 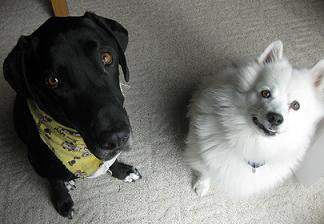 After some serious supervision and prevention for a day or two (sometimes much longer), I would give the dog more freedom.

I do everything I can to prevent or stop the dog from marking. Ideally, I will redirect his attention by calling his name or asking him to sit well before he has a chance to mark, but if it’s a close call I will break out my more serious tone and say “Hey!” or “No!”

This of course should be followed by praise for an appropriate behavior such as sitting.

Keep an extra eye on your dog around cat scratching posts, the ends of the couch and spots where other dogs have had accidents in the past.

A belly band fits around a male dog’s belly, covering his man parts so if he does mark it will go onto the belly band instead of onto your furniture. It’s kind of like a diaper, only it’s designed to catch small amounts of urine. The ones I’ve used were washable and reusable. 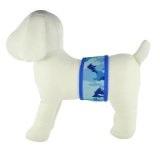 A belly band does not train the dog to stop marking, but it’s a helpful tool to have while he’s learning. Boy was this a life saver when I had certain foster dogs!

Female dogs can also mark in the house, by the way. If it’s a real problem with your lady dog, you could try using a doggy diaper for the time being. Just take it off her when you take her outside to go potty.

Once the dog seems to have stopped marking in your home, it’s a good idea to keep bringing him to new areas so he can learn appropriate behavior in other situations.

You’ll need to supervise him very closely, of course. Be ready to correct him or redirect his attention. Carrying treats and asking the dog to sit or “watch” is a good way to keep his attention on you rather than sniffing and potentially marking your friend’s couch.

Pet stores are good places to practice this, since there are lots of tempting dog smells. You could also try visiting a tolerant friend’s house.

When your dog relieves himself or marks outside, tell him he’s a good dog. Sometimes we forget to reward the basic behavior, but it’s really important. 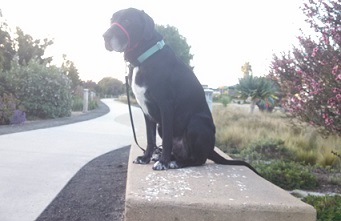 There are certain outdoor objects I don’t want my dog to pee on such as park benches, so I make sure to re-direct his attention around them and reward him for peeing on the bushes or trees. He is almost 8 years old and the training never ends.

Finally, what do you guys think about spaying and neutering?

I know the majority of readers are in support of spaying and neutering most pet dogs. But does it actually help prevent unwanted behaviors such as marking?

In my limited experience with unaltered dogs (male and female), I have noticed that these dogs were more likely to mark in my house.

This does not prove anything. It’s just my limited observation – I’m talking about four or five unaltered dogs total compared to about 50 altered dogs. I also know a few owners who have unaltered dogs, and they say they have absolutely no issues with their dogs marking in the house.

I’m sure it mostly depends on the amount of training the owner is willing to put into the dog, regardless of whether or not the dog has been “fixed.”

What are your thoughts?

I hope you’ll jump in and share your experience.

*Can I just add that my dog did not lift his leg once for the first two years I had him? Not once. He was a squatter. He started lifting his leg when he was about 3 or 4.

I'm so glad I found this article! I have an unaltered 1 year old corgi who will not mark inside our house but he will every chance he gets outside, whether that be at a friends house, pet store, hardware store, etc. It's driving me crazy and I'm thinking about hiring a behaviorist simply bc I don't know what to do but your advice/story has given me hope!

I've had experience with marking behavior because I foster dogs often. I think it's easy for a dog to make a mistake with a houseplant because it looks like what he pees on outdoors. When I have a male foster dog I also make a point of picking up all baskets from the floor. I suspect they look and probably smell like tall grasses outdoors and are confusing. Baskets are also not easy to clean! I know that some of what I'm talking about is urinating, not marking... but it's still a good idea to remove baskets if there's any doubt! Thank you for your pointers; I'll try the leash thing next time I foster a squirty little guy!

Guess I'm lucky but our Alfie seems to understand the general 'no peeing indoors' rule quite well. With one exception - we had a friend's dog over for the day and both dogs were happily chewing their bones - when Alfie's friend was done and got up, Alfie quickly walked over to his spot on the floor and peed! :-)

We were at a Greyhound shelter to pick out a greyt dog. Unfortunately I was wearing a long brown skirt. One of the males thought I was a tree! Nope, didn't adopt that one. My little Italian greyhound marked my daughter's new stove everytime we were there. Go figure.

Yep, I am way too familiar with this...