The following is an interview with Tegan Whalan, a border terrier breeder and rescue volunteer who maintains the blog Some Thoughts About Dogs.

We can all learn from her experience with “both sides” of the dog world — breeding dogs and rescuing dogs, and how these “sides” aren’t as divided as we might think.

As she puts it, many of us love dogs and there are a lot of ways to show that love of dogs.

How breeders and rescues come together to help dogs 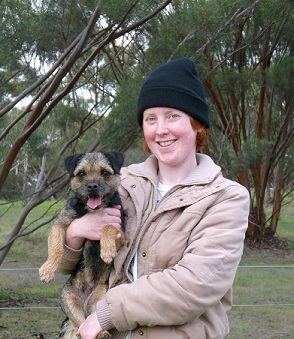 That Mutt: Why did you decide to start breeding dogs?

Tegan Whalan: It’s embarrassing to say I don’t have a good answer to this.

When I was 14, I got my first border terrier after about a 6-month-long wait for the litter to be born. In this time, I formed a relationship with the breeder, and somewhere along the lines it just became assumed that one day I would breed dogs.

In those 6 months I learnt about the sport of breeding “the perfect dog,” and I got a little bit suckered in. I knew my next border terrier would be a bitch, with the intention of breeding a litter if she was of suitable quality. Luckily these plans all worked out.

TM: Why did you decide to start fostering dogs?

TW: I got suckered into this too!

I frequent the Australian dog forum DogzOnline.com.au, and I saw a gorgeous little wirey dog at risk of euthanasia in a pound 14 hours from my home. I made the fateful comment that I would “love to help” but I’m “too far away.” Before I knew it, this dog had been bailed from the pound and was flying to my hometown for me to foster and rehome. An example of the awesome networking rescues can do!

Unfortunately, I wasn’t in a situation to foster for about a year after, but then I started to get more and more involved. I firstly fostered greyhounds (ex racers) for our local Greyhound Adoption Program, as I just loved the temperament and enjoyed “knowing what I’m getting” when it came to fostering these guys. Over time, I started having dogs privately surrendered directly to me, and I started being responsible for all elements of dog rescue.

TM: Is it common for breeders to be involved with dog rescue groups?

TW: Most breeders tend to be involved only in the rescue of their breed. I don’t know any other breeders in my state who are involved in all-breed rescue, but I have had more than one offer me kennel space or donations in times of need, especially for their own breed.

TM: What are some of the other ways rescues and breeders can work together to help dogs? 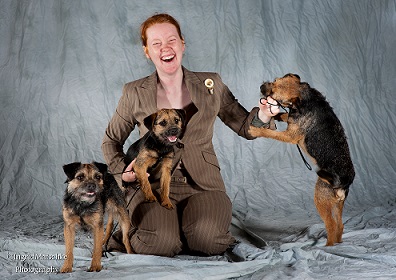 TW: How can breeders help rescue?

Breeders who have kennels are very valuable to rescues. In the case of my rescue, our biggest problem is not finances or even transport, but actually having space to put dogs until they find a home. So if breeders were able to offer a kennel or two to rescue dogs, that would be a big help.

There are some breeds that I think need breed-specific homes, so if breeders can offer to rehabilitate and rehome even their own breed, that’s a great help as well, especially if they have a “special” breed that have particular rehoming requirements.

Further, any assistance with transport or finances is always good when it comes to rescues. If breeders are travelling for shows, maybe they could offer room for dogs in need, too.

How can rescues help breeders?

If a dog comes into rescue and the breeder is identifiable, they should be contacted. You never know what that breeder is like or what lengths they’ll go to to help their own dog. Many breeders are very grateful for rescues providing this service.

TM: When rescue groups and breeders refuse to work together, what opportunities are lost for the dogs?

[quote_left]”The hostility many rescues hold towards breeders means many breeders are put off from helping rescue.”[/quote_left]

TW: To be honest, I don’t know too many breeders who are not supportive of rescue and the resources they put into finding disadvantaged dogs new homes. I would say that most breeders are willing to help rescue, but don’t exactly know how to go about it. However, the hostility many rescues hold towards breeders means many breeders are put off from helping rescue.

How does this hurt the dogs?

If rescues ostracize and discriminate against breeders, they are losing a valuable resource. Many breeders really like dogs, including rescue dogs, and want to help them. This help can be finances, kennel space, networking or knowledge. If rescues do not communicate in an effective and pleasant (or at least civil) way with breeders, they may be “burning bridges” when it comes to the help that breeders can provide.

TW: Puppies, rescue or border terriers, I am always happy to see go to new homes. I don’t know what the appeal is — puppies are hard work! After spending up to 8 weeks cleaning up after them, I am very ready for them to go to their new home, and for me to have a sleep in. When puppies go to their new home, I am just happy to finally get a break.

However, when it comes to finding new homes for puppy rescues vs. puppy border terriers, the experience is very different.

I have about two inquiries a week about border terrier puppies, and families have waited for 6 months or longer for a puppy from one of my litters. This means most of my border terrier puppies have a home before they’re even on the ground, and a home that I’ve known and been communicating with for a long period of time.

When it comes to rehoming adult dogs, it really depends on that individual dog. Like puppies, there are some adult dogs I can’t wait to see in a new home … Most of the time, I’m just happy for a dog to have found a great new home. I’m happy to have my house a bit emptier, have a little bit of time to myself, before the next one.

TM: How do you stay in touch with the families? 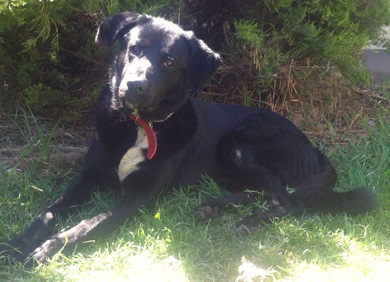 TW: When dogs go to new homes, I get in touch a couple of times over the first few days. Rescue dogs typically come with a two-week trial, so I get in touch at the end of that two-week trial. Unfortunately, I can’t “make” purchasers stay in touch, and at the two-week mark I say that I won’t be hassling them again, but I’d love to have pictures and updates. Some follow through with updates, some don’t. Unfortunately, once it’s their dog, it’s their dog.

However, I do send a Christmas card out every year to all the dogs I have rehomed, including puppies I’ve placed. I get a good response rate to this Christmas card, with many people sending a card back with a photo or two, and some people just phoning me and giving me an update.

This once-a-year contact works well for me (less admin!), but it seems like it is well received — it’s undemanding and unobligatory.

TM: Why do you think there are so many misunderstandings out there about breeders as a whole?

TW: I think there are three main myths that tarnish the reputation of breeders:

First, “Breeders make a lot of money, and breed dogs for the money.”

I’ve addressed this on my blog (and you’ve kindly shared this), but basically, no, I don’t breed dogs for the money. If that was my goal, I am terrible at reaching my goals. I have lost a lot of money from breeding dogs.

I breed dogs because I love dogs and my breed. I don’t even really like puppies, but you unfortunately have to have a puppy to get a dog. While rescues are expected to lose money and work off donations, breeders are expected to make money. I’m a lot closer to breaking even in rescue than I am in breeding!

Second, “There is an overpopulation of dogs, and breeders breed dogs despite this.”

Clearly, there’s not an overpopulation of dogs — both you and I have blogged about this plenty. There is a killing of pets in pounds, but you’ll notice that it’s the facilities that are killing pets. Breeders rarely have dogs or puppies leave their premises in body bags. Who’s the real baddie here?

Third, “Spay/neuter is the only way.”

This ties into the overpopulation myth, but is a separate entity in itself. Not only should people desex their pets to stop the overpopulation, but because desexing shows you’re responsible and is healthier for your pets — so the saying goes.

In summary, because breeders are believed to be money hungry, and that they lack empathy to the dog population and to their individual dogs, they are often used as a scape goat by rescues. There are all misunderstandings — if you take these away, there’s nothing bad about breeders!

TM: Is there anything else you would like people to know about your experience breeding or fostering dogs?

TW: Do I get a high out of rehoming dogs? Absolutely, I love to see dogs in new homes.

One of the things that make me maddest is the way many rescues treat people who choose to rehome pets. These people are often undergoing a lot of stress in their lives, and to target and criticize these people is misplaced and insensitive.

Conclusion: Please be nice to people.

Do the rest of you have any examples of how breeders can help out rescue groups?

Get That Mutt’s weekly newsletter in your inbox:

Get to know your breeder. Period. If you like them get one of their pups. It's a lifetime commitment find someone you don't mind conversion g with. Yes it truly is that simple. You do not need a list of rules from any animal rights group, in order to decide which breeder you want to buy a pup from. ;)

This is a great interview! I feel like I already knew these things, but it was a really good refresher. I encourage people to adopt rescue dogs, but I have had dogs from shelters, a puppy mill as well as ethical breeders. The breeder we got our Keeshond from was absolutely the best! She cared so much about her dogs and the puppies. I have not read Tegan's blog before, but I am glad to have discovered it!

I really enjoy Tegan's blog posts. I think you will too.

Reading about picking up after puppies for 8 weeks and getting a good nights sleep brought back flashes of fostering litters of puppies in a former life.

@Lindsay or @Tegan, do either of you have a blog post or can you comment on how to choose/find a reputable breeder?

That has been on my list of things to write about for about a year. :) I've never gotten around to it. I hope Tegan has something.

I've only written about the pros to buying a dog from a breeder, but not about choosing the right breeder. http://www.thatmutt.com/2011/06/27/reasons-to-buy-a-dog-vs-rescue-a-dog/

I love the picture of her laughing!! Dogs do bring such joy!

Its nice to see and hear about different people and their love of a breed but also of the fact that there are dogs in need. It does bring about a different way of thinking of rescues and breed specific rescues.

Thanks for always bringing a fresh perspective!

Haha! I love that picture too. It's impossible not to smile when you see it.

Great post. It's a shame that rescues can't leverage breeders for their knowledge and love of dogs rather than resent them. I bred my first Lab, Maxine and now I do rescue - they two commitments are compatible.

Oh I didn't realize you had bred one of your Labs.